Dexter – Smokey and the Bandit

Last week, plot progression and some fantastic acting made “Once Upon a Time...” a very strong episode in my eyes, perhaps one of, if not the best since the close to season four. I’m not sure then if it is a very short term case of nostalgia or simply the content itself that made “Smokey and the Bandit” not quite live up to its predecessor. The episode was good. Episodes of Dexter are always good, but it suffered somewhat from a lack of direction. The plot was a mixture of continued story progression along with a throwback to Dexter’s past that just didn’t quite work for me. While the season premiere had the blast from the past down cold, with Dexter getting to relive the awkwardness of high school, this time around the story was just a little too isolated to have any real impact. That being said, like with many of his victims, Dexter took something away that seemed to grow him as a person, somewhat redeeming what just did not work for me.

That which didn’t quite pull me in was a new case for Miami Metro that mirrored serial killings that Dexter had followed as a pre-murderous child. The main problem that I had with this particular round of hunt-the-killer was that it took too much of the episode’s screen time for too little investigation. More often than not, Dexter is just about certain that his target is the killer and has to break into a house or get DNA in some clever way, then run it, prove they’re the killer and devise some scheme to inject and ultimately do away with his victim. That is pretty much what happened here, but there was just too much extra. To get close to his target - an 80’s serial killer known as “The Tooth Fairy” - Dexter inserted himself into a retirement community and proceeded to play golf and go shopping with his target. Whilst the ends ordinarily justify the means, this time around I just didn’t buy it.

I can appreciate the writers trying to keep things fresh by having all of this take place on Dexter’s days off, but that difference in the approach is exactly what made my interest drift. Taking Dexter out of the work environment for the majority of the episode and not showing any of the actual police investigation into the murder deprived us of what are usually Dexter’s best inner monologues. There was no sarcastic running commentary as he listened to incorrect theories by his colleagues and there wasn’t nearly enough shared screen time between Dexter and Deb following her transition into her new job. Nevertheless, as I said before, there was a redeeming quality of sorts to this particular case. After finally getting his man and killing him in an unusual method, Dexter got an opportunity to reflect on his legacy, having just taken down a particularly old killer. Although the outcome of that reflection hasn’t yet been fully realized, it at least gave some longer term meaning to an otherwise forgettable hunt.

Outside of all things Dexter, Deb stole a few minutes of screen time this week settling into her new role as lieutenant. Although it hasn’t yet been fleshed out, from what little we saw of her, it is easy to see that the role really works for her character. After her shock from rising to power last week, I was expecting to see Debra struggle somewhat, having no real social skills in a job that requires a commanding presence. However, she handled herself fairly impressively despite LaGuerta’s repeated attempts to do her job for her and the plot also very casually introduced a new character into the mix. Until now, I had forgotten that a new detective was joining the team (as per the flood of press prior to the season premiere), but the forty seconds of screen time devoted to his arrival were more than enough of an introduction to see that on a grand scale, even Quinn isn’t that much of a dick. 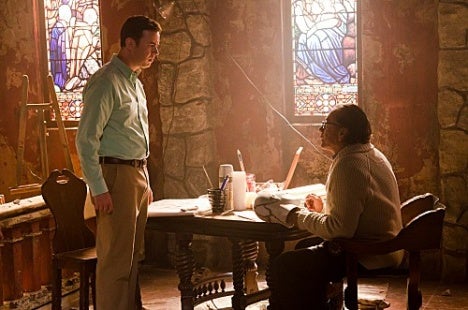 Elsewhere, we finally got to see the inner workings of Travis and Professor Gellar’s kill-crazy madness after their kidnapping of a man last week. In a run down church, the two held the man, demanding that he repent for all of his sins in order to be ready for something that they had planned. While we know their motivations to be religious in nature, with particular attention to things of the world ending variety, with so little said between the two or any kind of investigation on the police’s end of things, at the moment they just come across as crazy. They are devoutly religious, yet murderous. Worse still, they seem to live by a code of sorts that hasn’t been at all defined, making everything involving them right now just a little confusing. When all is said and done, that lack of dialogue was made up for with the episode’s concluding scene, in which the captured man is revealed to have been murdered in a particularly twisted way. With his body presented to the public in a horrendous way, whatever their plan may be, it is definitely in full swing.

Being such a massive fan of the show, I really don’t like to say bad things about it, but “Smokey and the Bandit” just didn’t live up to the quality of the season so far. Ten minutes of Dexter’s hunt could easily have been cut and replaced with genuine insight into Travis and Professor Gellar’s motivations or their process. Similarly, Brother Sam made only a fleeting appearance after so many strong scenes just a week ago. As I said at the top, the episode wasn’t at all bad. It remained completely watchable and entertaining, it just wasn’t what it could have been. We’re now a quarter of the way into the season and will be a third by next week, and we as viewers still don’t really know what’s going on. The mystery element can definitely work as a device, but it requires that the payoff be worth the wait. I can only hope that this is going to be the case.