Dexter – This is the Way the World Ends

Where do I begin? Before talking about the episode itself, I suppose it’s appropriate to take a quick look over the season as a whole, allowing me to come to some general conclusion about it by its termination. If you’ve been keeping up with my reviews, it hasn't escaped you that my ratings for this season of Dexter have been fairly, if not very, positive. However, this is not necessarily a reflection of show's quality, or rather, it is not only a reflection of its quality. As a long-time fan of Dexter and an even longer-time fan of Michael C. Hall, I tried fairly hard to avoid bashing it and even went so far as to defend its weaknesses on some occasions. However, now that it’s all over, I don’t really have any legs to stand upon.

Early in the season there was hope. With episodes in hand, there are always innumerable possibilities about where things are going and as I pointed out last week, season six has ticked along fairly slowly. So, with things close to the chest, there was still some mystery. Brother Sam came into and swiftly exited Dexter’s world, which was the true beginning of the season’s downfall. But nothing takes the “ruined the entire season” trophy quite like Travis and his imaginary friend. It’s easy to see where the writers were trying to take this story and why they went the direction they did (somehow, it seems that a fair percentage of the populace of the internet were genuinely shocked by the reveal, thus validating the attempt), but it just didn’t work for me and many others.

With that, (amongst the few other barely notable things that happened) we come to the finale. It is important to point out that, much like the rest of the season, “This is the Way the World Ends” wasn’t bad. It just wasn’t good either. The finale sadly fell into the trap of mediocrity like the majority of the season before it, this time by going to the only place that I posited that it could go. The only genuine shock of the episode came almost immediately, when Dexter was picked up by a (presumably Cuban) boat smuggling people into the US. After the captain turned on his passengers, our hero wasted no time staking him through the chest with a harpoon in plain view of the famished cargo, but that really is where the surprise ends.

Most of the episode was then devoted to absolutely nothing at all happening. With his tableaus complete, Travis sat around waiting for the world to end while Dexter accepted the high likelihood that he and the witness wouldn’t cross paths again. Deb spent some time being awkward around her brother after accepting that she is in love with him (which was a big leap from a dream last week) and Quinn and Batista continued to butt heads over Quinn’s continued apathy towards his job. Not until Miami Metro found his hiding place was Travis forced to do anything of importance, opting to take up residence for a few hours in Dexter’s apartment, assuming that it would empty following his “death.” Needing one final sacrifice to secure his passing into eternal bliss, Travis then set his sights on killing the devil spawn that is Harrison when he discovered his existence, something that his father was less than happy about.

As just about every officer of the Miami police force rallied to find Travis’ point of ascension, Dexter used his inside knowledge to beat them to the punch and the long and short of it is that more experienced serial killers tend to win head-to-head bouts. After (somehow, seriously, how?!) anticipating that his M99 may be turned against him once again, Dexter switched it out for a fake allowing him to both get the drop on Travis and save his son. In a final affront to God and his wayward witness, Dexter then took Travis back to his abandoned church for the kill and in the most predictable twist ever, Deb arrived just in time for the good part. Despite being six years in the making and providing the first cliffhanger to a season that the show has ever had, the moment was just thoroughly underwhelming.

Last week, I specifically called it out, but it should have been fairly obvious for several weeks that the season had been building to either this, or some other fantastical ending. With Travis, the show was presented with a unique opportunity to make killing personal to Dexter and yet keep him out of the limelight, as the biblical and spectacular nature of his crimes would distract from the connection. Sadly, that option was swayed away from with the failure of Wormwood and we were just left with this pile of mediocrity. Worse still, despite it being about time that Dexter’s secret was revealed to someone that he isn’t going to silence, we don’t even know where the writers are going to go with this and I'm very nervous about that, given how this season turned out. 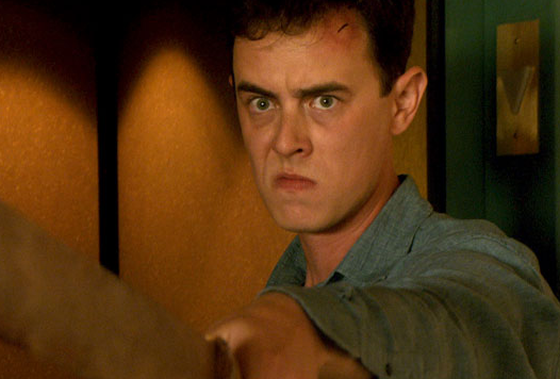 Logic would dictate that season seven should pick up with the most important scene in the show’s history, continuing immediately after the final events of “This is the Way the World Ends” (for all we know, the scene has already been filmed, as Colin Hanks isn’t likely to come back and guest star as a corpse) and having Deb decide then and there where this show is going to go. I see no way that she is going to turn her brother in, but she may decide to shun him despite her love, given his extra-curricular activities. However, we just don’t know. There are quite a few approaches that could be taken. The show could just as easily time jump to Dexter and Deb living on like she doesn’t know or, God forbid, they actually blow the moment and have Dexter drug his sister out of the memory of what she saw.

Speculation about important things aside, the season finale also left us with another pointlessly unanswered question. Unless he is intended to be the new big bad for next year (which would be a horrible idea), Louis is a new character this season that makes no sense in the scheme of things. For some reason obsessed with Dexter (although there is seemingly no way for him to know his secret) and serial killers in general, he has begun some odd mind game with our hero by sending him a strange message with the prosthetic hand that his brother was obsessed with. We have literally no idea why he’s doing this, and despite me never mentioning him or the message, it has been one of the more prominent sub-plots of the season's back half. Why you would introduce a story like that and give it not even a semblance of payoff is beyond me.

The aforementioned Quinn and Batista troubles also took an odd twist as the episode wound down, with Angel opting to force his partner out of the homicide department given his reckless behavior. Getting rid of Quinn would have actually been about the best part of the finale. That is, of course, up until the entire thing was 180’d and Quinn used a loophole in department policy, by which admitting that you’re an alcoholic means that you can’t be transferred or fired (if that is a genuine policy of any police department in America then I fear for us all). Other than that, LaGuerta seems to have had a personality transplant since last week and that is all she wrote.

As I said I would at the start, this would be the paragraph in which I sum up my feelings on this season of Dexter. Perhaps more so than ever, I’m really not sure what I think. Ignoring how incredibly predictable it has all been, season six did tackle bigger issues than anything that has come before it and did so in a completely fresh way. After five years of killers, finding a new approach couldn't have been easy and the writers should probably be commended for at least trying. With failed relationships left, right and center for Dexter and Deb, bringing in this love connection is a brave move and taking on the subject of faith in an amorality tale like this is no simple task either. Just about everything could have been done better than it was and this cast is getting just a bit too large to be sustainable at this point, but when it comes down to it, there is a reason that we’re getting two more seasons of this show. It might be syndication, but the general quality is likely a factor too. With that in mind, I'd be hard pressed to call the season bad, but it may well be a contender for the worst that the show has had in its run, at very least a shoe in for most pointless season.

- What was the purpose of the character of Ryan Chambers in the early part of the season? She stole and sold the hand that Louis ended up with and sent to Dexter, but is that just coincidental? If so, why wasn't Louis brought in immediately?
- What is the likelihood that a boat would just so happen to pass the exact spot where Dexter was floating and how did he not see it coming from miles away and actively attempt to flag it down?
- Why did the entire department (conveniently) wait for Dexter to show up when the two bodies were found in Travis' hideout?
- Are we seriously supposed to believe that the house wasn't swept for potential suspects or further victims and that no one saw the mural?
- Why did the sister who let Harrison leave with Travis not seem to notice that he had completely changed his clothes or find it strange that he was still wearing the mask well after the pageant was over?
- How did no one notice Travis casually strolling down the street with Harrison? Why did he even risk the exposure?
- Why didn't Dexter poetically kill Travis with his sword?
- Is Dexter going to lie and claim Travis to be his first victim? If so, is Deb really going to be stupid enough to not connect past events with her brother?
- With LaGuerta climbing the ranks, are we going to see another promotion for someone we know or are we getting yet another new character next year?
- With Gellar's lack of corporeal existence and Deb's out-of-nowhere love, is the show slipping from reality in an attempt to shock us?