Dexter – Those Kinds of Things

After almost ten months off our screens, Dexter returned on Sunday with “Those Kinds of Things,” an episode that just about perfectly set up the season ahead, while remaining thoroughly funny and dramatic throughout. Taking place around a year after the events of last season’s finale “The Big One,” the episode picks up with Dexter in high spirits, with basically everything in his life going right for once. Admittedly his wife is still dead and his next love Lumen is gone, but things really are on the up for everyone’s favorite serial killer. Although I knew the time jump was going to happen, I was pleased to see that it was well executed. It would have been easy to have season six come back just a few months or even weeks after season five and have Dexter be depressed and kill-crazy, but instead, the writers took a leap with all of the characters and it worked very well.

The opening scene should also be commended for showing us what has to be the coolest way that Dexter has ever attacked his victims. With Dexter dialing 911 claiming to have been stabbed, there was a moment of genuine worry that things really weren’t going so well for him. That is, until the two paramedics who came to his aid got a shot of M99 in the neck for their troubles. Both being part of an organ harvesting ring, Dexter quickly disposed of them and on went the show. Back in the real world, we were introduced to Dexter’s new babysitter (Batista’s sister, Jaime), and also to the knowledge that Dexter had bought the apartment next door to his own. Whether the two apartments are to keep the two halves of Dexter separate is unclear, but as Batista himself pointed out, it makes it very easy for him to come and go unnoticed.

The much touted religious tone of the new season then came into light. The next morning, as Dexter and Deb looked around a catholic pre-school recommended by Angel, there was a fairly hilarious (but awkward) scene where one of the Sisters posed questions of faith to Dexter. While he initially felt nothing for the power of religion, by the episode’s end, he did come to accept that perhaps Harrison would grow up to be a person that wanted to think about “Those kinds of things.” The remainder of the episode was then divided between setting up where everyone else was in their lives, introducing us to the new bad guys, and having Dexter get his kill on. With the year passed, things have changed somewhat around Miami Metro, most notably with Angel and Maria. Despite looking like they worked things out towards the end of the fifth season, the two are now divorced, something that hasn’t necessarily damaged either of their careers.

After getting dirt on Deputy Chief Matthews, LaGuerta finds herself being promoted to Captain. What this means for her character in terms of screen time is hard to say, as she has always been a central character, but when Matthews was the Captain he barely appeared at all. With the Lieutenant position now open in her absence, Batista has also been promoted on a short-term, but likely long-term basis. Although it wasn’t addressed in the episode, one can safely assume that with LaGuerta and Batista moving up, one of the Detectives in homicide must also be looking at a promotion to Sergeant, and as Deb and Quinn are the only two we actually care about, they’re more likely to be in the running than any others. Despite having become more central to the story over seasons past, Deb and Quinn’s involvement in the premiere was fairly minimal.

Although the murder case that set up the big bad guys of the season belonged to them, their screen time was mostly devoted to personal issues, namely, Quinn asking Deb to marry him. While he didn’t actually get to do it, due to a gunman interrupting their date, one can assume that things have been going well for the two of them in the missing year and that he’ll get around to it at some point. Even Masuka joined the ranks of noteworthy character change this week, as he spent the episode shepherding around a group of potential interns from a university course that he teaches. Naturally, one of them is extremely attractive and, although she amazingly isn’t the first choice for the sole intern position, when number one faints at a crime scene, she’s in. 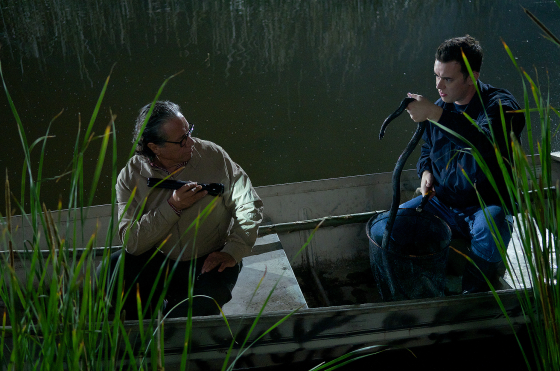 Hot girls aside, the two most important new characters to the show this year came in the form of Colin Hanks and Edward James Olmos. If you look around the internet you’ll know who they are and what they’re doing, but from the episode itself, very little is learnt about the two. We see them searching the Everglades for a pregnant snake and then witness the beginnings of a murder by Colin Hanks’ character before the case is taken up by Miami Metro. Disemboweled, the victim is found washed up on shore with "Alpha Omega" stitched into his stomach, and when Dexter cuts some of the stitches, the aforementioned snakes come out to play. Although there is obviously a religious basis for what the two killers are doing, as of yet, their motives are unknown. The man killed is seemingly innocent so they aren’t cut from the same cloth as Dexter, but at the same time they are both religious, making murder supposedly wrong.

With one brand of murder done, the other is left to Dexter as he attends his twenty year high school reunion. Of course, having had a fairly poor childhood, Dexter isn’t just there to hang out with old friends, but rather, to kill someone. When the only girl that was ever nice to Dexter in school committed suicide three years previously, he had his suspicions that all wasn’t as it seemed. Thinking her husband - the jock king and football quarterback - was responsible, he needed a blood sample to prove it. After awkwardly making his way through the reunion, finding out that his looks and interesting job make him popular, Dexter gets his man by throwing an elbow in a game of flag football. Confirming that he is the killer, Dexter lures him into a secluded area of the school, then straps him to a table. Before killing him, Dexter poses some religious questions to his victim after noticing a tattoo of Jesus on his chest, ultimately giving him the drive to put Harrison into the catholic school.

As I said before, “Those Kinds of Things” was a very good piece of television. The show has completely avoided getting stale after six years by progressing its core characters and with this year in particular, is introducing more new ones than ever. Mos Def has still yet to appear, but that probably won’t take too long and with so little revealed about the two main bad guys for the year, Dexter’s hunt is undoubtedly going to be one of the best yet.