By: Cristian Barros | Movie Features | July 11, 2014
A maverick is someone who is unorthodox, unconventional, and a nonconformist. This is the perfect word to describe filmmaker Richard Linklater. He has been creating movies for the past two decades that define the way we live. He has also managed to zigzag his way around conventional genres and avoid being pigeonholed to one style of filmmaking. In honor of his latest movie, Boyhood, his most ambitious and creative project to-date, which was shot over the course of 12 years, using the same actor growing from childhood into adolescence, we look back at the life and key films that define this maverick writer/director.  Linklater was born and raised in Houston, Texas, where he would go on to attend Sam Houston State University, dropping out to work on an off-shore oil rig in the Gulf of Mexico. He frequently read novels on the rig and, upon returning to land, developed a love of film through repeated visits to a repertory theater in Houston. At this point, Linklater realized he wanted to be a filmmaker. He used his savings to buy a Super-8 camera, a projector, and editing equipment, and moved to Austin, Texas. It was here, where Linklater founded the Austin Film Society in 1985 together with his frequent collaborator Lee Daniel. 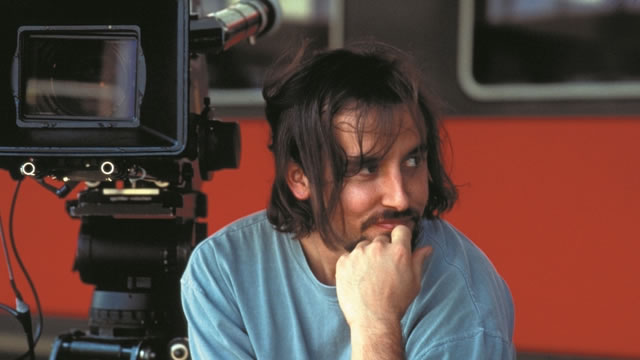 The 1990s was the birth of a new wave of independent cinema. Filmmakers like Quentin Tarantino, Kevin Smith, Steven Soderbergh, David O. Russel, and Paul Thomas Anderson were creating movies that were provocative and original in their style and storytelling. They were being made outside of the studio system and not adhering to tired formulas, which caused many to take notice. Linklater was an important and key component to this new wave of cinema. We start with the movie that put him on the map. 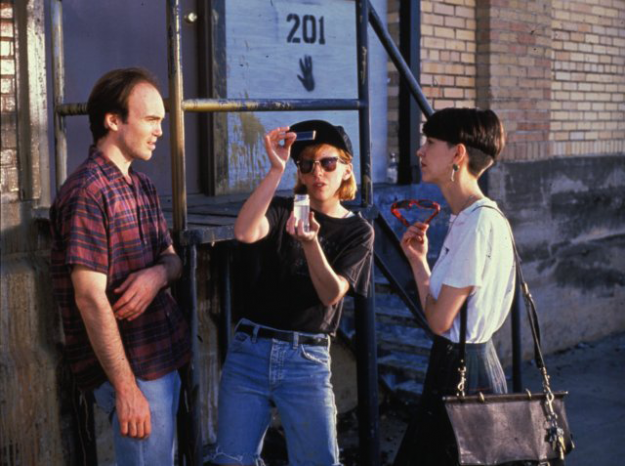 Shot on a minuscule budget of $23,ooo and on location in Austin, Texas, the movie is loosely structured and seemingly plotless, following a single day in the life of an ensemble of mostly under-40 bohemians and misfits in Austin. The movie is often taken as a starting point (along with Soderbergh's Sex, Lies, and Videotape) for the independent film movement of the 1990s because it's not plot-driven, like many studio movies of the time. It focuses more on a day in the life of people, rather than having a goal for the characters to achieve. Many of the independent filmmakers of that period credit the film with inspiring or opening doors for them, perhaps most famously Kevin Smith, who has said on numerous occasions that the film was the inspiration for his debut, Clerks. The movie remains relevant today because it's a time-capsule peek into Generation X, who the movie depicts as young adults more interested in quasi-intellectual diversions and socializing, rather than career advancement. It also displays a signature style of Linkater's in depicting events in real time and forgoing a traditional plot structure, where the focus is more on character and dialogue. The movie was critically acclaimed and made Linklater a talent to watch. 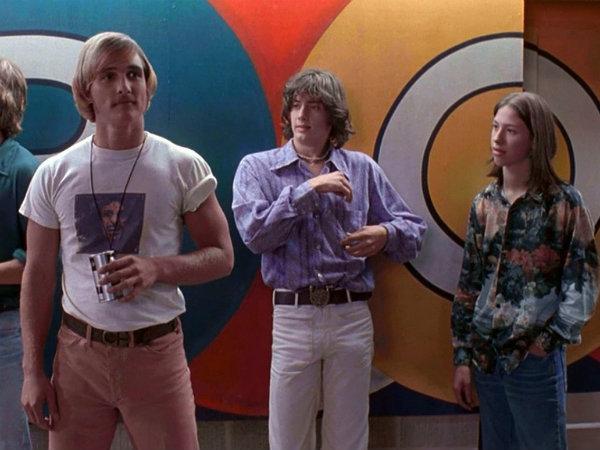 DAZED AND CONFUSED (1993) For his follow-up feature, Linklater decided to create a movie based on his years at Huntsville High School and the people he encountered there. The basic story is about the last day of high school on May 28, 1976 in the suburbs of Austin, Texas and follows different groups of teenagers wandering searching for amusement. It integrates Linklater's loose plot structure and takes place during a 24-hour period of time. The movie gained a cult following and brought Linklater more mainstream attention. It starred a cast of then up-and-comers like, Parker Posey, Ben Affleck, Joey Lauren Adams, Adam Goldberg, Milla Jovovich, Renée Zellweger, and most memorably, was the movie that introduced the world to Matthew McConaughey. The movie is viewed by many as one of the best and most accurate depictions of teenagers. This is due to the fact that many movies about teenagers coming out of Hollywood, during the early '90s, focused more on melodrama than on character. The movie shares its sensibilities with the classic 1973 movie American Graffiti, which was a depiction about a group of teenagers in the early '60s. That movie depicted an ensemble of characters navigating their lives after high school graduation and had more of a plot navigating the action. Linklater's movie is also an ensemble piece, but since it is not plot-driven and the characters never intertwine in the story, it makes for a unique storytelling approach in depicting teenagers, especially in the '70s. His style is more matter-of-fact, which is also similar to what George Lucas brought to American Graffiti, by presenting the lives of the characters in a non-sensationalistic manner. He was more concerned about the attitudes of the characters to their lives. He also viewed high school as a rather unremarkable time of events and the sole priority was hanging out with friends and searching for a good time. He also depicts the '70s as a time when life moved slower and attitudes were laid-back in terms of alcohol, drugs, and sex. Linklater, by showing the audience a pinpoint view of time, presented a world where people were not stuck about their past or future, but living very much in the present. Alright, alright, alright! 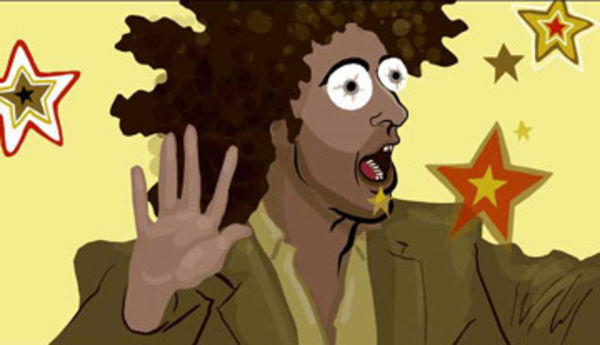 WAKING LIFE (2001) By the time this movie came out, Linklater had already created a reputation as a creative risk-taker, with additional movies like Before Sunrise (which we will dive into further below), subUrbia, and The Newton Boys (his first foray into mainstream movies), displaying his skills with different genres. One of his most creative risks came with this innovative project about a young man who wanders through a variety of dream-like realities, wherein he encounters numerous individuals who willingly engage in insightful philosophical discussions. Once again, Linklater was using a free-flowing approach to the narrative and focusing more on the dialogue. What makes the movie special was that it was animated, but not in the traditional sense. He used a technique called rotoscoping, where the movie was shot using digital video of live actors, with a team of artists drawing stylized lines and colors over each frame with computers, rather than being filmed and traced onto cells on a light box. The film contained several parallels to Slacker, which shared its loose nature. Ethan Hawke and Julie Delpy reprised their characters from Before Sunrise, as a dream sequence. The unique approach to animation created a surreal-like quality to the movie, which was effective in displaying the random interactions of the characters. He was also able to put the viewer inside of a dream world, where conscious and unconscious meet. The movie was critically well-received and praised for its experimental approach to filmmaking. This uncommon technique was also successfully utilized in 2006's A Scanner Darkly, an adaptation of a Philip K. Dick novel.

After Waking Life, Linklater continued to jump back and forth between mainstream movies and indie features, such as Tape, School of Rock, Bad News Bears remake, Fast Food Nation, Me and Orson Welles, and Bernie. These movies display the range and daring spirit of his filmmaking, by playing with genre and storytelling conventions. The Before series demonstrated some of his most ambitious ventures. Each film took place nine years after the next and depicted the evolution of the romance between Jesse (Ethan Hawke) and Céline (Julie Delpy). It all originated with the first feature, where Jesse and Céline (in their 20s) met on a train and spent a day in Vienna, while falling in love and parting ways. The second feature picked up nine years later and Jesse is in Paris for a book signing. Céline finds Jesse (who are now both in their 30s) and the two play catch up, walking down the streets of the beautiful city in an afternoon, while also realizing their romantic connection has not faded with time. The third movie picks up nine years later, the two (now in their 40s) are a couple with two young daughters and a son from Jesse's previous relationship. They are in Greece on vacation and we spend the day with them. Their relationship has lost its spark and they are struggling to get it back. Linklater co-wrote the scripts, along with Hawke and Delpy, to create a rich tapestry of what love is in different stages of life. The audience watches the progression of this couple in all of its messy complications, yet we also see the unique connection in various forms. All three films went on to great critical acclaim, with the second and third feature garnering Oscar nominations for Best Adapted Screenplay. Many consider these movies to be some of the most honest and realistic portrayals of love because Linklater implemented his carefree plot structure, which allowed each installment to unfold in real time. His fly-on-the-wall approach invited the audience to see love in all of its contradictions, which is beautifully conveyed in the performances of Hawke and Delpy and in the honest writing they share with Linklater. This was an uncommon approach to a romantic story in 1995, when the first feature was released. The audience got an intimacy with the characters that is all too rare in movies today. The movies were filmed every nine years since the previous installment, which was innovative because there has never been a romantic movie that has spanned this much time, with the same characters. The movies created a unique window into how the characters were changing or remaining the same over the topic of love. These films are some of the best love stories ever put on film because they act as a journal of what love truly is in different stages of life and how it can get muddled through circumstances. I would gladly welcome to learn where Céline and Jesse are in another nine years.

The Before series act as a precursor to Linklater's latest movie, Boyhood. As opposed to filming the Before series every nine years with the same actors, the latest project was shot over the last 12 years, with the same actors, all growing up on film. So many things could have made the project impossible, the actors wanting to give up or many factors of life interfering, but Linklater was able to pull it off, which is an impressive feat. Linklater has proven himself quite the maverick for the last two decades, by pushing the realms of storytelling and filmmaking techniques to reflect the human condition, in all of its complicated glory. No matter where Linklater goes next, it will be something unexpected and daring. He will always display the independent spirit, which makes the work he produces something vital and important to our collective way of life.