The Disappearance Of Eleanor Rigby: Them Review

"A love story where perspective is everything"
By: Cristian Barros | Movie Reviews | September 30, 2014
A broken heart is a difficult thing to mend, which is a sentiment shared in the new movie The Disappearance of Eleanor Rigby: Them. The Them in the title refers to the couple at the center of the story. It is part of the ambitious idea created by first-time writer/director Ned Benson, where this is the first of three movies about a relationship, told from three different perspective (the individual movies Him and Her will be released on October 10th). This incarnation combines the male and female versions to tell the story from the couple's point-of-view. In the movie, the luminous Jessica Chastain plays Eleanor Rigby, a psychology grad student who falls in love with Connor (James McAvoy), a restaurateur. We see their romantic bliss before being pushed forward to their unraveling of love. The story examines how each character is coping with the loss. We see them seek shelter and guidance from their respective parents, played by William Hurt and Isabelle Huppert (Eleanor's parents) and Ciaran Hinds (Connor's father). 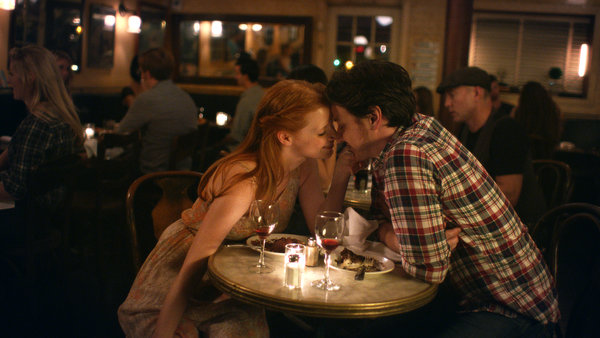 Benson has created something unique and audacious, but in this version he seems to have bitten more than he can chew. Since Them is an amalgamation of the individual perspectives, there are some story elements that are underdeveloped, which doesn't connect as emotionally as it should. That being said, there are enough moments that do connect in an honest and moving manner, which warrants the movie a recommendation. Benson has a sharp ear for dialogue that cuts through and resonates, especially in the scenes between Chastain and Viola Davis, as a college professor that Eleanor befriends. The limited scenes he presents of Chastain and McAvoy interacting are charged with a touching gravity, thanks to what the actors bring to their roles.

The performances are the elements that burn brightest throughout the movie. Benson is able to get memorable work from his cast. Starting with the wonderful and touching portrayals by Chastain and McAvoy. McAvoy excels as the lovesick and brokenhearted half of the couple. He brings to Connor a three dimensional element that allows his flaws to shine through as much as his romantic sensibilities. Chastain is best-in-show and is the one who lingers longest and haunts the movie with her heartfelt and raw performance. Chastain brings a lived-in quality to every nuance Eleanor is experiencing. Through her work, the audience is able to empathize with the pain of loss in a deeply felt manner. She is not always sympathetic, but Chastain makes her journey relatable and real. This ranks as one of her best performances. Benson also gets strong supporting work from Hurt, Huppert, Hinds, and Davis, who brings a forceful energy to every scene she is in. Her no-nonsense approach to the character jolts the movie anytime she is on-screen, proving why Davis is one of our best and most dynamic actors working today. 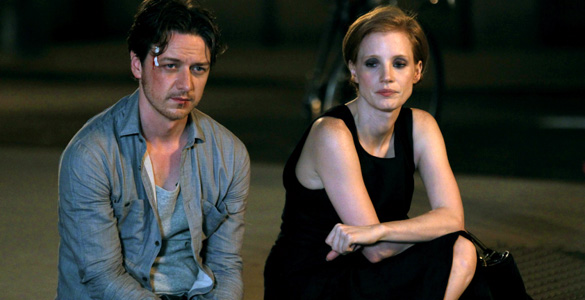 Despite some meandering in the pacing and narrative faults, which keeps the movie from being great, we still end up with a movie that touches upon themes of love and loss in a manner that is not usually explored in mainstream cinema. I admire Benson's ambitions of telling the story in a fresh approach. Despite him not fully achieving his vision, it's creative risk-taking not often seen, especially from a first-time writer/director. I look forward to exploring what he has in store next. I also anticipate the individual movies, which should expand upon the elements that are merely introduced in this version.

Chastain's work will stay with you long after the credits. She is an actress you want to follow wherever she goes. She makes Eleanor into a full-fledged character, warts and all, that you want to disappear with.