The Dark Knight Trilogy is getting re-released with the ‘Ultimate Collector’s Edition’ on Blu-ray. As well as contenting three excellent movies this box-set has 90 minutes worth of features and physical goodies like a 48 page photo book and a letter from Christopher Nolan. 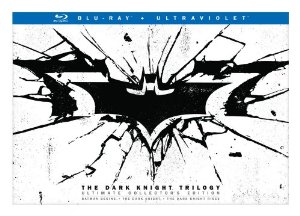 The Dark Knight Trilogy is one of the best and most loved movie trilogy of all time, let alone best superhero trilogy. The Dark Knight Trilogy is noted for being the movie series that has elevated the superhero genre, brought in a gritty and more realistic approach for many action franchises and made Christopher Nolan into one of the most popular directors in the world. Now the series is being re-released onto Blu-ray as Batman has to take on The Scarecrow, Ra’s al Ghul, The Joker and Bane.

DVD Special Features: Exclusive "Villain" prints from Mondo; Reproductions of the Tumbler, Bat-Pod, and Bat vehicles from the films; Large 48-page photo book of the trilogy with rare images; Over 90 minutes of new special features; A letter from Director Christopher Nolan


A number of major movies are being released onto DVD and Blu-ray this week, including the superhero hit Iron Man 3 and Jason Statham's Redemption. The Criterion Collection are re-releasing a box-set. Iron Man 3 is Marvel Studios first skirmish into Phase Two and sees new blood taking over the Iron Man series, Shane Black (Kiss Kiss, Bang Bang). Set after the events of The Avengers Tony Stark (Robert Downey Jr.) is suffering from post-traumatic stress disorder and a terrorist known as The Mandarin (Sir Ben Kingsley) is attacking American interests the world over. When The Mandarin attacks Tony Stark’s home Tony is left with only a damaged Iron Man suit and his ingenuity as he investigates a conspiracy involving a man from his past. Jason Statham is known as an action star, but in Steven Knight’s (Eastern Promises) directional debut, Redemption. Statham stars as Joey Jones, an AWOL Special Forces soldier who lives as an alcoholic homeless man on the streets of Convert Garden, London. When he is separated from his only friend, Isabel (Victoria Bewick) Joey stumbles onto an abandoned apartment and sets out to rebuild his life. Over the course of a year Joey sets out to find Isabel, work for Chinese gangsters, make amends for abandoning his daughter and starts a relationship with a Polish nun, Cristina (Agata Buzek).

V/H/S/2 is the sequel to last year’s anthology horror movie V/H/S. This sequel follows two private investigators searching for a missing student break into an abandoned house and a collection of mysterious VHS tapes where they examine the horrific content.

Many top directors have directed sections for V/H/S/2 such as Eduardo Sánchez (The Blair Witch Project), Gareth Huw Evans (The Raid: Redemption) and Jason Eisener (Hobo With a Shotgun). The Kings of Summer (DVD and Blu-ray)

Premiering at the 2013 Sundance Film Festival The Kings of Summer is a coming-of-age story about three teenage friends, Joe (Nick Robinson), Patrick (Gabriel Basso) and Biaggio (Moisés Arias) decide to spend the summer together by building a house in the woods and live off the land. But their ambitious scheme for independence put their own friendship to the test. Director Paul Andrew Williams is known for making very dark movies in the UK with movies like London to Brighton and Cherry Tree Lane on his filmography. But with Unfinished Song (or Song for Marion in the UK) sees Williams take a lighter approach as we follow Arthur (Terence Stamp), a grumpy senior citizen who reluctantly joins a senior choir group for his sick wife, Marion (Vanessa Redgrave) as he struggles with his relationship with his son (Christopher Eccleston, Doctor Who). DVD Special Features: New digital film restorations of the English- and Italian-language versions of Stromboli and Europe ’51 and the English-language version of Journey to Italy; Archival television introductions by director Roberto Rossellini to all three films; Audio commentary for Journey to Italy featuring scholar Laura Mulvey; Rossellini Through His Own Eyes, a 1992 documentary on the filmmaker’s approach to cinema, featuring archival interviews with Rossellini and actor Ingrid Bergman; New visual essays about Rossellini by scholars Tag Gallagher and James Quandt; Rossellini Under the Volcano, a 1998 documentary that returns to the island of Stromboli fifty years after the making of Stromboli; New interview with critic Adriano Aprà about each of the films; New interview with Fiorella Mariani, Rossellini’s niece, featuring home movies shot by Bergman; New interview with film historian Elena Degrada about the different versions of Europe ’51; New interviews with Isabella Rossellini and Ingrid Rossellini, daughters of Roberto Rossellini and Bergman; Ingrid Bergman Remembered, a 1996 documentary on the actor’s life, narrated by her daughter Pia Lindstrom The Big Combo is a film noir crime drama about Police Lieutenant Leonard Diamond (Cornel Wilde) who is ordered to stop an investigation into a leading gangster, Mr. Brown (Richard Conte), because he does not have enough evidence. But Diamond makes one last attempt to bring Mr. Brown down by going undercover and going for his girlfriend.