In 2001, Capcom released Devil May Cry for the PS2. It was developed by Team Little Devils and was originally supposed to be a Resident Evil title but was later changed due to the game being too farfetched from the horror game's roots in it's design. The game is often cited and sourced as the origin of the "extreme combat" genre which has a hero battling groups of enemies in stylized combat. It's sheer influence on the gaming industry is unquestionable and some of the games in the series go down as some of the best in the genre. Two years after, a new team and director took on the reins to make it's sequel Devil May Cry 2 which is regarded as the lowpoint of the series featuring none of the heart from the original. Another two years later the same team fixed and improved every aspect of the series up until that point whilst adding series staples into the mix by releasing Devil May Cry 3: Dante's Awakening which is the prequel to the series. We didn't see Dante for another three years, but it wasn't Dante we were playing as in the next iteration of the stylish franchise, it was Nero. Devil May Cry 4 was released to favorable reviews, but fell short of it's fantastic predecessor.

Now we arrive five years later as Ninja Theory takes the mantle and releases Devil May Cry, DmC for short, which is touted as a reboot of the franchise. When announced fans outraged about the redesigned Dante, it didn't feature an inkling of his former self's appearance. Fans have been bashing it and still are today. But much like The Legend of Zelda: Wind Waker, DmC manages to not only put fans' cries and outrages in their place, but also manages to surpass expectations. DmC is absolutely phenomenal and I'll tell you why. 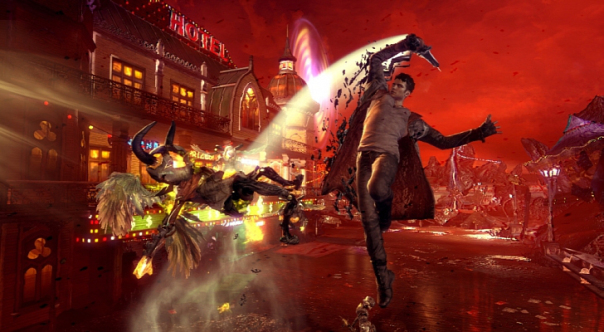 Right out of the gate DmC manages to draw you into it's stylistic, gothic, neon atmosphere in the game's opening which consists of Dante going to a strip club, taking some of the girls into his car, going home and... well you get the idea. Ninja Theory is known for crafting vibrant and captivating worlds to explore, but never this bizarre or to this extreme. Ninja Theory's game is centered around "Limbo" which is the game world's demon dimension of Earth that reveals the humans' true motives and demons' true colors. As you traverse the world, it breaks around you and you have to make your way around utilizing tools the game provides you with such as two "hookshot" items and a glide ability to use in tandem to traverse the unsteady world of shifting plates. It is an awesome concept that is prevalent throughout the entire game, but it manages to stay fresh because the developers always give the player a new item to play with in the world, or a new mechanic to use and master that helps you progress. One segment in particular near the end of the game is a highlight (Think the two hookshots and glide abilities combined with the "Quicksilver" technique from DMC3 in a high speed car chase).

DmC's story is by far the best in the series. The voice-acting and cut-scene animation is stellar. Kat is the best female character in the entire series. She is useful, reliable, understanding and likeable. The biggest controversy surrounding this piece of entertainment is Dante himself who's personality from past games has been energized in this iteration. His new design is more than fine and suits the world that Ninja Theory has crafted, though the "union jack" on his jacket still doesn't make alot of sense. I liked his new voice-actor because he tries to breathe life into the cardboard cutout cliche that Dante always has been. He is given an arc in this iteration which allows fans of the series see Dante grow and evolve throughout the entirety of the game. He begins the journey with the juvenile "not giving a s***" attitude, but later learns to grow up and accept who he is and what he must do. This transformation, however, wouldn't have been possible without his brother Virgil, another character who has received a makeover. Vergil is also given an arc, but it is the interaction between him and his brother that is really stellar, whether they are consulting their past lives or trying to one up eachother with dick measuring jokes. Vergil also becomes an actual character in this iteration and it's a treat to see him outside of the stoic ninja-samurai badass from before (Though he wasn't nearly as badass as he should have been in this outing). He loves Dante as a brother and that really comes through and the side characters although brief, are memorable. The DMC franchise has never been known for a great cast of characters, but mainly for it's recurring ones. In this iteration, Dante and Vergil take the spotlight and their relationship and moments are the best in the series (Though the last fight in DMC3 has yet to be trumped).

Aesthetically speaking DmC looks amazing. The environment diversity and its overall charm is the game's greatest strength. It quickly becomes apparent on your playthrough that the game is very unpredictable in its visual design taking you to a "Tron" like world to a game-show world with an announcer to accompany you.  Nothing feels out of place however in this bizarre world because Ninja Theory makes the game's identity known early in the game, yet it still manages to play with the player's expectations. The levels are sweeping both in style and scope and feature secrets hidden around every corner that is very reminiscient of the originals. Character and monster animations are superb, featuring fluidity during combos and fatigued motions after a long combo string. Some minor texture popping is present during the beginning of some cutscenes and occasional framerate hitches happen throughout when the action reaches a level of "too much" on the PS3 version. Sound cuts off during some loading screens and I experienced a loading screen in the middle of a cutscene. It stopped the cutscene from playing so I didn't miss anything, nevertheless it was distracting. The game's music features hard rock during the battling and sorrowful tones during the dramatic moments of the story.

Gameplay is an action game's sheen and this game burns bright. If you're a veteran of the franchise then you will feel right at home. Triangle is mapped to your sword, square to your guns, and, unlike the originals, dodging is more of an extension of your thought rather than an unecessarily long three button process. There is no target-locking which may put off some individuals, but it is for the better and allows DmC to seep into the current generation of action games. Fighting the camera whilst attempting to target "Agni and Rudra" was a huge pain in the ass and unecessarily so. It is much more intuitive to have a camera that adapts to the player's movement surrounding the boss than one that doesn't even allow the player to move the camera in the direction they desire.

The game's combat flows better than it's previous entries (This doesn't mean it's better). The game's design also accommodates the use of Dante's secondary weaponry. Color-coded enemies force you to utilize and learn the movesets of his weaponry outside of his sword, "Rebellion." The new weapons also serve other purposes of breaking secret doors or for destroying certain objects to allow the player to progress. You can swap to all of your weapons on the fly, so there is no reason for micromanaging your weaponry to suit the problem at hand. This doesn't mean that one weapon won't be better suited for the job, but it allows the player to experiment with the equipment he has outside of the preferred ones. Featuring a number of learnable and upgradeable moves for each of the weapons, there are a number of ways to customize your playstyle, though I will say that by the end of the game you will have had most of them bought anyway because you don't have to worry about "red orbs" being used for the shop and moves. Instead you have "upgrade points" earned through combat performance that you spend on combat maneuvers.

Despite many action games overshadowing the DMC franchise in terms of popularity i.e. God of War, none of them feature the same charm or style that<em >DmC manages to retain from the first iteration in 2001 to this point. It shows just how much enjoyment and heart developers can have in creating an angelic and demonic world that doesn't take itself seriously, but manages to be evocative of more "serious" emotions about the character's themselves despite how blandly written they are. It is a balance that the franchise has perfected and allows it to stand tall amonst the giants of the franchise with it's stylized, niche combat, neon, gothic atmosphere, and lighthearted attitude. These are the areas where DmC soars and whether or not fans that are blinded by nostalgia of DMC3 will agree with me or not doesn't mean a damn thing because in many ways DmC is superior. While I agree that the boss battles were a letdown and their weaknesses were all very similar they are still enjoyable at the very least and the boss battle with the news anchor is fantastic. Featuring a thematically brilliant demon infested tower battle through its many corridors and the small, intimate moments between Vergil and Dante, this game has some truly outstanding moments and some of my favorite of the series.  With another seperate story that is featured as DLC on the horizon in the form of "Vergil's Downfall" and "Bloody Palace" which becomes available after completing the game that pits you against over 100 levels of demons and the like to compete with others for a high score, and the replayability the game incentivises for the player to perform better on higher difficulties, combine to give the game a strong amount of value depending upon how much you love achievements.

DmC is a game I went into expecting a strong entry in the series, for I am a fan of Ninja Theory, and came out in love. It is my favorite of the franchise simply because, if anything, it breathed life and character development into a franchise that not necessarily needed it, but deserved it. Any developer that achieves this has my utmost respect.