Do Androids Dream of Electrical Sheep: Dust to Dust #1

San Francisco is a city that sits as a ghost town. Empty and desolate, everyone has moved either to the stars or has taken their chances with the “dust”. The ones that remain just try to survive. One of those survivors is Charlie Victor, an agent for the Institute of Special Trade Skills of America. His mission is to hunt down a series of runaway androids or C-VS created by the Grozzi Corporation. The man that he has enlisted to aid him is Malcolm Reed. Malcolm has a talent that he's been trying to hide. Ever since the exposure to the dust, Malcolm has obtained the ability to see people’s emotions and feelings, an empathic sense.

As the dust spreads throughout the state, a Stanford biologist, Samantha Wu spends her time researching animals. The effects of dust on animals is killing them, but no one knows why. Enter Talus, the very same C-VS that Victor is after. He carries a vendetta against organics and is fully aware that Grozzi has sent one of his own to bring him down. 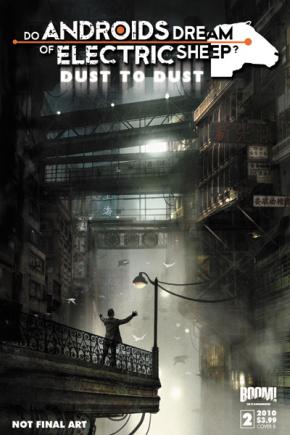 Chris Roberson (Fables) shows from the beginning that he understands and respects the source material from which this book stems from: Electric Sheep. The result is that it takes only a few panels of dialog to be sucked into the world. The pacing moves along and stays at a nice crisp pace. Robert Adler (Break-off) does an outstanding job in capturing the tired and used look that embodies the city. There are a few panels that the characters look a bit stiff but with that aside, the art work compliments the story nicely. Adler has this great ability that ALL comic artists need to exhibit: If all of the dialog was removed, the story could still be visually told. The coloring for the art by Andres Lozano and Javier Suppa, works with the penciling rather than fighting against it.

Phillip K. Dick has left behind a Sci-Fi utopia that has been picked over and dug through time and time again. It's truly refreshing to come across something that embodies the feel and spirit of that world. There is something gritty, bleak, and poetic about Dust to Dust number one. So far it has accomplished the first big step in comic books, a compelling first issue.