This is the book that Whedon addicts have been waiting for. If there’s one thing the world should know, it’s that you don’t cancel a Joss Whedon show without regretting it when it becomes a hit comic book. The popularity of the Buffy comic continuing the TV season feel of the show has brought in readers that would not ordinarily have read comics, but wanted their TV fix, to the world of comics. The latest edition to try this out is two season flop Dollhouse. Granted flop might be a bit harsh and yes Fox the king of cancelling had a lot to do with that. Regardless, it’s cancelled and now in comic form with Jed Whedon at the helm.

I’ll tell you right now that I was not a Dollhouse fan, I tried to watch the first episode and couldn’t finish it. Not my cup of Sci-Fi, but the comic had me interested since I knew more than likely it would be able to do things the shows budget would never allow and sure enough it did. We open with the mind wiping tech going viral over the telephone lines and infecting a telemarketer center. As the workers answer their phone their evert into savage beasts that begin attacking… well everything. Everyone is mindless except for one man who begins talking about directives and starts ripping his computer apart to build something, as he finishes the device he uses the now portable mind wiper on a fellow unaffected worker. 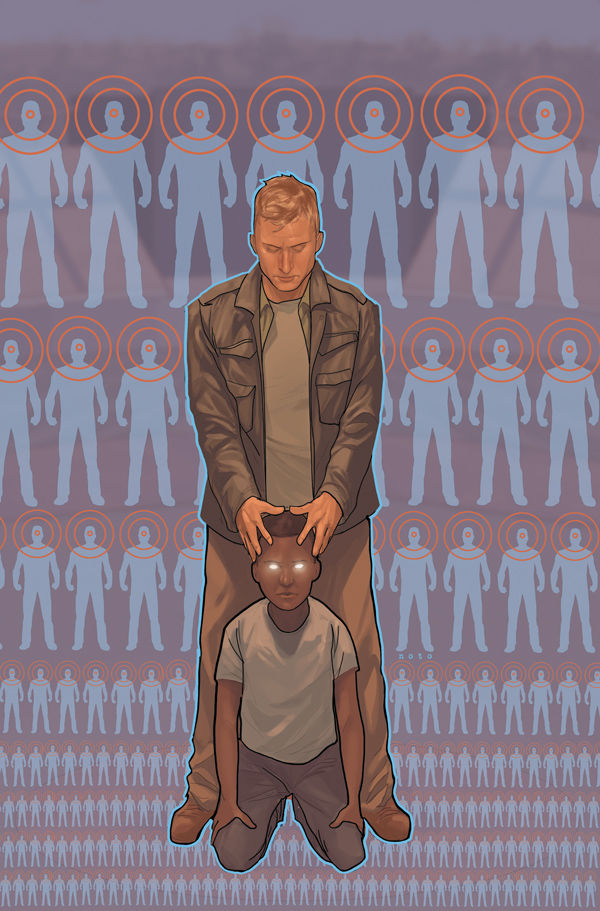 Alpha, a doll with multiple personality disorder is working out of a semi-truck parked in Dodgers stadium (hello endless budget). He’s working with Ivy, eh, Ivy’s on creating an army to fight the brain dead zombie-esc creatures. The first recruit is a young boy named Trevor. Alpha makes a rig on the side of his head that allows him to upload skills and information without over-writing his personality. Think of it like Fate of the Blade, Johnny Mnemonic and The Matrix all rolled into one. After a third Ivy shows up, the group decides to head to D.C. and find Echo.

At first this book didn’t really strike me, I still had that bad taste in my mouth from the TV show, but after letting the book sink in I actually enjoyed it. I liked a lot of elements that the world has and find the challenge of the storytelling interesting enough to come back for more. Writer Andrew Chambliss is faced with the challenge of making three Ivy’s in three different bodies all act and talk the same. Sure there are times when they literally say the same thing, but it’s their actions that make them the same person and Chambliss makes the reader believe that there are in fact three of the same person.

The art is decent, it didn’t blow me away but Cliff Richards gives solid work. Richards biggest strength is that he makes the world look and feel real. The biggest mistake that comic book artist make is their backgrounds. You can draw the main characters with as much detail as you want, but if the background is void of life the book will fall flat. Richards has something going on in the background 90% of the time in this issue and that really makes it visually interesting.

Fans of the show should just pick up the book; in fact they’ll probably skip the reviews and just purchase the comic any ways. But comic readers like me that didn’t watch the show, but are always interested in new comics should give this book a try. It may not grab you initially, but after going back to it and flipping through it again it actually got its hooks into me. If you need a break from the summer cross over madness happening from practically every company this summer than give this issue a shot.