I started up Dragon Age 2 with a lot of excitement, considering I was a fan of the original. The plot of the first Dragon Age was unique, although simplistic at times, but the gameplay, character advancement and interesting NPCs brought it all together to make a pretty good game. I was hoping that Dragon Age 2 would take that game, improve on places where it was weak (few), wow us with exciting set pieces and present a gripping story that kept us on the edge of our seat. Instead, what we get is a complete reimagining of the series, with the gameplay radically changed for the worse, graphics that seem almost equal to the original and a story that is incredibly mediocre with some small jumps in interest that make you wish they had stopped when they were ahead with Awakenings. 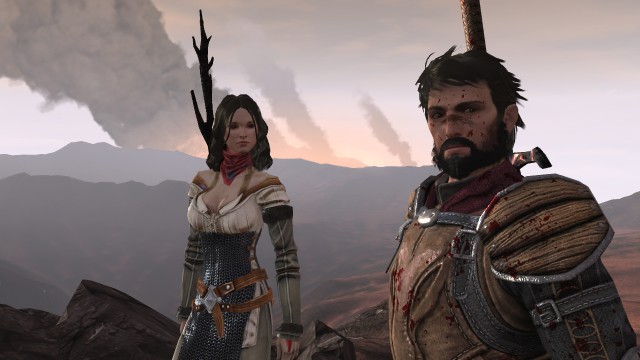 Dragon Age 2 follows the story of Hawke, a refugee from the doomed village of Lothering, which was in DA: Origins. Of course, we don’t see Lothering or the destruction that it suffered; rather, we see non-descript mountains for miles as we rush down a corridor fighting identical enemies and dispatching them with ease. Eventually, one of your siblings manages to get themselves killed for no reason (depending on your class), and while your mother is somewhat shocked, your character wants to get on with the action and not waste time with emotional scenes.

On we go to a cutscene in which we arrive at Kirkwall, a fairly bland city that has an affectation for blocky construction and a limited color palette of beige and more beige with the occasional red banner. Considering that the game revolves around the exact same four tiny areas of city, Kirkwall gets old fast. However, as you progress and decide the kind of work you want to get into (mercenary or smuggler, but it really has no effect on the story despite you committing to it for a year), you accumulate missions from a job board that allow you to make short jaunts out into the nearby mountains to explore some dungeons. This is the true injustice of the game. There are a total of THREE main dungeons that are perpetually recycled with the enemy of the day, with a smattering of smaller 3-4 room dungeons that serve as filler when you aren’t enjoying the main dungeon scenery over and over, although even those small dungeons are limited in number (3-5). Each dungeon is a linear route with no deviation from central hallways, with a predictable group of monsters in each clearly marked room on the path. Sometimes there is a quick exit once this highway of gibbed enemies is complete, but most times you have to backtrack to leave. I don’t know if this means I’m lazy or the developer is. 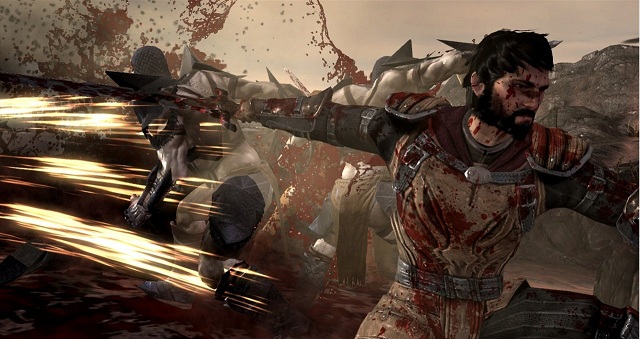 Eventually, you make enough cash to fund a mission to the dwarven Deep Roads to find some more money, which you do. This cash allows you to skip the next three years of Hawke’s life and become a playboy with a mansion. Now that through sheer chance you became a big shot, it turns out the Qunari want some random relic a party member of yours (Isabella) stole or they’ll take over the city. It falls to the player to choose to massacre the Qunari for their impertinence, or give up Isabella and the relic to placate their wishes. Either action makes you the official Champion of Kirkwall as well as bestowing a free time skip over the next three years. 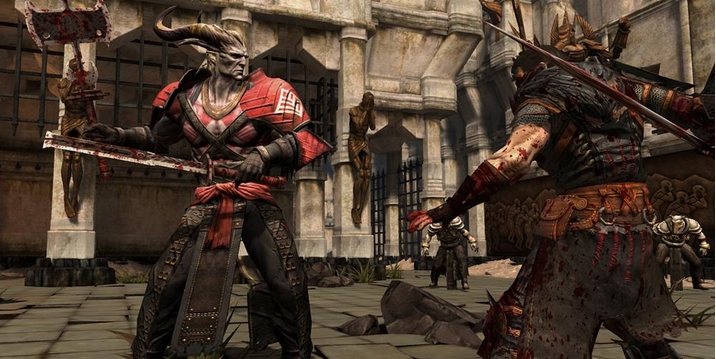 Now that you are a god among men, mages are getting antsy with their enforced confinement (due to nearly 95% of free mages in Kirkwall are insane blood mage abominations-in-waiting) and the Chantry are getting itchy trigger fingers and it falls to the player to resolve the problem. Unfortunately, the problem erupts due to Anders’ involvement and the player must take sides, ending the game in a slaughter of all parties or just the mages. At this point, based on news releases, I believed that the Champion of Kirkwall may venture out of this prison they call a city and maybe influence more folks than just the locals with the arrogance of the position. Unfortunately, this was not to be, as the game ends rather abruptly with an epilogue that remains more or less static no matter what choices you made throughout the game. I made Merrill my common-law wife, but the epilogue merely stacks the audio of all the possible choices on top of each other when it mentions your spouse, if you had one.

Strangely enough, character interaction is one of the biggest problems that arise in Dragon Age 2: your character is wooden as the mage staff he/she sometimes carries. The male voice actor is dull and uninspiring (sounds like Anders) no matter what choices you make, and never does he get emotionally tangled in a way that feels natural. The female actor is a bit better, especially if you play her like a dominatrix (hehe), but for some reason both actors have British accents unlike everyone else in the game, even your own siblings. Dialogue choices are limited and uninvolved; I guess that’s the problem with using the dialogue wheel from Mass Effect, as the player doesn’t have to consider the particular words that they can say but rather just presenting a vague emotion to request what amounts to the same thing. Should I make the critical choice to be stern, make a joke out of it or be nice, especially when the only real result is to impress or to piss off your teammates? 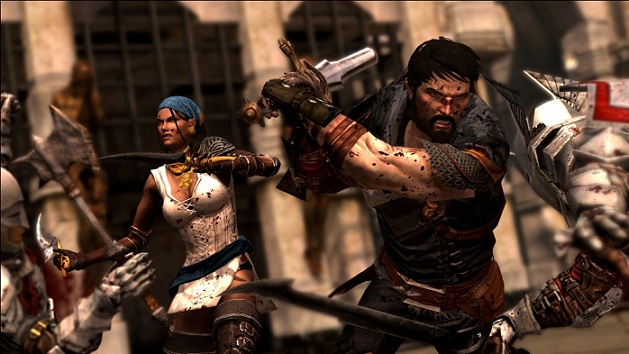 My god, your teammates! Never before (okay, maybe a few times) have I seen such one-dimensional characters that you must develop appreciation and even the urge to be randy for. They never change attitudes or demeanor (except if you want to persuade them that mages are okay or not) and are otherwise unlikable. Isabella is a skanky pirate who loves to tell your other teammates what a whore she is, Merrill is a blood mage elf who is uguu-kawaii but seeks to be a skank like Isabella, Varric is a slimy dwarf without a beard who is too friendly for his own good, Aveline is a Templar who seeks your help to bag another Templar under her command for sweet lovin’, Fenris is a formerly enslaved elf who despises mages (due to the fact that his former master was a mage), and lastly your warrior brother Carver and your mage sister Bethany round out the pack.

Each one (except your siblings) at some point expresses interest in your hot behind, regardless of gender, creating a situation that is more creepy than erotic. I’ve even heard stories of people not wishing to engage in hot dwarf homosex that do so by accident so as to not cause a possible drop in reputation. The fact that all of your teammates are bi-sexual, points to the one-dimensional nature of the characters. Other than their pre-set attitudes about story events, their lack of sexual preference indicates that the developers weren’t really interested in making deep characters but rather hollow archetypes. Compared to the story-driven characters that have a valid reason to join you on your quest as was the case in Origins, these tools join your squad for essentially no reason other than their desire to bask in your radiance. They stick around after time-skips with no visible change to their appearance or motivations, despite remaining idle for years waiting for your command. For such a major part of the game, your team members contribute next to nothing to the plot other than in one or two cutscenes. One other little fact: did I mention that you can only change Hawke's clothing throughout the game? You get many different clothing options, but are essentially limited to armor of your class, and none of your party can use any of it. Wasted opportunity for sure.

Better known characters from Awakening make cameos in missions, but are mostly there for scenery as they do not have a presence beyond a few battles. Depending on your playthrough, you may see all of your team members from Awakening or just a few. Anders makes a return to join your party, and seeks to protect mages from the Chantry due to his fusion with the spirit Justice, who has become corrupted through exposure to the physical world. 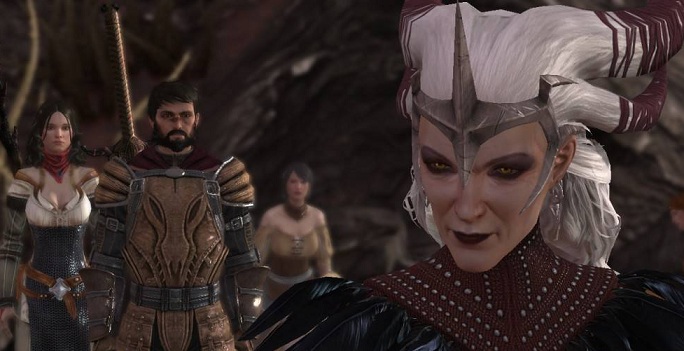 The combat system has become radically different, with action beat-em-up gameplay replacing the careful tactical gameplay of the original. While animations are smooth and dynamic, enemies burst into gibs with a slight tap of your sword, and the pace of the battle means that combat is over within a few seconds of it being joined. While different, the new system is not altogether terrible, as it does work well and without any error. However, it throws massive amounts of enemies at you in pretty much every battle, rendering combat a repetitive exercise as you cleave through the 20th wave of identical enemies. The combat is the most obvious evidence that Dragon Age 2 is a streamlined, casual console title that attempts to appeal to a different demographic than the one that was interested in the first game while disassociating itself from its core audience.

I wanted to enjoy Dragon Age 2, and I did, to a degree. However, it cannot be compared in good faith to the original and not notice that the overall quality has suffered, both in breadth of material and in the painful simplification of gameplay. It simply cannot be treated as a legitimate successor to the original; it is much more like a side-story of Origins, a far less important plot that evolves separate from the main story of the Grey Wardens and the Blight but still in the same world. There are examples of other games where the main game is of one style (i.e. the Final Fantasy series) and there are spinoffs that involve elements in an entirely new gameplay system (i.e. Dissidia). It is a fun game, but don’t expect the same experience you got with Origins. Dragon Age 2 was released March 8th, 2011, for Windows, OS X, PS3 and the Xbox 360. Give it a shot if you like action games or are a Dragon Age fanatic.