Despite a misleading advertising campaign, the original Dragon Age was a huge critical and commercial success. PC Gamers especially enjoyed it as it was a return to the style of old school Balder's Gate gameplay that Bioware was originally known for. The sequel comes out next month and looks to be dynamically different from the first game.  In anticipation of the game's release I played through the new demo not once, but twice.

From the looks of things Bioware have taken some ideas from Mass Effect 2 and transplanted them into Dragon Age. Gone is your silent protagonist The Warden, and in his place is a named hero by the name of Hawke. Hawke is destined to become The Champion of Kirkwall and it is up to you to shape the story of how that happens. In the demo, following a brief opening sequence I was able to choose the gender and class of Hawke, much like I customised Commander Shepherd in Mass Effect. 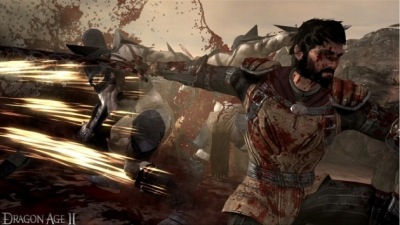 That isn't all that Bioware has changed however. The Interface has also been majorly streamlined and the talent/skill trees for the three playable classes have been completely overhauled. The Interface now allows you to easily spend your skill points upon levelling up. During the demo this new system was put into practice several times and I really like how Bioware have gotten rid of many of the passive skills on the skill tree and made it almost entirely made of activatable skills.

The original Dragon Age had this unfortunate problem where its graphic style was far too reminiscent of The Lord of The Rings movies. While Dragon Age 2's ambitious new art style did seem jarring at first but it does give the game a visual identity of its own and its relatively easy to adjust to the change. Its easy to see when you play the demo that Bioware is also trying to tell a new, more ambitious kind of story with Dragon Age 2. The plot of the game is going to span an entire decade, following Hawke's rise from a refugee to the Champion of Kirkwall. The story of the game is going to overlap somewhat with Dragon Age : Origins and that means we can expect to see some familiar faces from the first game return and in fact during the demo Hawke is saved by a certain Witch of the Wilds that Dragon Age fans may remember. 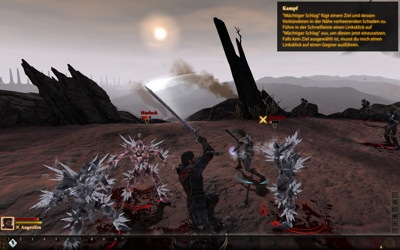 While the combat of the original Dragon Age was very tactical and rewarding it was also quite tedious and dull at times. From the looks of the demo, Bioware have solved most of these issues by making the combat far more visceral. Your combat animations are far more violent and stylish and as far as gore level goes, the the game is definitely going to top its predecessor. The new style of combat reminded me a lot of The Witcher, albeit with less clicking.

As part of overhauling the combat, Bioware have also overhauled the way that the different classes work. Each class is going to feel less like a set of abilities tapped onto a character model and more like a distinct style and way of playing the game. When I played a Warrior in the demo it felt very easy to jump in and rip Darkspawn to shreds wheras when I played a Mage It was all about using my powerful spells and high damage to help the AIs in my party.

As you would expect, Bioware is pretty heavy on the drama and the choices in Dragon Age 2. In the demo Hawke and his family are fleeing from the darkspawn and the demo includes several choices but no matter how things play out, one member of your family will always die. For me Hawke's Sister died one time and the other time his brother died. Its a small thing but these small events build up over the course of the game to make you feel much more attatched to the characters and the situation they are in.

After this sequence, the demo took us to a later point in the game and introduced us to new party members by the names of Isabella and Varric. Hawke had to help Isabella survive an ambush and then confront the man behind it. This section of the demo took place in the city of Kirkwall and it felt much more open than the city of Denerim in the original Dragon Age.

Initially the drastic changes that Bioware were making to Dragon Age 2 started to alarm some fans who feared that Bioware were ruining what made Dragon Age great. Thankfully these fears seem to be unfounded as it is set to keep the elements of Dragon Age that made it great and completely overhaul everything that was lacking in it.