"This newest installment in the Dragon Age series is one of Bioware's most expansive games yet"
By: Euan Dewar | PC Reviews - PS3 Reviews - PS4 Reviews - Xbox 360 Reviews - Xbox One Reviews | December 5, 2014
Is there anything better in gaming than a big ol' massive RPG? I mean woof, eh? Elder Scrolls, Fallout, various MMOs, these are all worlds that we relish really losing ourselves in. Giving you that "Oh god, I started playing at 6pm and now it's 2am and I didn't even notice" feeling. Dragon Age: Inquisition is prime crack for fans of RPS opuses, combining that epic scale with Bioware's traditional knack for great characters and smart, enjoyable combat.
The setup for Inquisition fits neatly into what you'd expect from a Bioware game. After buggering about for far too long in a character creator you take control of someone entrusted with a great power against their will, a great power that is, of course, the only way to defeat this game's oncoming evil presence. From there you must gather allies, make meaningful decisions and put together a diverse party of characters in order to help you defeat your foe. It's a well-trodden formula, to be sure, but as with many things it's how the developers use it that helps it rise above it's triteness. 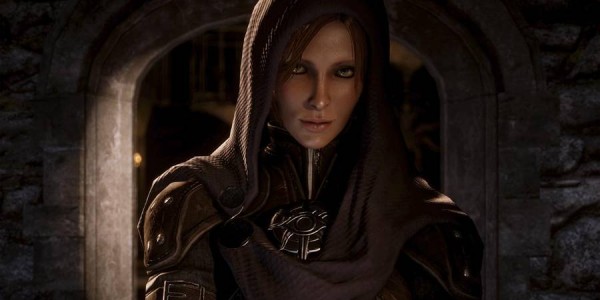 There's a real sense of building an army this time out. The titular 'Inquisition' that you are putting together has it's own (customizable) base of operations and a war room from which you can send out operatives on missions that advance in real-time and net you various resources when they're finished. A good hub that everyone lives out of is always important to these games, and Skyhold is up there with the best of them.
As you'd expect from Bioware, the characters you'll take with you on your adventures are pretty top notch. Cassandra and Varric are the two returning characters, and they're developed further in some satisfying ways. The rest are new though and aside from the incredibly grating British-elf character that is Sera, they're all great fun to boot. I'll give a particular shoutout to Iron Bull who never fails to make me laugh with the way he just loses his shit whenever you encounter a dragon, as well as Dorian who sports a fantastic mustache. Top-notch stuff. 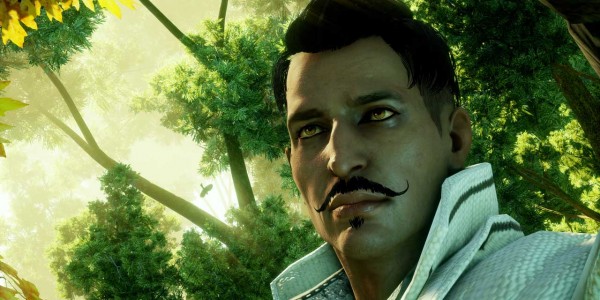 The main story quests in Inquisition make for a sizable adventure in of themselves but, as with any game of it's ilk, the real meat is to be found in everything around them. Most previous Bioware games have felt massive, but in reality were quite different from your average large-scale RPG. They fooled you into thinking they were bigger than they actually were by packing a lot of colorful details into lots of smaller areas. Inquisition takes this template unto its logical next level, laying out a selection of beautiful areas that'll take you ages to fully explore and seek out all their nooks and crannies. This is less Baldur's Gate and more Skyrim, in that regard.
Not every activity to be found within these boundaries is a barnstormer of course. There are plenty of "Go here and get this thing for me" quests to be found that don't exactly get the pulse racing. But thankfully enough there's a simple pleasure in just roaming these landscapes, whether they be a beautiful woodlands area or a bleak frosty canyon. You also have access to a horse this time out for easy traversal and, again, there's a cathartic pleasantness in just trotting around these levels, admiring their aesthetic value and occasionally stumbling upon a quest.
Another thing that helps keep this environments lively is Inquisition's stellar combat. Dragon Age: Origins harkened back to the tactical, pause-heavy battles of the old infinity engine RPGs, and expanded upon it in a lot of smart and modern ways. Dragon Age 2 however attracted a lot of criticism for what was seen as an unnecessary dumbing down of these systems into an action-RPG that required little thought. Inquisition on the other hand attempts to offer a little bit of something for everyone, changing the amount of effort you will expend in combat depending on how you choose to play it. 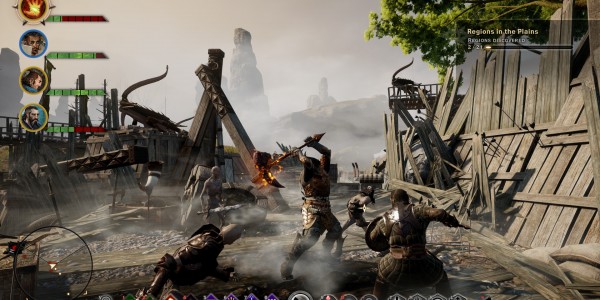 On normal difficulty you won't have to approach the game with much tactical thought. Here it plays out much more like the combat in a dungeon crawler, making very little use of the pause function and just generally going at enemies with a set of spells or abilities you feel accustomed to, stopping every now and then to chug a potion or two. Bump up the difficulty however and thing's become much more like Origins, requiring a real serious knowledge and micro-management of your characters abilities. Playing on Hard difficulty kept the skirmishes entertaining and challenging (in a fair way) for me right through the entirety of the game.
There's also a great deal of customizability to be found in how you setup your party. Of course there's all sorts of loot of various rarity to be found scattered around the place, but there's also a robust crafting system, allowing you to build weapons and armor from blueprints as well as build modifications that add different stats or effects when pared with a weapon.
For those who raised a worried eyebrow when Bioware announced Inquisition would have a multiplayer mode, don't fret. It isn't quite the surprise success that Mass Effect 3's multiplayer was, but it is a fair old bit of fun. It removes most of the complexity from the combat and has you trawling through dungeons with three of your buds, merrily savaging everything in your path. It feels distinctly more Diablo than it does Dragon Age, but get some mates together and you can definitely have a good time. There are micro-transactions, as there was in Mass Effect 3, but they're all optional and you never feel pushed to buy them. 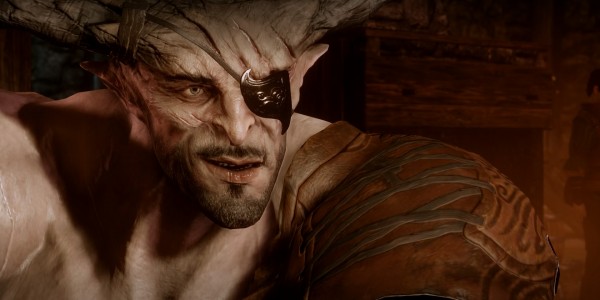 I spent time with Inquisition both on PC and Xbox One. I shouldn't have to tell you that the PC version is the standout, but the console version acquits itself well enough. Instead of the typical bottom of the screen ability-bar it has, again, a Diablo-esque menu to the side that serves the same purpose. It also includes the tactical pausing only found in the PC versions of previous entries in the series, which makes it a much more enticing proposition for those who can't pick up the PC version.
One thing common to all versions of the game though is bugs. I never personally encountered any issues that broke the game, but I encountered plenty of little strange annoyances. The most common of which was texture issues as well as the overall sound becoming incredibly muffled out of nowhere, it was easily fixed by pausing and un-pausing again but it was frustrating how often it happened. This did happen during cutscenes a couple of times though, which I was unable to fix.
However this lack of polish is nowhere near enough to ruin the rest of the experience. Not much of Dragon Age: Inquisition breaks new ground, but it does do damn near everything it attempts incredibly well. This is one of Bioware's most expansive and enthralling adventures yet and I have no doubt it could keep you hooked for hours on end like it did with me.
Rating
9.0
Pros