With Dragon Age 2 just around the corner, it’s important to review what we know about its predecessor, Dragon Age: Origins, itself a critically-acclaimed dark fantasy epic that followed the growth of the player’s character to save the land of Ferelden from an impending evil that threatened to overwhelm all life. Since its release, Dragon Age has seen a succession of downloadable content that added side-plots to the existing quest, as well as a full-fledged expansion that takes place after the invading darkspawn army had been broken and scattered. While it uses darkspawn as a generic evil force that has yet to be fully explained or described, the races that inhabit Ferelden and the surrounding lands have unique and lush lore that is often different from the more common tropes surrounding fantasy settings. 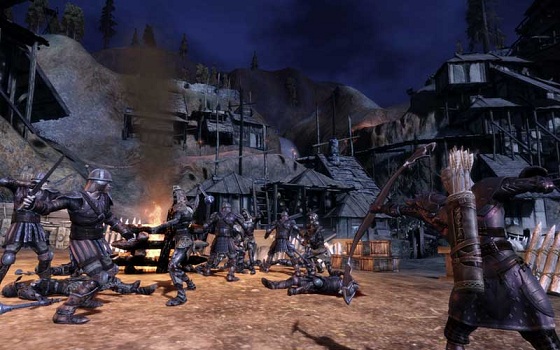 The overall story of Dragon Age: Origins follows the ascension of the Player Character Grey Warden who emerges from a variety of different “origin stories” that can change the plot and dialogue to a degree. With the initial choice between human, dwarf or elf, players can go on to choose a class and upbringing that, when taken together, alters the prologue accordingly. However, in each prologue, the player is recruited into the Grey Wardens, a specialized anti-darkspawn force, which is where all the origins converge on a central point and continue as a linear path. The player must travel across the land to each race’s bastion to recruit their assistance in the coming war, and at critical junctures the player can make decisions that impact later results (i.e. the player can recruit the elves by protecting them from werewolves, or recruit the werewolves by allowing them to massacre the elves. Both fun and profitable choices!)

A major difference between the two games is the fact that in Dragon Age 2 there is only one origin story and it forces the player to choose a human for their character, although full visual customization is available for both genders. The ability system is more efficient, with skill trees outlining the proper skills that are involved in each style of play, although the total number of abilities is reduced. One cool aspect is that, unlike DA: O, the Player is fully voice acted, allowing the story to become even more involving; the dialogue options are placed on a Mass Effect-style wheel, but each choice comes with an icon that identifies the attitude that comes with each (to better direct the flow of conversation.) 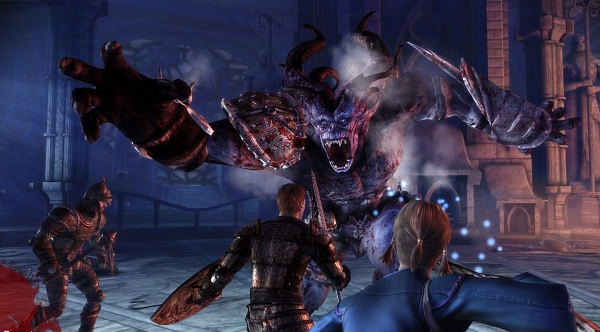 The gameplay in DA: O utilizes a system that echoes older Dungeons & Dragons style character growth and tactical gameplay, much like Baldur’s Gate or Neverwinter Nights. While it uses such a system, classes and abilities are more streamlined and more intuitive, with the admittedly (very) wide range of abilities and classes narrowed down to the more archetypal classes of warrior, rogue or mage. Each class then has the opportunity to specialize towards particular party roles by choosing appropriate abilities (both active and passive) to better accomplish their task. For example, a warrior can specialize in shields and absorption of damage to better protect the rest of the more squishy members of the party, or can focus on quick attacks akin to a better armored rogue, or be a beast that hefts a two-handed battlehammer around like it was nothing. A basic warrior can use equipment that supports these choices at any time, but only through specialization can one truly become proficient.

Dragon Age 2 attempts to streamline development and combat even further by essentially remaking the slower and methodical system of DA: O into a faster-paced brawl. The combat is quick and much more dynamic, with basic melee attacks forming combos and flashy moves that are more visually impressive than the stilted attacks of DA: O. Spells and abilities recharge quickly, and are displayed along a quick action bar along with a class-specific potion button that looms rather large in the bottom-right corner of the screen. The older interface of the original has been done away with and has been replaced by a more console-fied menu that provides only basic information at most. In DA: O and other D&D style games statistics often combine to make the character, with usually only one or two stats that are particularly relevant to a class. In DA2, this trend is stressed, with only two stats (class stat + constitution) mattering to each class with the others providing little to no benefit: for example, a warrior requires strength and constitution only. Strength provides everything the warrior needs, be it damage, accuracy, and a variety of resistances, while constitution provides hit points. It does make character development much simpler, but reflects the direction the game is going in, namely more of a console-centric title that encourages linearity. 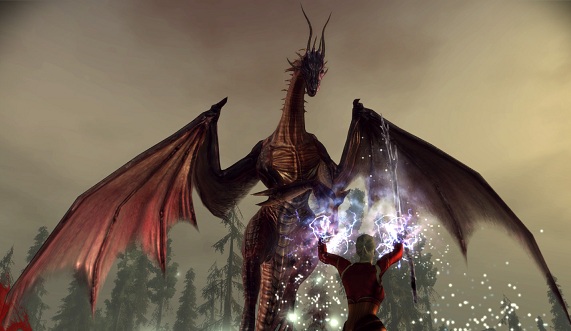 Dragon Age: Origins is an excellent example of the deep storytelling and interaction that Bioware is well known for in its RPGs. It may look a bit dated for its time, but it combines a wealth of content and customization that outstrips many competitors. The rich landscape is ripe for expansion, and has emerged as a popular setting with books and comics that detail the world with additional plots. With Dragon Age 2 set for release in the coming weeks, a look back reveals differences that may prove to be staggering for some fans. Much less a tactical RPG (as it was in DA: O), DA2 shows itself to be more of an action game with RPG elements: it comes across as very similar to another of Bioware’s titles, Jade Empire, in that respect. Nevertheless, Dragon Age 2 may still prove to be an equal of its predecessor in terms of overall experience. Dragon Age was released on Windows, Playstation 3 and the Xbox 360 in November of 2009, and Dragon Age 2 is set for release in time for March 2011.