“Felicia Day in Dragon Age blah blah blah blah”.  That’s what many people will see when they look at the cover of this DVD.  The cute redhead from The Guild?  In a live-action Dragon Age movie?  That’s enough to sell this DVD to plenty of consumers.  But what about all the other people who might enjoy this compilation of the swords & sorcery webseries?  Is there enough justification on the disk to warrant the purchase of something that can be seen on the internet for free?

This six-part series first hit the internet last October, timed to release along with Dragon Age 2 DLC Pack Mark of the Assassin.  In that DLC pack, Felicia Day provided her voice, and likeness to an in-game character named Tallis, and she also plays the same character in this live-action series too. It’s a unique concept for a game/ movie tie-in.  This sort of cross over is certainly something that should be further explored by the industry. 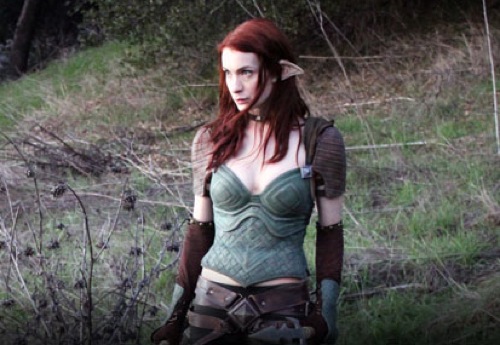 Redemption tells a story unrelated to the in-game events of Mark of the Assassin.  Viewers don’t need to have played the DLC pack to follow Redemption, which chronicles the quest of an Elvish assassin named Tallis (Played by Day).  Tallis is on a mission to recapture an escaped mage; in the world of Dragon Age, magic users are considered dangerous and any rogue mage is quickly hunted down.

Tallis isn’t the only one looking for this magic user, and she acquires a party of adventurers who each have their own reasons to pursue Tallis’s quarry.  With this mixture of Rogue, Mage, Knight and Warrior, the series does have an authentic feel of the Dragon Age setting, and the way that Tallis’ companions always have some sort of sub-plot going on rings true of the side-quests and NPC interactions of the game.  In fact the project’s strongest quality is the amount of respect for the source material.

While it is an authentic Dragon Age experience, that doesn’t necessarily make it a good movie.  A major problem is that Tallis is relentlessly sassy, perky and glib.  She’s perfectly confident that she’ll come out on top in every situation, and that’s what happens every step of the way in this story.  There’s never a doubt that she’s going to win, and the only time the bad guys get the upper hand is when one of her companions screws up. 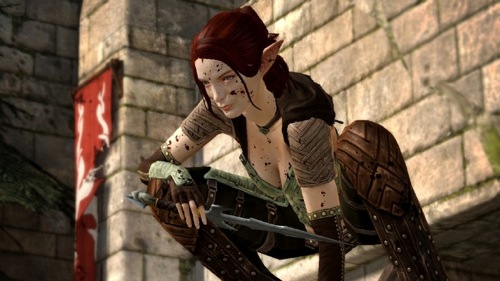 Tallis is the epitome of the Mary Sue, and it’s no coincidence that the actress who plays her also wrote the script and produced the film.  Fans of Felicia Day will probably love this aspect of Redemption, but other viewers are likely to find her character arc to be a little flat and predictable.

Aside from Day, the only other familiar face in the cast is Doug Jones as the mage that everyone is after.  Jones has a long resume as “The Guy In The Monster Suit”, including some stellar work like Pan’s Labyrinth, the lead Gentleman in the Buffy The Vampire Slayer episode “Hush”, and he recently appeared in The Guild with Day.  He does a great job as the villain here, once again under heavy make-up as a horned monster.

The make-up in general is excellent despite the low budget, and the various inhuman cast members ring true to their in-game counterparts.  Costumes are also very impressive for such a small production, the distinct art style from the Dragon Age games is recreated in everyone’s outfits, along with their weapons too.  The special effects also recreate some of the visual flourishes from the game, such as the spray of blood that appears during combat, as well the appearance of some of the magic spells cast by the mage characters.

On the DVD, the episodes are edited together, but there are awkward transitions between them, with abrupt cuts at the end.  Each chapter begins with text about the world of Dragon Age and while this is helpful for people who aren’t familiar with the game, it breaks the flow of story, and the transition isn’t as fluid as one would hope.  The project was obviously intended for episodic release on the internet, with a DVD compilation being an afterthought.

Redemption has a running time of just fifty minutes.  There are bonus features which run another 40 minutes, but even assuming that viewers watch every second of the bonus material, this barely makes it to feature length.  Many of these features are promotional footage from Bioware’s website and Dragon Age fans are likely to have already seen them.

The most noteworthy bonus feature is the commentary track with Felicia Day and Director Peter Winther.  In it, Day and Winther discuss the difficulties of writing and producing a project specifically as a low-budget web series.  Film-makers will no doubt enjoy these behind the scenes tales of injured actors, tight schedules and budget-conscious rewrites.  Dragon Age fans will probably like the sincere fandom that radiates from the two as they discuss the game.

Dragon Age Redemptions is a hard sell on DVD.  It’s something that can be watched in its entirety online, and was clearly produced for that medium.  Hardcore fans might want to hear about the production from the bonus features, but the only compelling reason to own this DVD is the commentary track.