Driver for the Dead #1 – Review

Louisiana is a place known for its vast culture and rich history. Thus making it a perfect location to tell any narrative, especially one involving the tried and true lore of Hoodoo (African folk magic). Add some demons, vampires and supernatural elements to said location and witness the blueprint for Radical's Driver for the Dead.

The Conner family has a problem, their son Billy, has been cursed from an ex-employee that practiced the art of Hoodoo. This is a type of West African black magic that came over on slave ships and acted as sorcery. It has been passed down through families over time. Fearful of their sickly condition and out of other options the Conners enlist the help of Mose Freeman. His occupation is simple... he's a “healer.” Mose begins his investigation on the Conner's hired help Clara. He goes on to explain the tricks and tactics that were used to punish their son Billy. Soon he prepares for an exorcism of Billy but that's where he gets more than he bargains for. The power of the demon infesting Billy fights the exorcism every step of the way. In the end it mortally wounds Mose. He uses his last breath to demand a call be placed to Alabaster Graves. 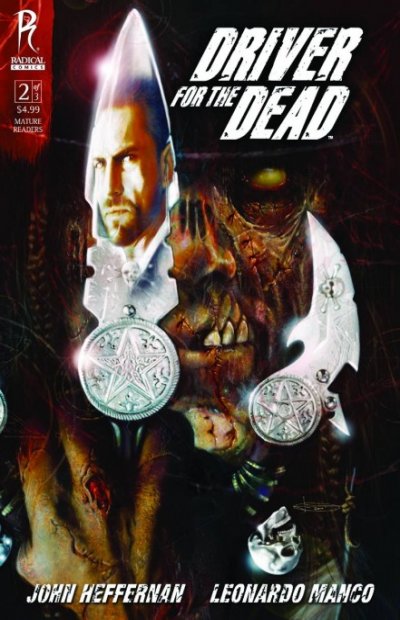 Driving his unmistakable hearse, Black Betty, Alabaster is fighting the clock to get his current cargo into the ground be for it changes into a vampire. Cargo like that makes Alabaster anything but the run-of-the-mill hearse driver. Alabaster deals in something a little more exotic than normal dead folk. This one just happens to be a Goth kid that had the misfortune of being vampire grub. Now infected, the kid kills himself, kind of, but is still slowly beginning to turn. So Alabaster has to get him in the ground before it's too late, despite running into some grave robbers that foil his proper burial of the vampire. Thus leaving him no other choice than to slay his cargo, Alabaster makes it back home in one piece to deal with his own problems.

Once back, Alabaster returns to his 9 to 5 at the Delacroix funeral home. He's then informed by his boss Felix that Mose Freeman has been killed. Mose's last wish was that Alabaster drives his remains to the Freeman's family crypt. The only catch this time is that Alabaster will have a living partner riding shotgun. One Marissa Freeman, Mose's great granddaughter. After a few moments hating the idea Alabaster is forced to agree.

To say that John Heffernan (co-writer-Snakes on a Plane) takes a few cues from a lot of different sources would be an understatement. But that's not entirely a bad thing in this supernatural adventure. The story's narrative feels like a collective of a classic grind house and horror films mixed in with a little bit of the Dresden Files and a touch of Criminal Macabre for good measure. But somehow everything works and all the while the story keeps a great and interesting pace. The first ten pages are worth the book's price alone. Leonardo Manco's (Doom Returns, Batman: Gotham Knights) pencils and panel presentation are absolutely awesome. It adds so much to the story that it would really be hard to imagine anyone else's art on this book.

Sometimes comic books try too hard to express a lot of range and emotion. Then things just somehow get drawn out, overdone and complicated. It feels as if companies are always attempting to achieve that next big event that will change the industry. It can just be a pain. Throw in the search for the perfect unification of story and art and that creates nothing but more obstacles as a reader. But with Radical's Driver for the Dead you don't really get any of that. And that's a good thing. What you do get is simple; a book that has a fun story and kick-ass art. Simply put, it's one cool comic.