Driver for the Dead #2 Review

By: Justin Moody | Comic Reviews | September 30, 2010
Alabaster Graves returns with the second installment of Driver of the Dead. Previously, Graves was hired to transport the body of legendary voodoo priest Mose Freeman who was killed during an exorcism. Graves (and yes the name is ironic) is accompanied on his trip by Freeman’s granddaughter Marissa. It’s an uneasy alliance, as Graves prefers to be alone and Marissa is unclear as to why someone like Graves is needed to transport his body.

After a six hour car ride with barely a few words exchanged, the two arrive at the house of the exorcised boy. Graves retrieves Mose’s body and they head towards the family plot. Perhaps it’s the loss of her Grandfather that makes her open up to Graves, but Marissa recounts her childhood days with her Grandfather. Feeling just as open, Graves reveals his days in the military and what “drove” him to driving the dead. 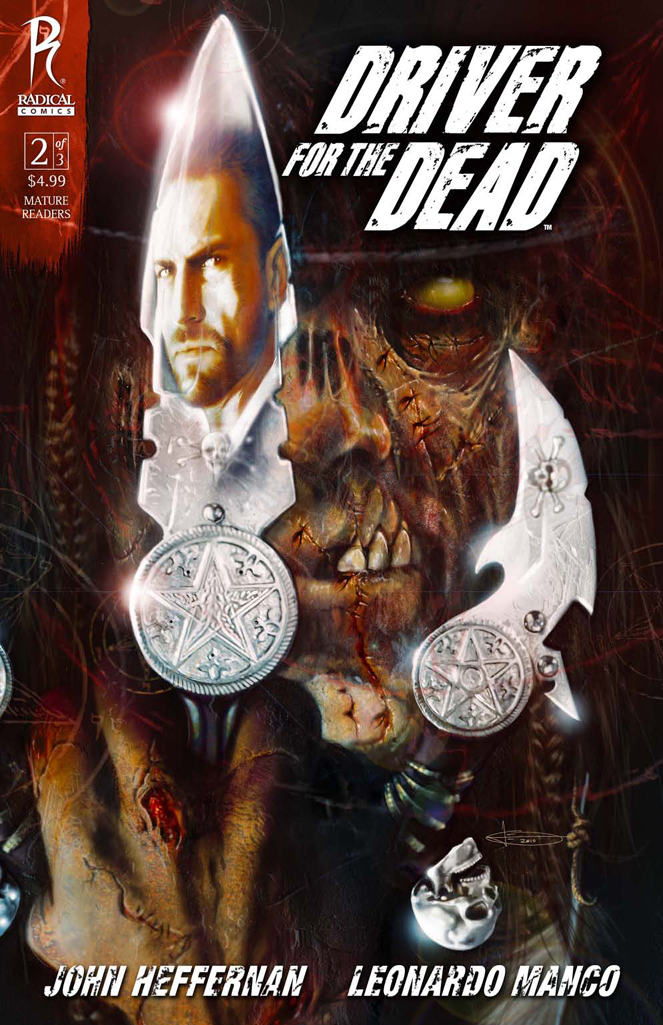 While Marissa and Graves continue their long journey home a powerful necromancer named Fallow, prepares for their arrival. Fallow not only can raise the dead, but he can take other voodoo users gifts and make them his own. First he visits a woman whose gifts lie in her hands. He and his raised army of dead tear apart the woman’s home and kill her customers. He cuts off her hands and takes them for his own. Next Fallow visits a man with a “silver tongue” and again takes his abilities as his own.

Fallow, feeling powerful enough, decides to make his move against the unsuspecting Graves. Fallow resurrects a group of dead police officers, guns and all, and directs them in Grave’s path. Their tire takes a bullet forcing Graves to pull off to the side. He gets out to finish off the Zombie Cops when he’s greeted by Fallow. Thankfully, Graves is saved by a woman with white hair and a group of hillbillies. Fallow counts his losses and goes for Mose’s body and Marissa. Graves awakens with the white haired woman who truly explains the severity of the situation.

This book is fun as hell! The book engulfs so many genres and yet never comes across cheesy or forced. Every bit of the story makes sense with the other elements working as a whole. John Heffernan, the writer and creator, has created a believable and interesting world. The ideas and history he puts into the voodoo alone make the issue worth reading. Driver of the Dead ends with issue three, but hopefully Heffernan has more ideas for the characters and the world. Graves may drive a ridiculous car that is completely loaded to the teeth, but it makes the character cooler and that’s what he needs to be. He has to be this unbelievable bad ass because otherwise there is no way he could defeat what he’s up against.

The art style is extremely detailed which works perfectly with the horror theme of the book. The attention to detail that Leonardo Manco puts into each panel gives the book a personality of its own. The characters are very life like and when one of them is killed, it makes it all the more gruesome. Manco is also very talented at drawing a variety of objects. He’s able to draw guns, cars and settings that are astoundingly real. It really shows the strength of his pencils to be able to do that.

This book has quickly become a must read and I’m actually saddened by the fact that there’s only one issue left in the series. The book in general has a Cal Macdonald Criminal Macabre vibe to it, but without the over the top personality of Cal. That being said Criminal Macabre has enjoyed a lot of success as a reoccurring mini-series. If Heffernan and team have the same plans then by all means… carry on!

Right now Radical Comics is having a contest on their Facebook page, where if you buy and review Driver of the Dead #2 you can win prizes a go-go! Head over to their facebook page to learn more or you can read our posting about it here.