Duels of the Planeswalkers 2012 PC Review

Duels of the Planeswalkers 2012, the sequel to the 2009 downloadable game of the same name, is a Magic: The Gathering-based game that allows players to play with pre-built virtual decks in order to duel their friends and progress through three campaigns, each more difficult than the last. The original game was met with generally positive reception, despite getting plenty of complaints for the complete lack of deck building. Does this sequel pan out to be a better experience? Read on to find out.

Duels 2012 uses gameplay elements that are core to what appears to be the Mirrodin block of the trading card game’s history. This means that artifacts, which are colorless permanent cards that can be creature, passive, or equipment, take a relatively large role in the game, with a specifically built artifact deck available to players a few battles into the campaign. I’ve been an off-and-on Magic player for quite some time and I have generally enjoyed the way that the game’s flow played out. Rules are directly stated on most cards, and when they are not, they are listed via a “more information” button located to the side when you zoom into a card. The game’s logic system does a good job of parsing rules, making little guesswork for players when they aren’t sure what can or cannot be targeted, and tends to be forgiving by letting you cancel a card provided any other effects have not went into effect originating from it. My only major gripe about the gameplay itself is how completely calculating the game’s enemy AI is. It seems to always be a step ahead, even on the easy difficulties, and while it is relatively easy to trick it by exploiting its logic, oftentimes it just outright gets better cards. It’s been said that on the hard difficulty, it even “cheats” by pre-placing powerhouse cards towards the top of the deck. That is no good. 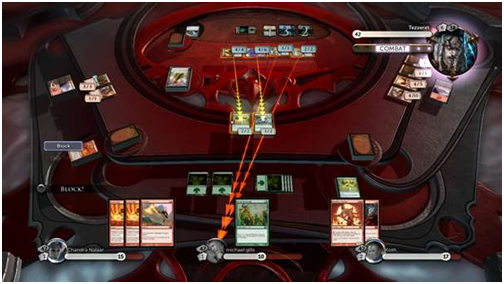 Deck building, or the lack thereof, was a major complaint in the original 2009 Duels game, leaving a lot of players frustrated that they couldn’t remove any cards from their deck to even out the cards they unlocked and added from the campaign. Generally, that hasn’t changed outright, but Duels 2012 allows you to both add unlocked cards from your sideboard into your deck, and also to remove existing cards that you may not want as many of. It also lets you put as many cards in as you want, similar to the first game, but it does enforce a strict 60 card lower limit. Targeting was a small issue as well while playing, as it wasn’t apparent in 3- and 4-player games that you could click and drag to target specific players. For the first few games, my friends and I assumed you were simply stuck attacking the person to your right at the virtual table. In addition to this, clicking on cards gets generally difficult and annoying when a lot of cards end up on the table, as they’re clustered together so close you can easily mis-click on the wrong card.

The graphics in Duels 2012 are surprisingly amazing, which is surprising from a game where the only real thing you need to render is a table and the cards themselves. The user interface is a great improvement over the first game and navigating menus are a lot less frustrating. There are unique tables for each game mode and the number of players participating, which somehow ends up being more interesting than the first game where you played on various mana color-themed tables. The general polish is there, and it shows through very well. The only gripe here is the same as I had in the first game, which is attack animations. Damage and attack animations pop up during creature combat, and while some may like this feature, for most players it will just be turned off as it is simply time-consuming and not that interesting to watch. Granted they are short, but some will just hate them for being there at all. 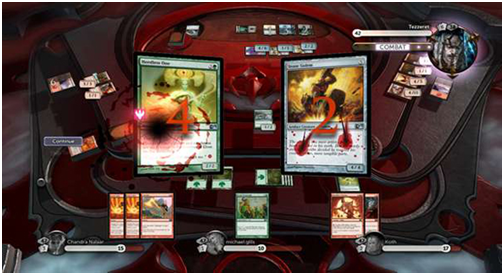 Duels of the Planeswalkers 2012 ends up hitting a lot of high notes, doing a very good job of improving upon its predecessor. There are a few minor annoyances, some new, some carried over, but overall it ends up far surpassing what many expect a retail trading card-based video game to be. Whether you are a longtime Magic veteran, or if you’re just wanting to see if it’s a game you’ll enjoy, Duels 2012 is nice and cheap, very well made, and is incredibly fun and satisfying (if a little frustrating) to play. Pick it up and share it with your friends. It’ll be well worth it.