Hungry for more Duke Nukem Forever?  Or perhaps you have an acquaintance who plays this game, and their birthday is next week, and you really don't know what to get them. Good news. For ten bucks, you can purchase the Duke Nukem DLC "Parody Pack".

If you are willing to buy this, it'll be available on Tuesday October 11th, and will include three new modes: Freeze Tag (where players battle with freeze rays), Hot Potato (a variant of "Capture the Babe"), and a "Free-for-all, Duke style" in Hail to the King. 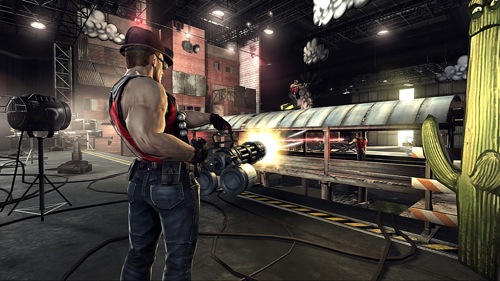 There are also new maps, each a spoof of shooters past and present:

Call of Duke – Duke engages in modern combat in a war-torn city. Foes don't stand a chance against the Duke when he spams the map with the N00b T00b.

Sandpit – Players take the role of mini-Duke in a giant sandbox with two bases at either end made out of children's toys. This map features Sticky Bombs.

Inferno – Time machine engage! Duke does combat in a hellish landscape of lava and teleporters. Who turned on the 16-bit graphics, and more importantly, where did this DFG come from?

2Forts1Bridge – Hats? Duke loves hats. Give him a minigun and take down all comers.

Will this new DLC make new players buy a copy of Duke, or does it just make you want to put in a few more hours with the free-to-play Team Fortress 2?  Sound off in the comments below.