I’ve joked that I would not believe this game exists until after I’ve played it.  In development for fifteen years, Duke Nukem Forever has long been the butt of many vaporware jokes (Including a few of my own). However at PAX East there was a demo on-hand, and I can say that I have played it, and I confirm that the game does exist. Based on what I’ve seen from the demo, it should be fun to play for shooter enthusiasts, and a treasure-trove of nostalgia for Duke fans.

Originally developed by 3D Realms, close to 15 years ago, the torch has been passed to Triptych games and Gearbox software who have taken the original game and polished it into a proper next-gen game.  Duke Nukem Forever plays much like other modern FPS games, you run, jump, shoot, zoom-in, and throw the occasional melee, as you’d expect.  What sets Duke Nukem Forever apart from the current crop of shooters is its bawdy sense of humor, and tongue-in-cheek goofiness. 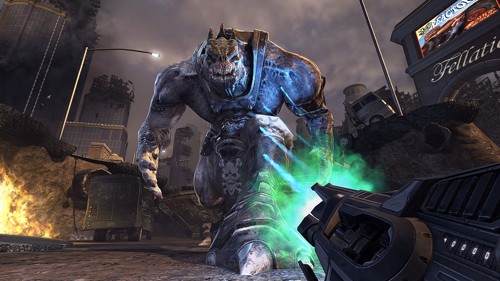 Right from the first person urination sequence that started the demo, up to the oral sex joke at the end, this is not some serious military sim that explores true-to life political situations; this is a game where a pair of hot schoolgirls pleasure Duke while he plays a video game starring himself. What might come across a frat house comedy has morphed into a form of meta humor, a self parody of a game that is itself a parody of the FPS genre. “The game is very self aware“ says Chris Faylor, Gearbox’s Community Manager, “Duke is larger than life, and he knows it.”

The demo started with me standing in front of a urinal, controlling Duke’s wiener from the first person perspective; mercifully, only a stream of urine was visible, and I suppose this sequence served as a rudimentary tutorial on how to aim and look (In the unlikely event that the Player might not already be familiar with FPS controls).  From there it was right into more jokes and action.  I headed into a meeting room where I had the chance to confer with some soldiers who informed we that we were about to engage in “Operation Cockblock” a plan to keep aliens from stealing Earth’s women. 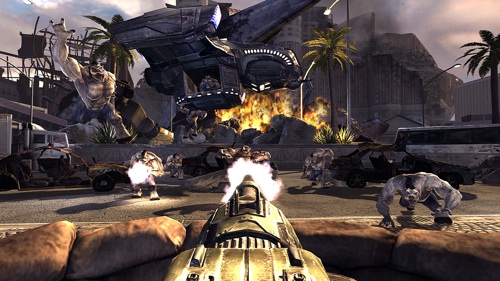 Soon the entire squad was wiped out, and it was up to me to bring down a giant boss monster.  Standard circle-strafing won the fight, but instead of just blowing up, or falling over dead, the Cyclops I was fighting slumped over, still alive.  This was my cue to run over, hit a button on my controller and trigger a sequence in which Duke rips out the cyclops’ eye and kicks it like a field goal (A nod to one of the older Duke games).  In fact there are going many such insider jokes throughout the game, so anyone who enjoyed Duke back in the nineties will get an extra amount of entertainment out of Forever.

While the combat itself felt very familiar, the sense of humor gave the game something to make it distinct.  Surrounded by a sea of gritty, realistic shooters, and many games that fancy themselves as high art, Duke Nukem Forever stood out from the crowd with its unabashed mindless violence, sex, and profanity. 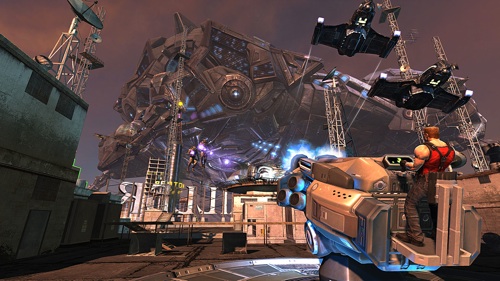 Duke Nukem Forever comes out in North America on May 3rd for XBox, Playstation 3, and PC.  A “Balls of Steel” Edition is also being released which includes a 100-page hardcover book, a Duke Nukem comic book, a set of Duke playing cards, poker chips and dice, along with a Papercraft, some postcards and stickers, and a bust of Duke Nukem.  It has a well-earned M for "Mature" rating.

UPDATE!
This is not a joke.  It's been delayed again.  June 14th for North America, June 10th everywhere else.