By: | PC Reviews | June 15, 2011
At this point, Duke Nukem Forever has become a legend, regardless of it's quality. It has been in development hell for the past 14 years, and considered dead for a while, only to be rescued by Gearbox Studios and 2K. Now, it's been released, and while the fact that it has been finished at all is something of a minor miracle, the actual game is far from miraculous.


The story of Duke Nukem Forever, while set after the events of Duke Nukem 3D, shows little reference to it's predecessor, other than the opening intro and the knowledge that aliens have invaded before. Duke is now a superstar, and the first 30 minutes of the game are little more than ego stroking, showing how "awesome" Duke is. Of course, things don't stay this dull for long, and the aliens invade once more. The actual plot of Duke Nukem Forever is incredibly simple, ranging from "go here" to "do this", with no other motivation than to repel the alien invasion. Forever tries to characterize its simplistic plot through the dialogue and humour, at which it marginally succeeds. Duke Nukem Forever definitely has a personality, but it's not a personality you'll enjoy. The jokes from Duke are either lazily crude, or lazily referential. At one point, Duke's commanding officer says that he has to save America, and Duke simply sings "America, fuck yeah!" These references are also very old, which betrays the long development time.
Duke Nukem Forever plays quite differently than it's 90s predecessor. The biggest difference is the health system. Rather than the static health system of Duke Nukem 3D, Duke Nukem Forever employs a recharging health system, but it's called "Ego" The maximum Ego capacity can be increased by lifting weights, doing well at pinball, and otherwise interacting with specific parts of the environment. This system works very well, because it encourages the player to explore and interact with the environment, as well as keeping a sense of constant progression. If you choose not to explore, you'll still gain health over time, because the Ego capacity also increases every time you beat a boss. The other change from Duke 3D is the weapons system. In Forever, Duke can only carry up to 2 weapons at a time, unlike 3D, where Duke could carry all of the weapons at once. This change makes little sense, as there's not much tactical consideration for fights, and the only effect this system has on the gameplay is more unnecessary management of inventory. 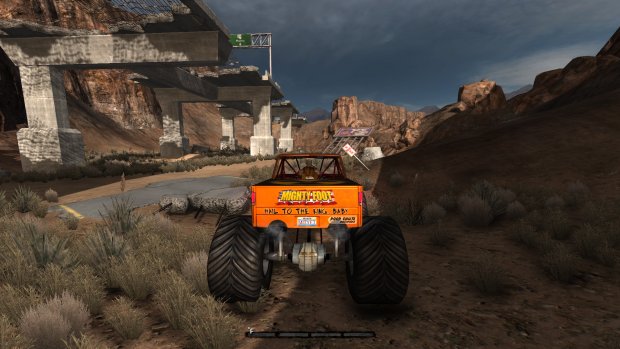 The core shooting can be mildly entertaining at first, mainly due to the weapons at Duke's disposal. There are some standouts here, like the incredibly powerful shotgun, and the entertaining shrink ray. Dismembering a pig cop with one shotgun blast can be quite gratifying, but the effect wears off over time as repetition sets in. Make no mistake, there are numerous things to do in Duke Nukem Forever. There are turret sections, platforming bits, a pinball table, and driving sequences, The problem is the length. Since Duke Nukem Forever is longer than your average shooter (about 8 hours), a lot of those gameplay elements are repeated ad nauseam, until you are sick of them. By the end of Duke Nukem Forever, you'll be bored of every scenario it throws at you. Whenever you aren't in the middle of a new (or thoroughly repeated) gameplay element, you are simply walking from point A to B. Entire levels of Duke Nukem Forever consist of you walking, and occasionally punching open grates to proceed.
The level design in Duke Nukem Forever also leaves something to be desired. There are several moments where you will have no idea where to go, and while the game highlights objects often, it never highlights what you need to do when you need it most. This leads to artificial lengthening of the game, as there were a couple of times where I just ran back and forth for 10 minutes, trying to figure out where to go. When you aren't confused, you're reminded of how old this game really is, because of the strange pathing through the levels. There are several jumps that you feel that you shouldn't be able to make, but turn out to be the correct way to proceed. This makes playing Duke Nukem Forever a frustrating experience, and when it's not frustrating, it's dull and boring.
There is multiplayer in Duke Nukem Forever, but it's a shallow and derivative experience. There are only 4 games modes, and they are all very standard for the FPS genre. The player limit is 8, meaning that most of the time you're looking for the competition rather than engaging it. The maps, what few of them there are, are of a low quality. As awesome as it sounds to play multiplayer on the first level of Duke Nukem 3D, it isn't, especially with the poor redone graphics. The multiplayer has the leveling system of the top-tier FPS multiplayer games, but it seems to have missed the point, because the levels don't unlock any in-game items. All they do is unlock aesthetics for "My Digs", which is a separate game mode where players walk through Duke's penthouse, admiring pictures, "babes", and statues that are unlocked by the levels. This would be interesting as a side addition, but as a complete replacement for traditional weapon and attachment unlocks, it fails.

Duke Nukem Forever is an incredibly old game, which has been modernized in the last few months. As a result, the graphics look exactly like that. The models, animations, draw distance, and textures all look grimy and blurry. However, many objects look unnaturally shiny, and lighting has been added in specific areas. It's like Gearbox is trying to distract the player from 3D Realm's aged and poor graphics. It doesn't work. The audio is similarly unimpressive. The music is forgettable, the weapons lack any audio punch, and the voice acting for anyone besides Duke Nukem is horrible. That's not to say Duke's voice actor Jon St. John gives a great performance, it's just better than all of the other unconvincing and frequently grating annoying voice acting. There are also load times after every single death, which gets annoying quickly, as well as increases your time with Duke Nukem Forever, which is never a good thing. If you're going to buy a version of Duke Nukem Forever at all, make sure it's the PC version, as the the framerate is far smoother, and the load times are shorter.
Duke Nukem is a bad game. The gameplay is boring and frustrating, the humor is lazy, the multiplayer is worthless, and the graphics are poor. It's incredible and ridiculous that this took 14 years to make, as I could easily imagine a developer making a better game in 6 months. I'm glad that I played Duke Nukem Forever, though, because I realize that it's a horrible game, and there was never a chance of it being any better. I suggest that everyone else should do the same, except without playing it.
Rating
3.5