It's been an extremely long and rocky road for Duke Nukem Forever but it is finally here. There has been a lot of excitement over it's release, with people just craving to know what exactly has been produced after such a lengthy and troubled development. Unfortunately, Duke Nukem Forever is far from being a quality title, but it is in equal measure, far from being overly terrible. It is as much as anyone could expect from a project that took over 12 years to complete and went from engine to engine in order to keep current with industry standards. It is also very clear that the game Gearbox received when they bought the rights to the Duke Nukem franchise last year, was not fully finished and it remains that way upon release.

This is most obvious in its graphics,which by comparison with even early PS3 releases look downright awful. Scenes are littered with blurry, unfinished textures and at most times a noticeable harshness in the lighting effects. The result is a game devoid of any atmosphere at all, with uninteresting levels that meander on and on with nothing particularly interesting to look at. NPC models animate poorly with virtually no kind of lip sync, and movement and gestures akin to characters from GTA: San Andreas on PS2. Enemies animate quite a bit better but their transition from one animation to another can be stilted at times. The frame rate takes a massive dive during most sections of the game whenever there are multiple explosions or other particle effects happening close to the player, and load times are clearly not optimised, with loads of 20 to 30 seconds and upwards being typical.

Poor graphics could been somewhat excused had the gameplay been at least above average but it is bogged down by dated game mechanics and mundane level design. The core gun play at the heart of Duke Nukem Forever is solid but the situations that the player is placed in are most certainly not, especially by today's standard. There is a recurring theme of corridor crawls met by large open rooms at the end. The room will then be filled with waves upon waves of enemies that, for the most part, will just run at the player over and over again. The result is boring and predictable encounters at almost every turn in the game. Boss encounters are equally routine and consist of hiding behind cover while the boss attacks and then firing as many rockets as possible while you can. All of the bosses are like this and all are killed by a quick time event that will always involve massing the X button as fast as possible. It's extremely lazy design and it may have worked for Duke Nukem 3D way back in 1996, but it most certainly does not now. 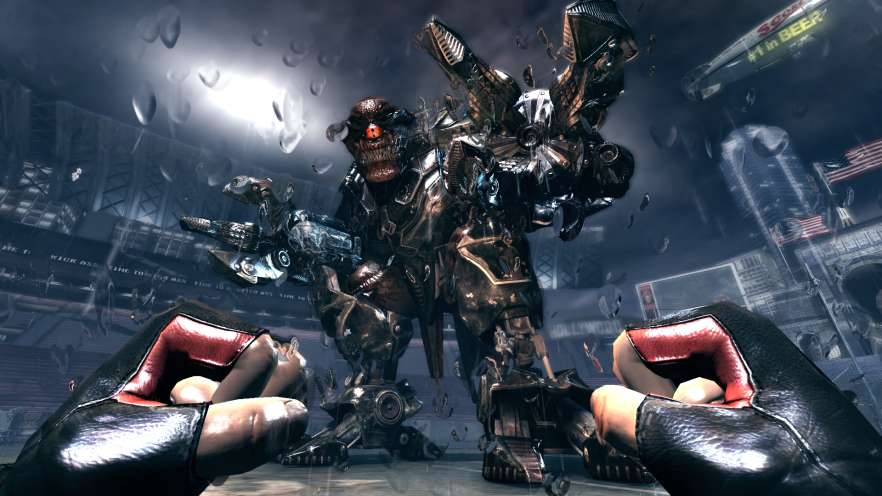 As with most shooters today the levels are linear, but modern games tend to break the action up with scripted set pieces that immerse the player in the world and provide a break from the standard action of the game. DNF provides this to some extent with two sequences that recur throughout the game.b The driving and platforming are horrendously boring. The driving levels last for an extended amount of time and absolutely nothing of any worth happens in them. There is no danger of failing and they feel like you are simply driving in a straight line for about 20 minutes while jumping over ramps. There is a reason why platforming does not appear in any decent modern fps game. It never worked well and it continues that trend in DNF. For the driving, these sequences are drawn out and frustrating affairs that most probably show the games age more than anything else. The last time platforming was accepted in an fps (was it ever?) is when DNF should have came out, and that was a long time ago.

Both the health and weapon systems have come under scrutiny since the release of the DNF demo. No longer is health measured by a number, nor is it restored with health packs á la Duke Nukem 3D. Instead, Duke has a shield, called his Ego, and a set amount of health after it depletes in the style of Halo. Your can hide your character behind cover as you wait for the shield to recharge and continue fighting, but I didn't find the system to majorly detract from the experience whatsoever. Had DNF incorporated the older health system, it would still have been poor quality. In addition, he new weapon system, despite it limiting the player to two weapons at a time, does not effect DNF in any significant way. Yes it would have been nice to carry 3 to 4 weapons around. But, for the most part, enemies typically carry shotguns or the standard machine gun and that's about it, so ammo for nearly every other standard weapon is scarce and there isn't much variety to begin with. Pipe bombs and trip mines harken back to older Duke Nukem experiences and the RPG and Devastator make appearances only when the game decides you need them for a boss fight or particularly difficult standoff. Outside of these situations, ammunition for these weapons is extremely limited. The inability to carry all the weapons at once is far from a game breaker. 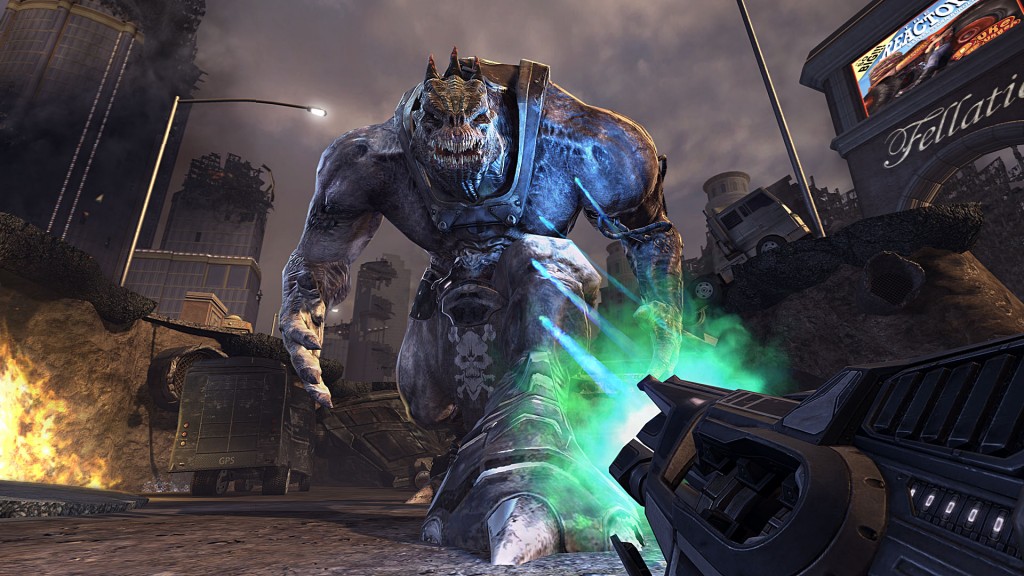 DNF also has a multiplayer component that does it's best to emulate the revered multiplayer of Duke Nukem 3D. However, it is perhaps a little too accurate an emulation to hold up on a console today. The character movement is fast and as such the player has to be very quick and very precise in order to actually kill something. Now, I recognize that to play something like COD well, you have to have a grasp of speed and good precision also, but the multiplayer in that franchise just feels natural with a controller. DNF's multiplayer feels foreign on a game pad in the same way Unreal Tournament 3's did, with it also trying to embody the faster style of PC shooters from the 90s. DNF has standard set of modes with death match and team death match, CTF and King of the Hill all present. Players can earn XP to advance in levels and grant them new items to place in Dukes L.A. Penthouse. All of the rewards are seen throughout the main story anyway, and the whole idea is the last thing any player could possibly want. Who wants to spend there time roaming around a virtual apartment looking at horribly aliased and blurry statues of Duke Nukem? Or trying to flirt with a virtual maid? Nobody, that's who.

Duke Nukem Forever is not a terrible game. It is a game that could not really be recommended to anyone. Any kind of over-arching story is nonexistent. Apart from a 'aliens are here, better go kill them' theme, there isn't much else in it. Gameplay, while boring for the majority of the game, has some decent moments and it's never adversely broken in any way. The only thing that makes Duke Nukem Forever in anyway interesting for anyone at this point, is a kind of morbid curiosity to see exactly what 3d Realms had been making all this time and what sort of game Gearbox was willing to put out. Sadly the result is an outdated and incomplete, relic of a time long forgot, and it won't be long until Duke Nukem Forever sees a similar fate.