Duke Nukem Forever: Will It Live Up To The Hype?

By: | PC Features | June 14, 2011
Duke Nukem Forever releases tomorrow, and the hype for it's debut is understandably high. This is a game that was announced in 1997, and is being released now in 2011, 14 years later. It's shifted companies, engines, and release dates with reckless abandon.  As a result, it can be hard to know what to expect from this high profile shooter.


Since the events of Duke Nukem 3D, Duke has essentially become the most powerful man on Earth. Saving the planet from aliens has given Duke fame, power, women, and plenty of money. Duke even has his own video game (which took 10 years to make, fancy that). Unfortunately for Duke and the rest of the planet, though, the aliens have come back, and the president thinks that they're coming in peace. Duke knows better than that, so he moves out to kill pig cops and aliens, and make crude jokes in the process. 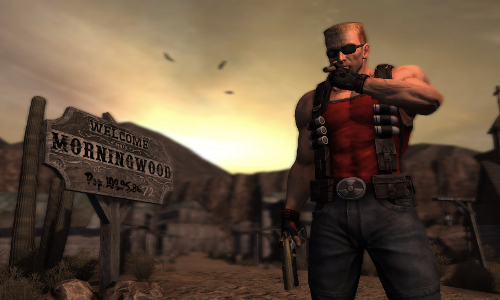 Duke Nukem Forever's gameplay, having been in limbo for the part 10 years, is quite dated, but not necessarily in a bad way. Enemies have aggressive and simple AI, getting as close to you as possible, or teleporting to a new (but still close) location to resume shooting at you. The enemies don't take cover, and they don't try to flank you in any way, but they have strength in numbers. Unlike the older shooters it reminds you of, however, Duke Nukem Forever does not have a numbered health system. Duke isn't protected by armor or health, instead, he is protected by his Ego. The Ego meter in DNF works exactly like a normal health meter, except it can be recharged by self-indulgent acts, such as signing autographs or lifting weights.
The weapon set in Duke Nukem Forever is fairly standard, with pistols, shotguns, and miniguns. There are some outliers, though, like the shrink ray, returning from Duke Nukem 3D. The interaction with the environment isn't as standard, with weight lifting, pinball machines, and more. The level interactivity with objects in the environmet is reminiscent of Half-Life, but the actual levels have their own personality. There's one level where Duke is shrunk down, so he fights enemies while running across craps tables, and pilots and RC car. 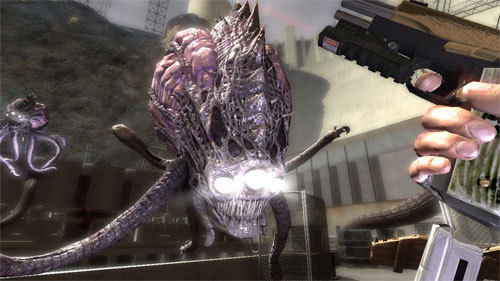 Aside from the singleplayer, players can partake in several multiplayer modes, including Dukematch, Team Dukematch, Capture the Babe, and Hail to the King. Dukematch is your standard free for all mode, Team Dukematch is Team Deathmatch, Capture the Babe is Capture the Flag, and Hail to the King is DNF's take on King of the Hill.
In case you didn't realize it by now, this game is ridiculous. The tone is consistently tongue-in-cheek, and Duke's dialogue is written to either make you laugh out loud or rest your head in your hands. Whether or not you enjoy the story, tone, nudity, and dialogue is probably what will make or break your decision to buy Duke Nukem Forever.
Duke Nukem Forever is definitely a throwback, though I feel that word doesn't fit it, considering it was intended to be released in 1997, rather than inspiring nostalgia for 1997 in 2011. The shooting is simple, the AI is simple, and the tone is ridiculous. The graphics are definitely showing their age after the over-extended development time, but they aren't the worst graphics out there. If you want some over the top, B-Movie entertainment, Duke Nukem Forever looks like it will satisfy that need.