Be glad this games exists.  A few years ago the Dungeon Siege franchise was going strong, then “filmmaker” Uwe Boll adapted it into a horrendous movie that nearly killed the franchise.  It took a new publisher and a new developer to salvage it, so we should all be grateful anything Dungeon Siege at all.

The demo for Obsidian and Square Enix’s revamp of this action RPG series arrived on Xbox Live today, and we here at Player Affinity have hacked AND slashed our way through it to see what this foretells for the game.

It starts with an animated cutscene that fills new players in on the story of the previous games.  If you haven’t played the previous games this just boils down to “The Bad Guys are bad”, and your character is one of the last descendants of the only group that can save the kingdom.  Depending on which of the playable characters you choose, you’ll get a different introductory story. 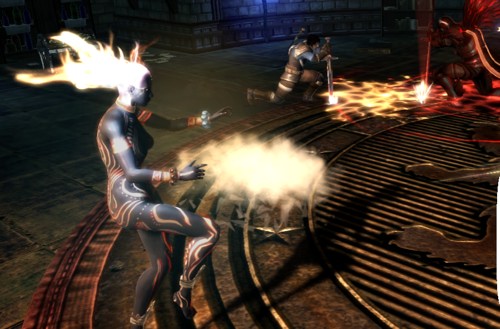 Because it’s a demo, players only have access to two of the four playable characters.  One is Anjali, a more-than-human woman who can transform into a being made of fire.  A key part of making this game unique among the other hack ‘n’ slashers is that all of the characters have two Stances, or Forms.  Anjali’s fire form is one, and she can run around as a spear-wielding human too.  The fire form is great for shooting projectiles, and pounding single targets, while the human form is better for fighting groups of enemies hand-to-hand.  Each stance has its own set of abilities that can only used with that stance.

The other playable character is Lucas Monbaron an armored knight whose stances are the high-defense Sword & Shield, or Two-Handed sword that lets him dish out the damage.  There’s enough content in this demo for both characters to level up a couple of times, and gain new abilities, so it will give players a good look at how skill trees will branch out. 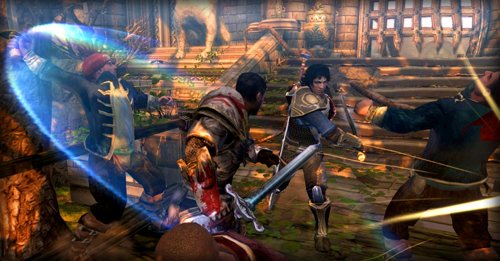 Once you get into the demo, it’s a pretty linear adventure.  You have the occasional side path that leads to a dead-end full of barrels to smash, but you’re basically on a straight trip through this story.  Hopefully the full game will have more options for exploration and will include side quests.

The developers purport that Dungeon Siege III will offer players “Weighty decisions” that affect the story, but that wasn’t something seen in this demo.  While NPC conversation did have multiple dialog options, there didn’t seem to be an alignment system. It also appeared as though you have little opportunity to affect the outcome of events, by which I mean you’ll always end up fighting the enemies, or accepting the quest and NPC tells you about.  Perhaps the full game has more robust options for talking things out, but it isn’t apparent in this demo.

But gamers probably aren’t playing a hack ‘n’ slash game for all that talking anyway. What’s really important is the fighting, and that’s well done here.  The feature of giving characters different stances adds variety, and players have the option of focusing their skills and upgrades on just one stance, or creating a more diverse hero by spreading points around both stances.  This has a lot of promise for the full game, because it will have online multiplayer co-op, and players can build a hero to suit a hyper-focused role on a team.

Although the other two playable characters, Reinhart and Katarina aren’t available, the busty gunslinger Katarina does make an appearance as an NPC for those who are curious about her backstory.

The demo is available on Xbox live now, and the full game goes on sale June 21st.  We’ll have a full review after the game drops, and more preview coverage as it comes available.