Fergus Halliday writes:  It’s been quite a while since the last Dungeons and Dragons video game, and while D&D fans should be looking forward to the Neverwinter MMORPG, they will also be happy with the recent announcement of Dungeons and Dragons: Daggerdale which is coming to digital distribution platforms for the PC, Xbox 360 and Playstation 3.  The story of Daggerdale looks to be typical D&D fare with the player fighting a desperate struggle against an evil mage named Rezlus, who is attempting to conquer the Dalelands where the game is set. The player must uncover the secrets of the Mines of Tethyamar and eventually face Rezlus in the Tower of the Void.

While Daggerdale is set to provide numerous options for adventurers playing through the game. It should be noted that Daggerdale is labeled as an ‘action’ game. While it will feature combat, it will also have questing, character development and exploration mechanics. Players won’t be able to create their own characters to play as; instead they will choose from one of four predetermined race/class combinations.  Players will be able to customize their characters according to the D&D 4th edition rules, gaining skills and abilities as they earn experience points and level up.  While the RPG options of Daggerdale look to be less than previous D&D games, Daggerdale will feature a drop-in drop-out cooperative play feature.

Players will be able to fight through the campaign by themselves or with up to four friends. Atari has claimed that Daggerdale will feature a good ten hours of gameplay and it is set to be the first in a trilogy. While the graphics aren’t cutting edge like Dragon Age 2 or The Witcher 2, Bedlam Games have made up for it by focusing on the distinct D&D art style.  With the way that the multiplayer and character options have been described by the developers, it sounds like Daggerdale will be more like Gauntlet in some ways than previous D&D games. Not that this is necessarily a bad thing.  While Daggerdale might lack in the character progression department, it looks like it will make up for it with the solid dungeon crawling that will give D&D fans something to cheer about.

Mark Quinlan says:  Do you like hack and slash beat-em-up gauntlet-type actionfests? Then you’ll probably get a kick out of Dungeons & Dragons: Daggerdale, a lightweight downloadable title that takes place in the popular Forgotten Realms campaign setting.  The story of Daggerdale takes place in the lands of Faerun.  An army is amassing to assault the world from both the Mines of Tethyamar and the Tower of the Void, the primary dungeon locales that the game will span over its story.  It maintains character development along familiar D&D lines; the completion of quests and defeat of enemies will build up character levels (improving stats as well as granting new feats and abilities) and opening opportunities for customization beyond the basic archetypes. Of course, if story is not in your interest, there is an action-heavy freeplay mode as well where you can jump right into the combat with prefab characters or imports. 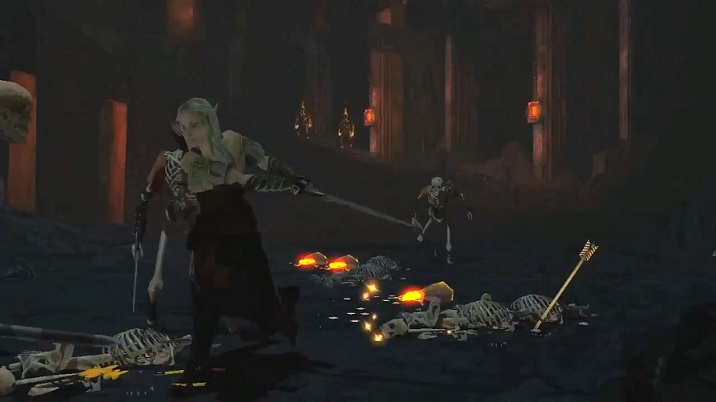 Predetermined characters are a limitation, but the four used in the game (dwarven priest, elven rogue, Halfling mage and human fighter) fit the old-school arcade RPG system wherein similar archetypes cooperated towards victory despite insane odds. One of each character can be used during co-op play, although different builds that a player has developed over game time can be swapped in at any point.  The gameplay itself is designed with the console Dragon Age system in mind, with user defined buttons for specific attacks and spells.  Action is fast and precise, as players must actively block and dodge to avoid damage. Treasure is amassed which you can use and equip, but the option always remains to return to town to visit merchants and purchase supplies with your newfound wealth.

As a $10 downloadable title, Bedlam Games’ Dungeons & Dragons: Daggerdale is proving that it may stand above similar titles in breadth and depth. Whereas other dungeon-crawlers focus more on the action, Daggerdale appears to be conscious of the fanbase that can be utilized by including statistics, questing and a well-known setting. Even if players are limited to preset characters and their associated classes, customization is a continual theme, allowing for different experiences upon replay. D&D: Daggerdale is set to be published by Atari and released on Xbox Live Arcade, the Playstation Network as well as on PC by mid-year.