Dungeons is a new title from Realmforge Studios that takes another look at the dungeon simulation genre in an innovative and fresh way. In a similar game, Dungeon Keeper, the player had to take care of the creatures in their dungeons in order to properly defeat heroes who would dare to enter the ever changing labyrinth. While that remains an important component of developing your dungeon, Dungeons seeks to properly satisfy the invading heroes’ lust for gold, treasure and advancement in order to harness the Soul Energy stronger heroes possess. As the formerly most powerful Dungeon Lord amongst competing Lords, the player must ascend the ranks and regain the majesty they once had; previously weaker Lords have become your new bosses and you must often complete tasks that meet their particular idiosyncrasies. 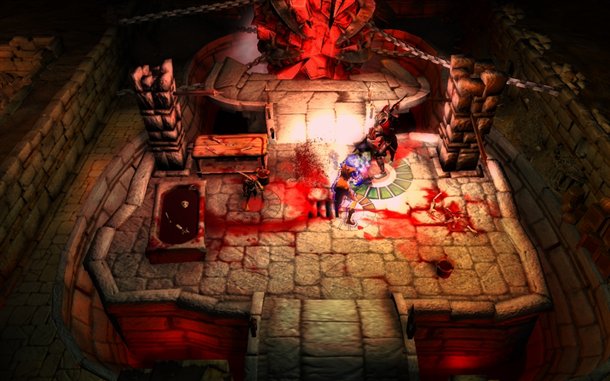 At the heart of Dungeons is the now-classic tower defense game, in which players fortify a long series of passages to repel a constant stream of invaders. To encourage creative, well-thought out designs, money to build your creations comes in the form of Soul Energy, an essence that you drain from heroes entering the gauntlet. However, the amount of Soul Energy is minimal if the hero is dealt with quickly: this is because the Energy a hero has is dependent on the level of his satisfaction with the dungeon. You'll increase the energy you harvest by carefully controlling the successes of the enemy hero, granting him difficult challenges and providing generous loot to equip him for future challenges. You do this by judicious use of your builder-goblins to clear out sections of walls and construct defenses as well as utilizing monstrous creatures that come to fight for your cause: usually harassing a nearby town or something similar. Once a hero is completely satisfied with the rewards of his exploits, his Soul Energy is at its height and is prime for harvesting with your Dungeon Lord. The profits are then used for new expansions. The title sports 20 campaign missions and offers over 50 objects to populate your design. 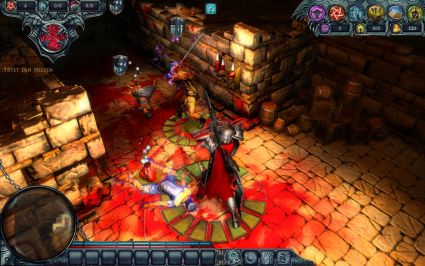 Dungeons is looking to fill a void left by the legacy of the Dungeon Keeper series. However, while there are many similarities to the classics, Dungeons shifts the focus to making the design a fun and thoughtful experience just as if you were preparing a single-player level in some other game. Published by Kalypso Media, it was announced for the first time on August 12, 2010 and is set for release on February 10, 2011 in the USA and Canada. An earlier release for Germany users came out on January 27, 2011.  Some digital distributors like Steam are offering exclusive prestige items.