By: Justin Moody | Comic Reviews | May 25, 2010
Copycat continues to narrate the team's experiences on an Earth filled with simple native people. She recalls her first encounter with former team-mate Bliss and her tribe. Bliss' first encounter was different than the other members of the team. She was forcefully taken by a tribe of Amazon-type women. She's fascinated as she attempts to use her powers of emotions on them, only to find that they don't work. Apparently the "Drones" that found Bliss were raised to be emotionless to better serve the tribe.

From there Bliss is held prisoner until approached by a member of the tribe. Bliss attacks her and kills her before being detained again. Later that night she's given a way to earn her freedom by saving two lives. One of the tribe is struggling to give birth and the tribe is afraid that she'll not only lose the baby but also her life. Bliss is more of a giver of pain than joy, so it's an unusual task to help someone with positive emotions. She calms the pregnant woman allowing her to have an easy birth and saves two lives earning her freedom.

Bliss begins to wash off her captivity as one of the woman enters her hut. After a brief conversation the two find themselves romantically involved. This leads to Bliss taking over the tribe and turning them into a sex and death cult. The world is still new to Copycat as she adjusts to finding the team separated and at war with each other. Bliss' tribe approaches Frostbite's tribe looking for a tribute: A human sacrifice. 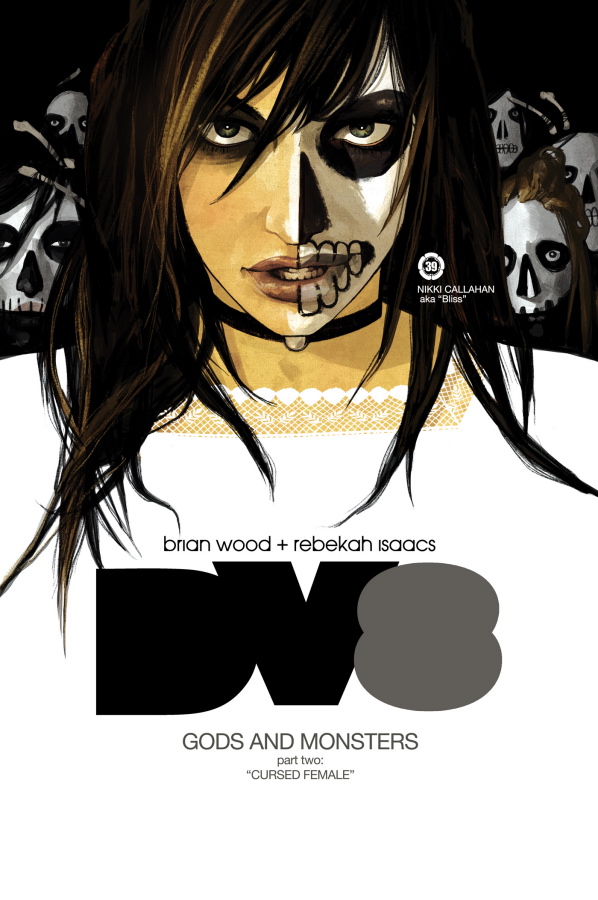 The world becomes flushed out with this issue. It's revealed that Bliss has also made it back to the space station orbiting a shattered Earth, but the status of the team remains a mystery. Brian Wood (Northlander, Local) shows a lot of creative range with this issue, due to how different it is from his usual storytelling. Although the majority of the book was a flash back, the elements introduced in the issue add an interesting twist. It's a cool concept to have super powered people leading tribes of indigenous people and warring just because they can.

Hopefully though, each issue will do more than show how each member came to be a part of their tribe. The timeline in which Copycat arrives is the stories strongest point and the most relevant. The shattered Earth also remains a mystery. Is it their earth in the future? Or is it the planet the flashback takes place on? Wood balances the mystery with plot while developing the characters all at the same time.

The art remains beautiful. The different tribes actually look differently making it easy to establish who's who. The settings drawn by Rebekah Isaacs (Drafted) are detailed and distinct. Again the different tribes have a different style of architect for the different regions they live in. Isaacs pencils unique scenery that draws the reader's eye to a particular point on the page. The art plays a wonderful part in the story by filling in some of the blanks in Copycat's narration, benefitting the reader.

This series continues to be interesting. With the first issue the team separating was the focus. Now the focus has shifted to the team deciding if they're going to be Gods or Monsters on this new planet. Either way the natives will be collateral damage in the pending tribal war. This book takes a step in the right direction by being bold and different; the way only a WildStorm title can. But the ending of the series will determine if it belongs with other classics such as the Authority or Planetary in the WildStorm hall of fame.

Another thing this book does right is the covers! They are so aesthetically pleasing to look at! Follow Dustin on Twitter and ask him anything on FormSpring.