We have many new releases and re-releases for your home entertainment pleasure this week, including our recommendation for the week, the Director’s Cut of German submarine film Das Boot. An excellent film for anyone interested in naval warfare and World War II. Also out this week isTakashi Miike’s samurai film 13 Assassins, for art-house fans there are films from France and Sweden, and there is plenty of B-Movie schlock for your enjoyment.

Re-Releases
- The Sacrifice (DVD and Blu-ray)
- Das Boot (The Director’s Cut) (Blu-ray)
- From Dusk till Dawn 3: The Hangman’s Daughter (Blu-ray)


Das Boot (The Director's Cut) (Blu-ray) *Recommendation of the Week*

What's the Deal?
The German submarine film Das Boot is a rarity, a foreign language film that was nominated for a number of Academy Awards, including Best Director for Wolfgang Petersen (The NeverEnding Story, In the Line of Fire). Starring Jurgen Prochnow (Dune, Air Force One), there have been three versions of the film – the original cut, the Director’s Cut and the four hour long mini-series. The Director’s Cut is getting a re-release now.

During the high of the Battle of the Atlantic, German U-Boats brought Britain to the brink of starvation. Das Boot focuses on the crew of U-90, fighting in the tough conditions of a World War II Submarine as the British adapt their naval tactics and turn the tide of war.

DVD Special Features: Wolfgang Petersen - Back To The Boat - Documentary; ; Going Deeper: Maria's Take, The Perfect Boat - The Director's Cut; ; Captain's Tour - Inside the Boat - The Battle of The Atlantic (1983); ; Behind the Scenes (1981) ; Commentary with Director Wolfgang Petersen

What's the Deal?
﻿﻿﻿Takashi Miike is a highly respected director in Japan and has a cult following in the West. He is mostly known for making Ichi the Killer and Audition but he is highly prolific in the Land of the Rising Sun. His samurai film 13 Assassins is a highly praised film and my colleague Simon’s best film of 2011 so far.

Set in Feudal Japan, a brutal lord rapes and kills with impunity. A group of highly trained assassins set to make a stand and go on a suicide mission to get rid of the lord.


Hobo With a Shotgun (DVD and Blu-ray)

What's the Deal?
When Quentin Tarantino and Robert Rodriguez made Grindhouse in 2007, they commissioned some fake trailers as well, made by top directors like Edgar Wright and Tarantino prodigy Eli Roth. But it was Canadian newcomer Jason Eisener who was able to make his trailer into a feature length film out of Hobo With a Shotgun, an exploitation homage starring Rutger Hauer (Blade Runner).

Hobo With a Shotgun delivers what it promises. Set in a city that makes Sin City look like a utopia, one hobo (Hauer) becomes a vigilante. Armed with a shotgun this hobo takes on drug dealers, pimps and corrupt cops, but ends up having to challenge a powerful crime boss, The Drake (Brian Downey).


Of Gods and Men (Blu-ray/DVD Combo)

What's the Deal?
Of Gods and Men is a highly praised film in France and the rest of Europe, winning the Grand Prix at Cannes in 2010, winning big at the Cesar Awards and was France’s official Oscar selection for best Foreign Language Film. Directed by Xavier Beauvois (The Young Lieutenant), Of Gods and Men is loosely based on a case of seven Cistercian monks being kidnapped and assassinated in 1996 during the Algerian Civil War.

In Of Gods and Men eight French monks live in harmony with their Muslims neighbours in Algeria. But in the area an Islamic Fundamentalist Sect is growing and violence starts to spread. The monks refuse Army protection or leave the area, no matter what happens.

What's the Deal?
If you are looking for some horror here is an offering by Hammer Films from the UK and Ireland. Written and directed by David Keating (The Last of the High Kings), Wake Wood has a strong cast, having the likes of Timothy Spall (The Damned United), Aidan Gillen (Game of Thrones) and Eva Birthistle (Breakfast on Pluto).

Patrick (Gillen) and Louise (Birthistle) are still grieving after the loss of their nine-year-old daughter Alice after she was killed by a crazed dog. They move to the remote village called Wake Wood and learn that there is a Pagan ritual that can bring Alice back to life for three days. But what will happen when she has to go back to the afterlife?

What's the Deal?
Ah Uwe Boll, where would the world of bad cinema be without you and German tax loopholes? He is the man who has mastered the bad video game adaptation and he is very defective of his work. The first “BloodRayne” film was a blot on the copy books of Ben Kingsley, Michelle Rodriguez and Michael Madsen. Anyway “BloodRayne” has a second sequel. Human-vampire hybrid Rayne (Natassia Malthe) has to take on a senior Nazi, Ekart Brand (Michael Pare) who wants to inject Hitler with her blood to make the Fuhrer immortal.

Mr. Boll, if you are prepared to challenge me to a boxing fight, I disrespectfully decline your offer.


The Sacrifice (DVD and Blu-ray)

What's the Deal?
Andrei Tarkovsky was a highly respected director from Russia, making films like Solaris and his latest Swedish film The Sacrifice.

Alexander (Erland Josephson) is a journalist and an atheist when news that World War III is about to start and is hours away from a nuclear holocaust. Alexander turns to God, praying that if he prevents the war he would sacrifice everything he has, even his son. 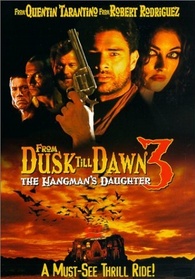 From Dusk Till Dawn 3: The Hangman's Daughter (Blu-ray)

What's the Deal?
Back in 1996 Quentin Tarantino wrote his fun vampire film From Dusk Till Dawn and got his friend Robert Rodriguez to direct it. A straight-to-video sequel and prequel were made and the prequel From Dusk Till Dawn 3: The Hangman’s Daughter is now coming onto Blu-ray. Actors like Temuera Morrison (Once Were Warriors), Michael Parks (Kill Bill Volume One), Marco Leonardi (Cinema Paradiso) and Danny Trejo have roles in this film directed by straight-to-DVD specialist P.J. Pesce.

Set in the early part of the 20th Century, it tells the birth of the vampire princess Santanico Pandemonium as outlaws and lawmen have to defend themselves against vampires in Mexico.