By: Justin Moody | Comic Reviews | June 3, 2010
The United States has finally collapsed... again. The second depression has ushered in a new era that very much resembles the Wild West. Hackers from all over the world have made it so that cash is the only trust worthy form of money. And the government passes a law to make dueling legal. Guns sales increase, but violence does not. As the story says, "People are less likely to be foolish if they know someone's holding a gun." Yes, in fact, the West is back and with it so are the Earps and the Pinkertons.

This issue is actually quite brilliant. It takes the history and the stories of Wyatt Earp and places them in the future and yet the exact same setting. Earp is a retired lawman, who became famous for hunting down famous bank robbers. That's the problem with being a cash only country, robbery becomes more common and with it famous bank robbers. 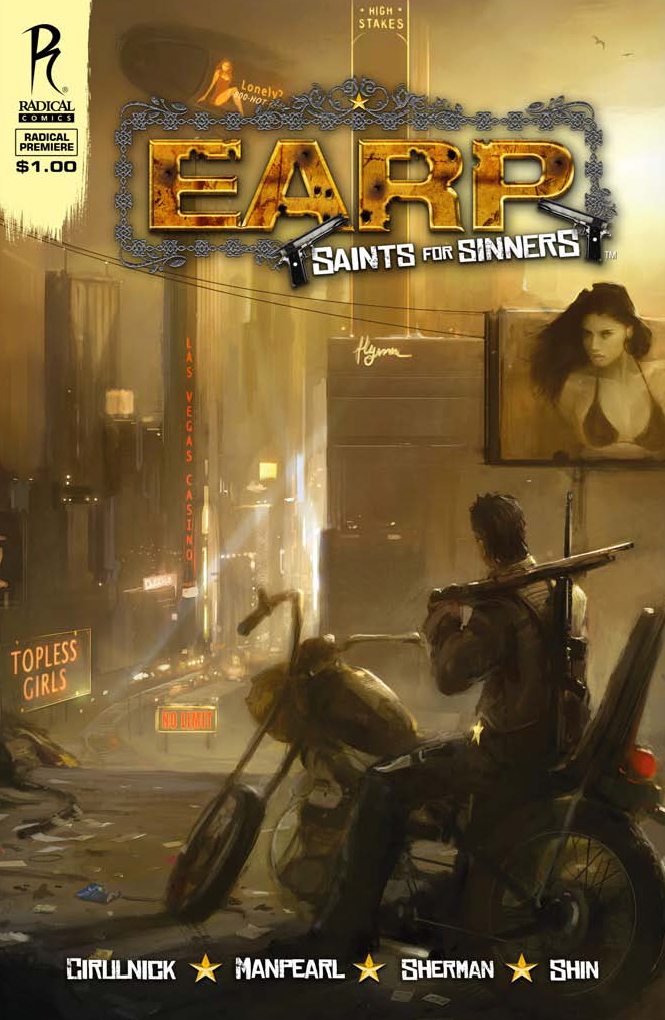 The story begins with Morgan Earp handcuffed to a chair getting worked over by some Pinkerton boys. He's able to take down his captures, as they believe they have the upper hand, all the while curse Wyatt for not being involved. Wyatt is in Vegas, which managed to be the only city not affected by the second depression. Vegas is the new boomtown, and draws in people from everywhere. They'll spend their last dollar trying to win a better life. Wyatt sits in his hotel room staring out at the city listening to a news report with a story about Jesse James. Jesse taunts Wyatt out of retirement, but Wyatt isn't willing to waste any more of his life chasing the bad guys.

The first issue is primarily an introduction of the world and acts more as a preview as to the full series to come.  It still delivers a full product at just a dollar. The idea of retelling Wyatt Earp's story in the future doesn't seem like it would work, but it really does. In fact, it's explained so well that it becomes downright believable.

Matt Ciruinick and Zachary Sherman very successfully craft an interesting issue that set up the world. There's a lot of narrative for the back-story of the issue and it works well with the story. Mark Carter and Martin Montiel have a detailed and very colorful art style. The cityscapes and landscapes in general are unique and very fitting of the story. It's a good-looking book in general with very sharp imagery.

This zero issue does exactly what it's supposed to: Establish the world and hook the reader. Yes, it's just Wyatt Earp in the future but it works. This book has appeal to western and action fans alike.

Yes Doc Holiday is in the book! Follow Dustin on Twitter and ask him anything on FormSpring.