Earth 2 #10 – Review: Flash Is So Lame He Brings His Mom on His Adventures 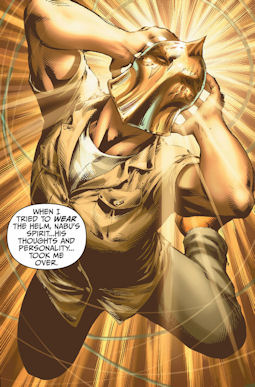 Focus turns toward introducing the new Dr. Fate of the Earth 2 universe in this latest chapter of the series, and that means a whole lot of exposition without a ton of excitement. Situations like this can usually be carried by the personalities of the characters’ involved so long as they are interesting enough. Unfortunately, our new candidate for Dr. Fate is paired with the cast member who is the most lacking in this department.

At least the new Dr. Fate himself is exciting and fresh. Who would have guessed? A character concept steeped in Egyptian mythology going to a character of Egyptian descent. Actually, I’m not sure whether Khalid Ben-Hassin is of specifically Egyptian descent, but he’s damn sure closer to the right ballpark that the white guys of the past to be Dr. Fate. Once again, James Robinson being modern and open-minded in his reinvention of the old Earth 2 material. It’s a shame that still stands in such contrast to how DC has been handling its main universe.

I’m rather liking Khalid. Much like Hawkgirl is a riff on Tomb Raider, I finding Khalid to be very similar to Dr. Daniel Jackson from Stargate SG-1. Here you have an Egyptologiist with a pretty unique and mockable area of research -- magic rather than Daniel’s alien focus -- who ends up getting drafted by the military because he’s actually right. And being right gets him into all sorts of trouble. The personalities are even similar. Khalid comes off as an intelligent guy with a decent head on his shoulders but definitely no action hero.

I realize pointing out these obvious similarities may seem like a criticism, but that’s really not how I mean it. I actually approve. Granted, Earth 2 does get a little too blatant about the Tomb Raider influences to Hawkgirl. But honestly, these weren’t wholly unique character premises to begin with, and transplanting them into the context of a superhero comic presents new avenues for exploring them. Plus, they really do suit the characters of Hawkgirl and Dr. Fate.

We also get the New 52 version of Wotan, one of the lesser used villainous sorcerers of the DC Universe but also one with legitimate ties to Dr. Fate. There’s not much to say about his portrayal in the New 52 yet, though. It’s a pretty straightforward update, tweaking his look to be less ridiculous but keeping to the color scheme and basic look. That’s really all that needed to be done with such an underdeveloped villain anyway. And while Wotan portrays himself as a typical villain, he does allude to some deeper history with Nabu that may flesh him out further. I also always appreciate civil villains. It’s just a nice change of pace from all the usual villain personalities. 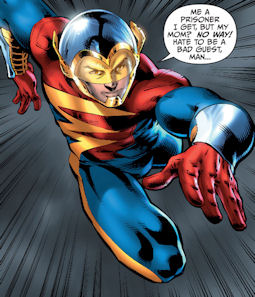 All in all, there isn’t a whole lot that happens here. It’s an issue full of exposition. Wotan explains as much as he cares to explain about Nabu and the state of magic on this Earth. Khalid fills in the blanks on his origin story and the current whereabouts of the Helmet of Fate. And finally, we end on a cliffhanger for the second part of the story arc. To be fair, this is forgivable for the first part of a story, and the exposition is more natural than Robinson often does. It’s just not that entertaining. If you aren’t going to have action, the entertainment value needs to come mostly from character interaction, and that’s handicapped by having the Flash as the only regular cast member Khalid and Wotan get to interact with.

I know I’ve said it before, and I try not to go on about this in every review. But it’s once again relevant to the issue at hand. The new Jay Garrick is awful. He’s still such a painfully generic character, standing out in a crowd of some really good revamped characters. I mean, I get it. He’s the Kitty Pryde here. He’s the youthful, optimistic heart of the cast. That’s great. But could he be at least a little interesting too? Because I’ve seen this role played out more times than I can count, and so far, Jay’s nothing but a stock type for it. He’s unremarkable in this role, and he lacks any additional personality traits that might make him stand out. How have we gotten to a point where Barry Allen isn’t the most plain, painfully dull Flash around?

And no, that is not a compliment to the New 52 version of Barry Allen. He’s still as boring as ever no matter how pretty the art on his book can be.

While the Tower of Fate business dominates much of the issue, we do get a little side plot rolling with Green Lantern and Hawkgirl. Robinson introduces an interesting twist to Alan Scott’s origin, suggesting that he was not the target of the train explosion that killed his fiance. Frankly, this is the better story at the moment, owing having both good character interactions and forward momentum. 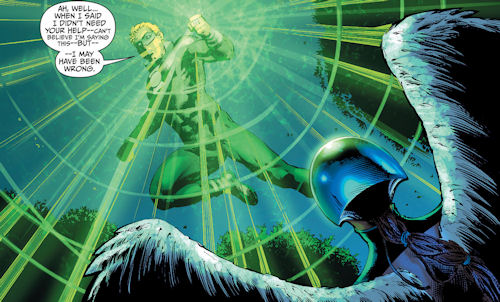 In particular, I love the scene between Alan and his late fiance’s father at the grave site. This is just a simple but fantastic scene. What’s so great about it is how Robinson doesn’t vilify the father for disapproving of his son’s homosexual relationship with Alan. It’s just so honest and heartful. No, he wasn’t cool with the whole gay thing, but he would rather his son gay than dead. He’s mourning and does so with Alan despite their past differences. I think it’s a powerful little moment.

I hate to say it, but Nicola Scott’s art looks a bit rushed and unpolished this time around. It’s nothing major. There are just some parts that don’t seem to quite be up to the same quality as usual. What doesn’t help the art is that two of the three costumes we get to see in this issue are the two weakest. I was on the fence about Green Lantern’s new look at first but thought I saw some potential to it. Now that I’m more used to it, I really just find it more and more clunky and dull. There’s no question in my mind that Alan Scott needed a total costume overhaul, but I really don’t think this does the trick. At the very least, it was probably a mistake to ditch him having a cape. But his costume only appears a couple times. The costume we get the most of is easily the worst. Behold the eye-bleeding garishness that is the Flash. We see quite a lot of him in this issue, showing quite effectively that there is absolutely no angle where his costume doesn’t look horrible.

The first part of Earth 2’s new Tower of Fate story arc is solid but nothing spectacular. It comes with a lot of explanation but not much entertainment. All hope is truly lost when you count on Flash to carry a story. Still, I am excited about Khalid Ben-Hassin, soon to be the new Dr. Fate. And the brewing team-up between Green Lantern and Hawkgirl is brief but overall a more effective beginning to a story.