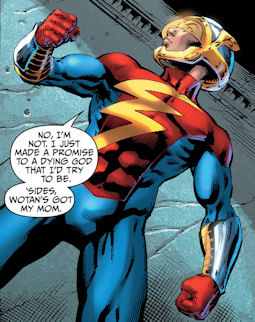 I went back and forth on whether I really wanted to review this issue. I wasn’t sure there was a point. I’m actually still not. Anyone who has read my previous Earth 2 reviews is probably aware of my views of this version of Jay Garrick, and here we have a pretty Jay-centric issue.

Come on. How do you think I enjoyed it?

It’s funny. There’s a scene in this issue with Steppenwolf and Fury, which I will get to farther down the review, where Steppenwolf makes a point that’s probably unintentionally relevant to this story. You know the metaphor he uses. A chain is only as strong as its weakest link.

I know, I know. I’m tired of me complaining about him too. But this issue puts the focus on him so I really can’t get around it. This is meant to be the character’s big, inspirational hero moment. But it falls so flat because he is literally the most generic hero on the planet.

This is a continuation of the new Dr. Fate’s original story. Wotan has taken Jay’s mother hostage, forcing him and Khalid to enter the Tower of Fate pursuit of Nabu’s helmet. There’s a big nasty in there that Jay has to keep busy while Khalid goes after the helmet. That’s the story in a nutshell. It’s a sound plot for an issue. Nothing wrong there. But James Robinson tries to squeeze more out of it than is actually there.

It’s easy to see what he’s going for. Imagine it like a movie or television show. Dramatic hero music is playing as Jay struggles to survive against a monster that outclasses him as we cut to clips of his mother and Khalid heaping praise on him. That’s what this is trying to be. It’s just not there, though. The dramatic weight hasn’t been built up. We’re not new. We know there’s no chance the Great Beast is actually going to do anything to Jay. It’s just a random monster fight. It’s not some valiant last stand, and of course someone with super speed can keep it busy long enough for Khalid to get to the helmet. But Robinson tries to push it to a dramatic level that isn’t earned. Despite what the Great Beast looks like, this isn’t Gandalf standing up to the balrog.

To even come close to pulling off something like this, it would really have to be carried by the dialogue. Unfortunately, this issue’s dialogue is not up to par. The praise for Jay just reads as artificial. You can’t sell me on the idea that Khalid, who spends time with the badassness that is Hawkgirl, is going to be so blown away by Jay’s willingness to try to fight the big monster. And from there, the dialogue really starts to cross the border into hammed-up overdramatic territory. Robinson just tries much too hard to give Jay this big hero moment.

Wotan gets a nice little origin story in the mix of all this too. The reincarnation thing works well, especially since it’s not like either Hawkman or Hawkgirl are using it anymore. It’s a nice touch to include the detail that Wotan’s not always the same gender when reincarnated too. 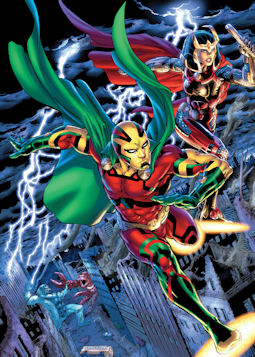 I like the redesign of Dr. Fate. It’s a good update on the look that keeps all the important qualities. It makes sense for his look to be a bit ornate with all the gold pieces and everything, and I think it stops short of being excessive. I’d definitely rank it as one of the better Earth 2 looks.

The story briefly checks in with Steppenwolf, as I mentioned. It’s mostly to justified the WTF cover with Mr. Miracle. There’s not much to it. Mr. Miracle is around, and Steppenwolf sends Fury after him. So really, all the information on this plot point is right there on the cover. I would’ve liked their scene to be longer so we could learn more about Fury. I hear Robinson and DC are saying Fury isn’t Donna Troy. Even though she obviously is. Or was when initially conceived. Come on. Look at her. It’s Donna. Seriously, what else is DC going to do with the character? Given the state of Titans on the main Earth, her best hope is to be Fury on Earth 2.

I really can’t say that the appearance of Mr. Miracle and Big Barda does anything for me. I tend to like my New Gods stuff in small doses, since by and large, it’s so rarely done well. We’ll see where Robinson takes it. I also have to admit to hoping for a Shilo Norman swerve.

The continuing origin of Earth 2’s Dr. Fate struggles with the forces melodrama of Jay Garrick’s big hero moment, and the WTF promised appearance of Mr. Miracle really isn’t anything more than you already get on the cover. Actually, the cover also undermines Khalid’s transformation into Dr. Fate as well, since you already get to see it before opening the book. This really isn’t a strong chapter of the story.