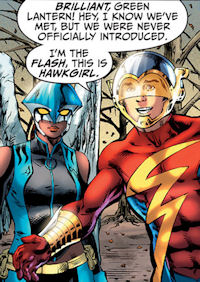 It’s the conclusion to the battle against Grundy and the Grey. The heroes -- or Wonders as they are called on this Earth -- have come together in a crisis, and when the threat is finally defeated, the predictable thing does not happen. The heroes breaks apart more quickly than they came together. And you know what? That’s a bit more refreshing than the alternative.

Also, it’s not like this book is titled Justice Society.

I’ve given Earth 2 a hard time for opening with a story with such obvious ties to the current Rotworld story going on in Animal Man and Swamp Thing. I do still think it would have been better to save this until some time after all the Rotworld stuff has quieted down rather than sharing the same stage, but what’s done has been done. Thankfully, James Robinson doesn’t really dwell on the parallels much at all. Yes, the Grey is the equivalent of the Rot. Moving on. Grundy is defeated.

The method of Grundy’s defeat is something I really appreciate, because it doesn’t involve some mystical deus ex machina being introduced to deal with him. It’s actually a logical end to the fight, and one not so obvious that you’d think the heroes are stupid for not immediately jumping to.

Like I said, it’s refreshing that this doesn’t end with a cliched “Avengers Assemble” moment with our heroes joining hands and banding together to protect the world. After all, what’s the rush? This isn’t really a team book. It’s more of an ensemble cast. It’s about Earth 2 and those who populate it. So Robinson makes a good decision by not forcing the Wonders together into a team right away. It’s not like Atom would turn his back on the military this quickly. It’s not like Green Lantern would be ready to join up with strangers after the trauma he has just endured. It’s not like I can blame anyone for not wanting to be around Flash.

Yeah, I still hate the new Jay Garrick. He’s an awful character. I get that he’s supposed to be the new guy. The average young guy granted powers who will eventually grow into the role. That’s the problem. I hate seen this character a million freaking times already. It’s generic now, and there is not even a hint of an interesting twist on that concept in this new take on Flash. Nothing. And he sticks out like an annoyingly sore thumb because he’s part of a pretty great cast. The other stars of this book are fantastic. I’d go as far as to say Earth 2 is the home of the best New 52 revamps. That is, until you get to the black hole of interesting and refreshing ideas that is the new Jay Garrick.

These are things I never thought I would say about a Flash outside of Barry Allen. We are in the dark times.

Also, I don’t think I like this World Council organization. Because speaking of generic cliches, they’re coming off as just another faceless and shady government body. I get that vigilante fiction like this requires that the authorities be incompetent or ineffective in some way to give heroes a valid reason to do it on their own, but I’ve grown pretty tired of of this particular tactic. Didn’t we just see this exact thing in the Avengers movie too?

Nicola Scott’s art remains one of Earth 2’s strengths. I really enjoy her takes on Atom and Hawkgirl, and that has me looking forward to future Earth 2 characters rolling out. I’ve gotten used to Green Lantern’s new look, though it remains a bit dull. No hope on the horizon for Flash’s look, though. Still, I can’t wait to see the new Wildcat, Hourman or whoever else will be showing up.

Despite some criticisms, I still find Earth 2 to be one of the New 52’s more refreshing titles. It is trying to be new and inventive, and it’s doing so without making anything totally unrecognizable from what we had before. I’m glad the Grundy story has been brought to a quick end. It didn’t overstay its welcome. Now, Earth 2 can move on with developing this new world.