Eastbound & Down is one the few shows that can have its worst episode and that episode still be good enough to receive such a high score. Chapter 13 does have several laughs, but overall feels unnecessary and a bit uneven. Last week’s episode ended the season on a perfect note. It was nice to see Kenny back in his hometown, but he seemed like his old self again throughout most of the episode. Of course, one of the many joys of watching Kenny Powers is seeing his exaggerated and outlandish behavior, but after the self-realization he made in Mexico, it seems like he would have grown past marching into a cafeteria, standing on the table, and yelling at kids. That was a funny scene, but it felt like season one rather than season two.

That’s the main problem with this episode. Season one was great, but Kenny isn’t supposed to be that person anymore. One of the few things that does seem to transition from the earlier parts of this season is the Stevie/Kenny relationship. Throughout this episode Kenny treated him like a friend instead of a puppy that just crapped on the carpet. From their multiple goodbyes to his marriage advice to Stevie, they have definitely taken on a new dynamic. Kenny interrupting his niece’s birthday party, who he keeps forgetting exists, was an ironically nice moment. Even though no one in the family is hilarious, they definitely help ground the show in reality. It is a bit strange that everyone thought Kenny was in Tampa during his time away. Perhaps his family knew things went south with the deal and they were trying to protect his pride, but everyone else legitimately seemed to think he was playing baseball… I guess they aren’t fans of the game. 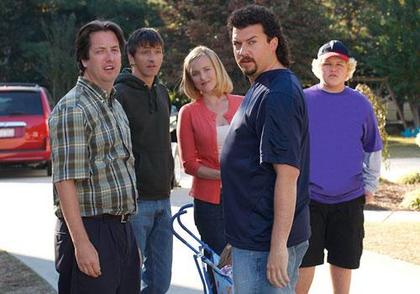 After finally getting back to an American toilet, Kenny quickly looks for April and finds her… pregnant. Since she seems to be dating her real estate partner, Kenny assumes it is his child, which leads to a great freak out by him. It was obviously ridiculous for Kenny to think April would wait for him considering he ditched her at a gas station. Kenny does sink into a little bit of a depression, but fortunately, it wasn’t too serious, he only shot pool and did cocaine. That isn’t terrible considering who we are talking about. The conversation at the bar between Kenny, Clegg, and Tracy was probably the funniest scene of the episode. Tracy is the epitome of disgusting and her talking about her yeast infection after being on screen for about six seconds doesn’t make it seem like she’s going to change anytime soon.

Kenny’s Hail Mary play to get April back was to give her all of his audio logs, which actually worked. This show is dysfunctional enough to have her pregnant with someone else’s baby while dating Kenny, but it was nice to hear that it was his. Even though April isn’t his “sugar tits” yet, it definitely seems like things could be headed that way. After the writers find a good mixture on how to allow Kenny to be crazy, but still be a matured version of himself, then their very minor problems will be out of the way. With April and Kenny now bonded for life with a child, seeing Kenny juggle his career, parenthood, and a probable relationship with her will be very interesting to watch. The writers also have the challenge of turning April into a fully dimensional character. Really, she has just been the hot chick with a weird voice that Kenny likes and not much more than that. Between the living sexpot Vida and the living zombie that is Tracy, the writers can definitely add flair to women, but hopefully they can add depth too. Season two ends on a high note for Kenny and it has laid some very nice groundwork for what we might see in season three.