It doesn’t take long to reach one of the pivotal moments you’re sure to experience while playing Skyrim: that instant when you begin to get an inkling of just how much content is crammed into the wintry Nord province.  Within minutes of surviving the harrowing opening sequence, you’ll be confronted with a vast landscape filled to the brim with intrigue, conflict, and a seemingly endless cast of characters that all need your assistance.  Whether you’re questing for the Jarl of one of Skyrim’s nine Holds, picking the lock of an affluent home to steal an item for the Thieves Guild, or crouching behind an outcropping of rock to evade the breath of a dragon somewhere in the wilderness, you’ll never find yourself wanting for things to do.  Even excluding the game’s main quest and the various faction quests, the amount of tasks you’ll find yourself faced with is staggering.

Of course, this has always been true of the Elder Scrolls series.  Yet Skyrim offers perhaps more than any other game in the series, rarely wasting an opportunity to provide the player with incentive to scale every mountain and walk every canyon floor.  Exploration for its own sake also has its own rewards, leading the player to locations and quests that might’ve otherwise gone unnoticed.  Inevitably, you’ll find yourself ignoring the growing number of quests in your journal in order to avoid being overwhelmed.  The choices you make will shape not only your character’s destiny, but will also define your character’s developing abilities.  Bethesda has done away with the practice of creating or choosing a class, instead allowing you to advance your skills simply by using them.  If you decide early on in the game to join the Dark Brotherhood and Thieves Guild, by the time you’ve completed the quests for those factions you’ll likely have become a standard rogue.  Skills are not divided into categories or ranks; any one of them can be developed and will contribute to the leveling process. 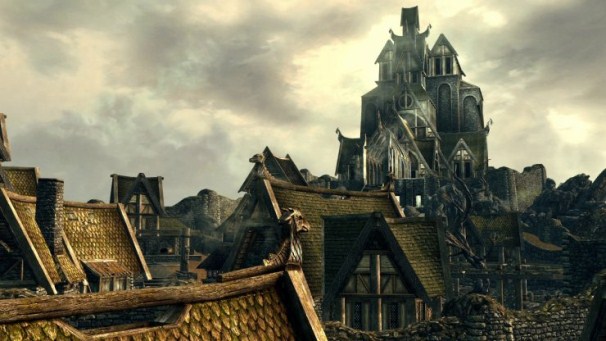 As your character increases in level, you’ll be rewarded with points to activate Perks.  These are improvements and additional abilities that can be unlocked from the various skills.  If you want to craft a suit of Glass armor, you’ll need to invest some of those points in the Smithing skill.  Likewise, if you want your Fire magic to cause as much damage as possible, you’ll need to spend a few points in Destruction.  This method of character growth certainly works for a game that rewards your character based on how you play, as it provides a compass to guide you through the endless list of quests you’ve signed up for. Generally speaking, the leveling process has been streamlined from previous games.  Instead of allotting points to Strength or Intelligence, you’ll be given a choice between Health, Stamina, and Magicka.  The whole process is unobtrusive, while still providing decisions to make at each stage.

Combat has seen some improvements as well, allowing you to dual wield weapons and spells.  Any combination of them can be assigned to the left or right triggers.  Wielding the same spell in both hands will increase its intensity, while additional benefits can be unlocked through Perks.  Sword and shield will provide a sturdy defense, while two blades will inflict more damage.  You’ll need to find a combination that works for your character, as the frigid landscape is filled with opponents of all sizes.  Giants roam the tundra with herds of mammoths, saber cats hide in the mountain passes, packs of wolves converge from all directions.  Dragons can also be found, waiting atop a mountain or circling above one of Skyrim’s towns.  They provide a relief from the more mundane encounters, and offer rewards in the form of dragon souls and loot.  Dragon souls are used to unlock Shouts, the mystical power possessed by the Dragonborn.  Each Shout acts as a spell, with effects varying from an inhuman burst of speed to the ability to become ethereal.  Rather than draining Magicka, these abilities have a cooldown period. 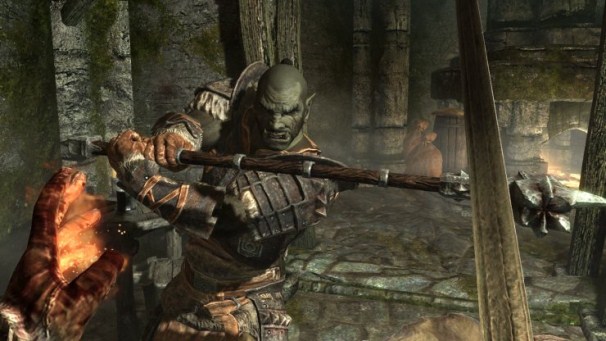 On a visual level, the land of Skyrim is often impressive, providing a beautifully detailed backdrop of waterfalls, towering mountains, frostbitten ruins, and alpine forests.  Each town has its own theme, and its own mysteries to unravel.  As you scale mountains and the elevation increases, the air becomes crowded with falling snow and gales of wind send ice crystals scattering.   Dungeons, accused of being a bit too formulaic in Oblivion, are often tied into the story and varied enough that it won’t become a chore to slog through them.  Items and equipment, fully viewable in the inventory menu, are well crafted and often visually striking.  The interface continues the minimalist theme that Bethesda applied to some areas of the game, proving simple to navigate.  Any item or ability can be added to the Favorites menu, which can be invoked at any time by pressing up on the d-pad.  This definitely reduces some of the tedious back and forth of changing equipment or quaffing potions.

Skyrim’s soundtrack leaves little to be desired musically.  The sweeping themes that sound out as you trek through the world only add to the sense of adventure, and a few of the tracks are sure to evoke some nostalgia in fans of Morrowind.  Also, the ambient sounds serve their function well, accompanying the rugged images with sounds of stirring winds, flowing water, and wolves howling off in the distance.  The voice acting is quite good in many instances, while on par with Oblivion in others. 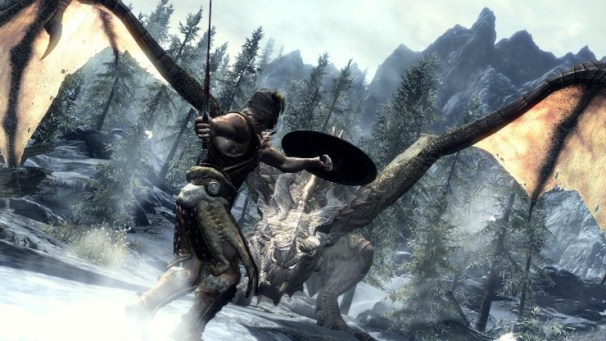 The sheer amount of content this game offers makes it difficult to encapsulate within a review.  There are so many quests and tasks to find in Skyrim’s multitude of locations that you’ll think twice before talking to every NPC in town.  If you’re in the market for a game that will absorb your time mercilessly, Skyrim is easily worthy of consideration.  It may very well be the king of such games.   Ultimately, the changes made to the mechanics work well within the context of the game, making the subtractions seem justified.  There are some flaws within the game’s gorgeous presentation on the 360, as shadows tend to flicker and can be blocky, while lots of action on the screen can put a dent in the frame rate.  Nonetheless, you’d be hard pressed to find another game on the 360 with such stunning visuals.  You will likely run into bugs and glitches here and there, but none catastrophic.  In many aspects, Skyrim is a superb entry in the series and is the finest example thus far of Bethesda’s design principles.