By: Justin Moody | TV Reviews | August 31, 2010
To anyone who has been a fan of Entourage since its inception, please join me in asking, "What's up with Vince?!!" He's been spending the entire season attempting to prove his machismo - first with the 'daring' car stunt in episode one and now with his newfound cocaine habit and triple-x love interest.

Bringing the smug and just downright obnoxious, opportunistic Scott Lavin (played brilliantly by Scott Caan) into this life was a horrible maneuver for Vinny Chase.  The little prick Lavin has been able to shimmy his way into Vince's inner circle and has caused the star to develop a more intense drug problem. Of course E came to the rescue though and warned Scott that there's only room for one pint-sized manager in the movie star's life; that role belonged to him.

Vince's coming of age is more of a devolution. He was never really the kind of guy who liked being tied down to one lady, especially one with as colorful a history as Sasha Grey. I do have to give him some credit though, for finally taking it upon himself to bypass his agent and manager to handle his own meetings. His reasoning was admirable; the first, an attempt at avoiding a drug test which he would certainly fail, the second one was a little more commendable in the form of pleading with his new director to give his seXXXy girlfriend a straight job. Sasha thanked Vince by challenging his love for her which resulted in banging him in a bathroom stall. She's toxic, Vin, that ain't love. 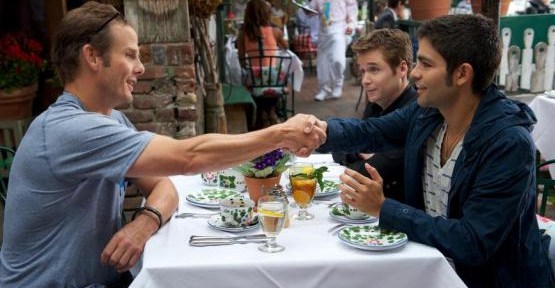 This episode also provided us with an additional story line for the demise of Ari Gold. He begins the show with a feeble attempt to atone for his mistakes (workplace harassment, child abandonment...), appeasing the orders of his legal counsel and his wife by being kinder in the office and submitting to more family time.

The plan was going rather well throughout the episode, until the Godfather-esque scene that played out during a date with Mrs. Ari. The Gold family patriarch spotted Amanda Daniels, the woman whom he blamed for releasing his office exploits to the press, and causing the current hellstorm his life has fallen into. He excused himself to the restroom, where he pulled his weapon - aka Blackberry - swiftly from a cabinet in the bathroom stall to dial Amanda with the hopes of arranging a meeting. The phone call was cut short when a waiter, at the request of Mrs. Ari, opened the bathroom door, surprised Ari, and plop (!) went the mobile into the porcelain throne.

Weaponless, Ari returned to the table with the best ammunition in his arsenal; his own mouth. Amanda then approached the Gold's table to briefly talk to Ari, who, in a plot twist, uses his own words to kill himself, his career, and his family life; the three things which he wrongfully accused Amanda of destroying, and which mattered most to him... probably in that order.

Johnny Drama is starting to wise up and take career advice from people. We've only known John to make his own decisions, however unsound and rash. Now Eric's assistant Jennie has become the Obi Wan to Drama's Luke. And honestly, who isn't excited for Johnny Bananas!?!

Turtle's get rich quick mentality continued to haunt him after a business deal for Avion with billionaire Mark Cuban goes awry and leaves the Dallas Mavericks owner thirsting to buy out the family owned tequila company. I'm certainly interested in seeing what evolves out of that.

Eric grew some balls and told Scott to fuck off. (So good I had to mention it twice.)