The Legend of Zelda: A Link to the Past has been released in Japan and Europe in 2013, but North America finally gets one of the best games of all time for only $7.99. For those who haven’t tried it out, not only is it worth it, but it can also allow you to play A Link Between Worlds and appreciate its aesthetic. If you own it for the Wii’s Virtual Console and transferred the license to your Wii U, you can upgrade it to a Wii U version for only $1.50.
Four Swords Anniversary launched for free during Nintendo’s celebration of the 25th anniversary of the Zelda franchise and pulled it back in February 2013. Now it’s back, for free again, but only for an extremely limited time. Nintendo will pull it again on February 2nd. Four Swords was a side game to the Link to the Past port on the GBA, but Nintendo redid it to take advantage of the 3DS’ wireless multiplayer capabilities. Since it’s free, it’s definitely worth downloading onto your system for kicks and giggles. 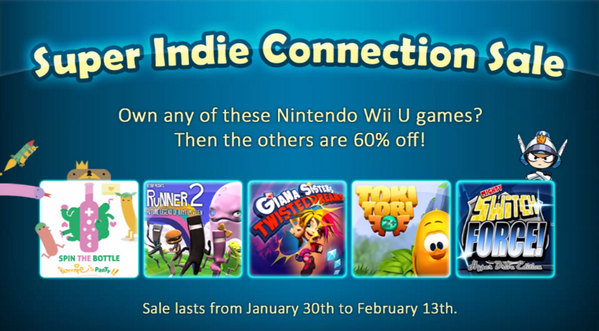 In other eShop news, Nintendo has also kicked off an Indie game promotion for Wii U where if you buy (or already own) Bit.Trip Presents… Runner 2: Future Legend of Rhythm Alien, Mighty Switch Force: Hyper Drive Edition, Toki Tori 2+, Spin the Bottle: Bumpy’s Party or Giana Sisters: Twisted Dreams, you can get the other four for 60% off. The eShop will automatically promo the other four games when you buy one at full price, or own one, so you can get four other neat games for a sizable discount. This promo lasts until February 13th.