Eureka – I’ll Be Seeing You

I’ll Be Seeing You is a mid season finale that acts to tie off loose threads before the hiatus. Carter and Allison have finally sealed the proverbial deal and Dr Grant is now involved in a seemingly global conspiracy that he appears to have founded in the 1940’s. Unfortunately the time travelling plot feels like a retread and although there are some undoubtedly significant events, their resolution is ultimately predictable and the story, convoluted.

Allison wakes up in Carters arms after there long overdue bedroom rendezvous and we see the couple acting blissfully happy and clearly in love. But as is always the case in Eureka, an impending catastrophe requires their immediate attention, in this case, the theft of the weapon by Beverly Barlowe. While the G.D. team are on the hunt for their missing weapon, Dr Grant is wrestling with Beverly’s proposition to send him back in time using a recreation of the Bridge Device. My main problem with this plot-line is that it has not been developed at all and remains extremely shallow all the way up to the episode close.  I felt more like I was watching a catch-up montage as opposed to a conspiracy unravelling. 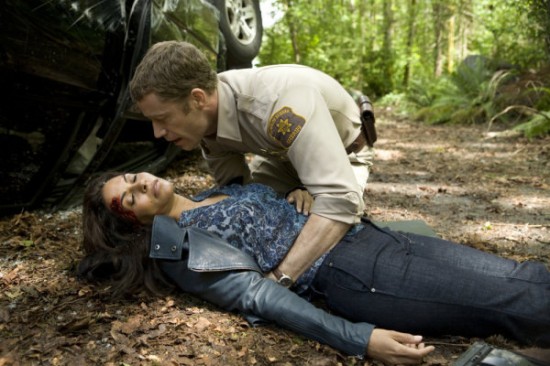 Just as the central characters realise Grant’s deception and close in on their location, the device fires up and Allison and Henry are hit by a shock wave that throws their car into the air. Here comes the shocker... Allison is killed. It’s unavoidable due to her prominence in the show, but we know that she isn’t ‘really dead in the true sense of the word and this unfortunately dilutes any suspense it should have created. Grant is about to go back in time and suddenly the rest of the episode has written itself.

Carter attacks Grant as he enters the worm hole and is transported back to 1947. They arrive at exactly the same time and location as the one covered in the season premiere and although many will see this as a nice call back to the original events, I found it repetitive. The problem with time travel is that it is a mind field of paradoxes and impossibilities and this episode failed to even acknowledge this. I will admit to being extremely pedantic, but it would have been nice for the writers to attempt to explain some of the inconsistencies.  Needless to say, disaster is averted and Allison is saved through a message left form one Carter to another.

Maybe I shouldn’t watch Eureka with a hangover, but I found this mid-season premiere to be a little lazy in its resolution of events. At no point was I in any confusion as to how the episode would conclude and having to watch a good chunk of the season premiere again was a little frustrating. But this is still the best season of Eureka yet and although my review may read like a grumpy letter of complaint, I will still be tuning in once the season continues. So in conclusion, disregard everything you’ve just read...