Each episode of Eureka’s forth season begins with the tagline “same town, big changes”. However, for the last three instalments, the purported changes have remained almost entirely on the side lines. Momstrosity shines the light firmly on these ongoing stories, whilst still having time to deliver a traditional ‘when science goes wrong’ drama, which is actually one of the most entertaining this season.

S.A.R.A.H., Carter’s trusty A.I. house, is feeling a little bit frisky this week and has her robotic eye on Deputy Andy and his new face. Unfortunately, Andy’s programming does not accommodate human emotions, so S.A. R.A.H. decides she will perform a little upgrade. Using a subroutine taken from Kevin’s school project (instead of caring for an egg, Eureka has robots), she convinces Andy to upload to her mainframe and in doing so, adjusts his programming. This entire scene was incredibly well done and the sexual connotations and innuendos where hilarious. We even get to see Andy placing his finger in the ‘wrong hole’ (Eureka has gone downtown). I was unsure of how well new actor, Kavan Smith, would be able to assume the role after the sudden switch, but his performance tonight was utterly brilliant and he has defiantly established himself as the new face of the android police officer.

S.A.R.A.H.’s manipulation of Andy’s A.I. inadvertently affects the entire G.D. system, imbuing any artificial intelligence with rather unstable emotions. This eventually results in Tiny (the bug robot seen earlier in the series) becoming a little hormonal. Although not terribly exciting, this does set up some great comedy, mostly centred around Andy, as machines begin to follow their heart’s instead of their core programming. But the major focus of the episode was the interactions between the main characters. Carter and Dr Grant become very forthright about their feelings for Allison and the sparring between them and the tension this constructs is constantly entertaining. Kevin is made painfully aware of Carter’s intentions and although initially reacts with hostility, eventually explains that his Mother could definitely do worse. This acts as a kind of permission granting, that will hopefully give Cater a much needed kick up the backside. 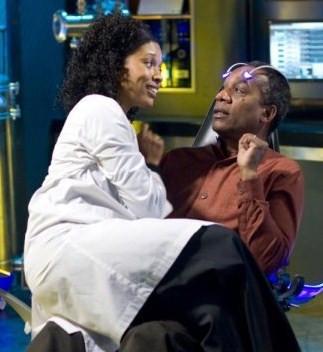 The other main development lies in Henry’s confession to Grace (the wife he never had) of his arrival in an alternate reality. I was under the impression that this secret might never be revealed to the inhabitants of ‘new’ Eureka, but Henry’s feelings for Grace appear to have made the guilt too much to bear. Unfortunately, Grace feels understandably betrayed and is distraught to discover that ‘her’ Henry no longer exists. This was a welcome adjustment to the plot, which had become somewhat stagnant since they arrived in the alternate reality and it is great to see Henry with a love interest after his depression in previous seasons.

A superb episode that manages to provide excitement, comedy and intrigue without compromising on the traditional Eureka formula. The interactions between Carter and Grant are excellent and James Callis manages to provide an excellent supporting character that has, at last, put some fire in the belly of our resident Sherriff.  Henry no longer has to fake any feelings for his new wife but this ironically leads to their separation. Both seem receptive to developing a relationship however, so there are plenty of possibilities there. I still find Kevin a little too outgoing and his change appears to be a little extreme, but his presence does add another layer to the often shallow relationship between Carter and Allison. Hopefully the writers will acknowledge the success of this episode and maintain its direction because it was a pleasure to watch from start to finish.