Eureka – The Story of O2

Colin Ferguson steps in this week as guest director and Eureka reverts to its tried and true formula that although entertaining feels a little too familiar and lacks the excitement of earlier episodes.

I’m not a great fan of the kind of job swapping that seems to go on a lot in the entertainment industry with rappers becoming actors and actors becoming pop stars. I think I’d make a great Quantum Physicist but the difference is, I’m not allowed to start pressing buttons at CERN. Needless to say, The Story of O2 is a real cookie cutter episode that with the exception of a few superficial interactions, could fit comfortably within any of the previous seasons. 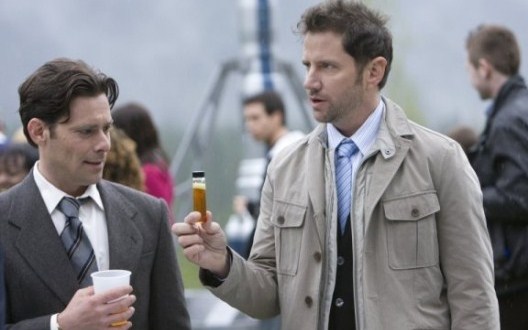 Nurse, I have that sample you asked for

Deputy Andy has been recast due to Ty Olsson’s movie commitments. The writer’s decided to go with the predictable cover-story of giving robot Andy a new face after his most recent combustive accident. It is convenient and does work as you’d expect however, it is still extremely transparent. The new actor embodies the character in much the same way and by the end of the episode has solidified his position as a member of the regular cast.

The central story of the episode is one we’ve seen several times before. A yearly event revolving around some kind of tech-competition (in this case, a rocket race to the moon and back) but unsurprisingly, some outside meddling causes a freak reaction that may result in Eureka’s destruction. The only variation to the formula is that Jack is not around to state the obvious and thereby save the day. He is visiting Zoe and her new hair at university and has his own little adventure with an invisible cat. So instead of Jack saving the day as is traditional, Allison’s 13 year old son Kevin is the one to rescue Eureka from imminent destruction. It does make you wonder about the competence of everyone else at G.D., when the solution turns out to be popping a few balloons in the sky. 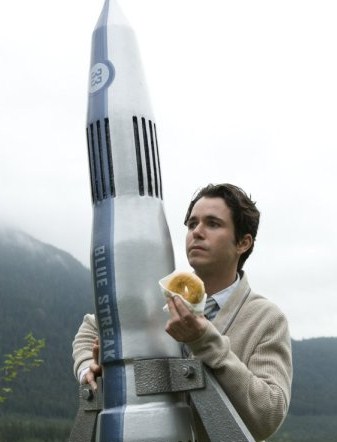 Jo is still trying to force the emergence of the Zane she was in love with in the original reality. It’s a little cutesy but the childish character that he portrays in this universe is irritating and a little unconvincing, so I was pleased to see him mature over the course of the episode. Dr Grant still has no comfortable role within the show and has even lost his sarcastic cocky persona, leaving him as little more than a concerned onlooker. This is a great waste of James Callis and needs to be rectified immediately to avoid rendering him obsolete

The absolute low point of this week’s instalment is unarguable the inclusion of a scientist played by uncomedic comedian, Jamie Kennedy. He spends half the episode performing his only joke; using urban lingo in silly voices. This hasn’t been funny for the 10 years or so he’s been doing it and the notion that a scientific genius would be acting like a 13 year old from the 90’s, is simply unfathomable. I spent much of his screen time audibly cringing and biting down on my knuckle; it was genuinely painful to watch.

I am aware that I have been extremely critical of an episode which is not actually entirely bad. The reason for this being, that it felt lazy and unnecessary, like a student handing in a year old essay which they have merely changed the date and title. The dynamic has been shifted in Eureka and it no longer feels comfortable to retread these tired scenarios again. The only way these catastrophic events can ever be tense and exciting, is if we are given some explanation as to how they work and what exactly they are. To simply proclaim that there exists some magic goo that can teraform entire planets by creating O2 out of thin air (pun notwithstanding) has about as much scientific grounding as Scientology.

Hopefully this was just a classic filler episode whilst everyone vacations in Italy. If not, it looks like we may be heading towards Eureka’s final season, as there are only so many gadgets that I can watch nearly destroying towns before I start to lose interest.