Everquest Next: What Have We Learned?

This weekend was a momentous weekend in my gaming career. I sat teetered on the edge of my seat during my lunch break at work hoping my internet would allow me to stream via Twitch in a decent resolution (I ended up with a happy 720p+) and among over 30,000+ other viewers around the world we had all been awaiting a game that has been in the shadows since it's first mention in the EverQuest 10th Anniversary Book, which was released in 2009. I had been a huge Everquest fan and from 2003 to 2008, I can honestly say I built some absolutely amazing friendships and have nostalgic memories pouring into my brain as I write this. The original Everquest defined the MMORPG genre and today I'm happy to tell you that a new genre breaking game in the Everquest series has been officially announced and is hoping to break away from the "same old, same old" tag that many MMOs are being labelled with now days. Sony Online Entertainment (SOE) delivered the news via a live stream keynote and Everquest: Next is a name you will be hearing a lot about in the forthcoming months.

When you think back through time to the building blocks of the MMORPG genre with games such as Ultima Online, Lineage, Terra, etc. all the way through to the current gen MMOs like Rift, Star Wars: The Old Republic, and Guild Wars II, one has dominated. In the earlier days that was Everquest, but we have to admit that World of Warcraft is the behemoth of the genre and although a host of paid for and free to play clones have come and gone, WoW is the one to beat. Everquest: Next is here to change that and SOE design director David Georgeson explains, "EverQuest is another point in the triangle," he says. "We're creating a triangle; it's not just a line anymore." What I think he is saying is that EverQuest Next definitely isn't going to be as linear as games like World of Warcraft, but it's also not as wide and diverse as EVE Online either. Everquest: Next is a game where players shape the world together, a sort of massively multiplayer Minecraft with all the fantasy trimmings blended nicely into a world with no boundaries."


Even the name Everquest: Next evokes different connotations dependent on your views, but I read between the lines as this game being the next step in gaming that does not follow your traditional MMO according to Georgeson. The original concept behind EverQuest, which was fresh back in 1998, has been done to death. It is time for something new. what we need to deliver with EverQuest Next is something really original, so what we did was tear it down to the bedrock,” Georgeson says. “We pick what we liked, what we didn't like, and we came up with a list of holy grails that we as designers had always wanted to do, but never had the time or the intestinal fortitude to try before."

The game is going to bring whole new concepts and ideas to the table. Players will have the power to alter the surroundings with crafting and doing damage to enemies will affect the architecture in the circumference of the player, dependent on the move performed.  This could be the first time we see player-created and controlled cities done right and could take heed from EVE Online which has given complete control of the galaxy over to its players. Mostly though the online worlds remain static until the development team releases a new next batch of content. What's great is that every player can work together to build a permanent settlement and shape the surroundings to their design. SOE really emphasized that it isn't their game. It is "our game." In EverQuest Next, a rallying call with periodically go out across the entire server and SOE have explained that every player can work together to build a permanent settlement and along the way there may be subquests or monster attacks, and construction may be delayed. But when it is all finished, it is very much permanent. You can also experience attacks from mobs and NPCs and choose whether to aid them in attacking the town or work with other players to protect it. This is a great concept which I think will really take off and make the player feel more immersed in the game.


The emphasis on world control and building is also apparent in dungeons. If you teleport away from an enemy attack, and you'll leave a little damage in the ground and around the area if touched. If you're an Earth Wizard for example you can raise ice style barriers out of any part of the ground, or create sinkholes to trap monsters in a frenzied AOE style attack. If a large party of enemies crosses a bridge then this wizards spell can knock out the bridge and send these enemies plunging into a newly made ground cave. Of course, the bridge will be gone as well, which will open up a new mission in how the players will all get across the expanse.

This brings us nicely onto a new term which SOE has announced, which is "Voxels." So what are voxels you ask? Well voxels are the new Minecraft-esque building blocks in EverQuest Next that allow players to design the surrounding universe. These can be farmed and destroyed. Players will however occasionally be prevented from destroying things and Georgeson says, "Player cities would become player parking lots." Monsters and NPC's however will show up to wreak havoc and are able to do damage to player settlements. Larger and more powerful enemies will do even more damage showing the need for players to work together and fend off the foes whilst they rebuild their broken settlement.


SOE explained that over periods of time, individual servers in EverQuest Next will actually become their own "worlds." If you jump onto random server there will be a player built settlement but jump onto another and there may be a field where nobody has created their own world. You will be able to dig down deep into the ground and find different materials and discover artifacts and such. SOE also hinted at random earthquakes to open up new possibilities in different areas. EverQuest Next is designed to be different. Many of the quests will be dynamic and the large variety of monsters will have likes, dislikes, and real motivations for their actions. If you take the race of Orcs, for example, They love gold, and will go anywhere they can get it, which could result in a battle for territory as players fight to save their pre-built personal city. Destroying the attack of a certain type of monsters could cause an uprising in their clan prompting them to attack again or if they feel overwhelmed they may move off. This shows the level of detail of the combat possibilities. No longer will you need to walk around looking for ten wild boars to kill. The monsters in this game have their own objectives and will stop at nothing to achieve them. "We want people to develop a long, detailed history of their character," Georgeson says, "So that when they tell others that story, they actually care, as opposed to, 'Yeah, yeah, I did that quest.'" 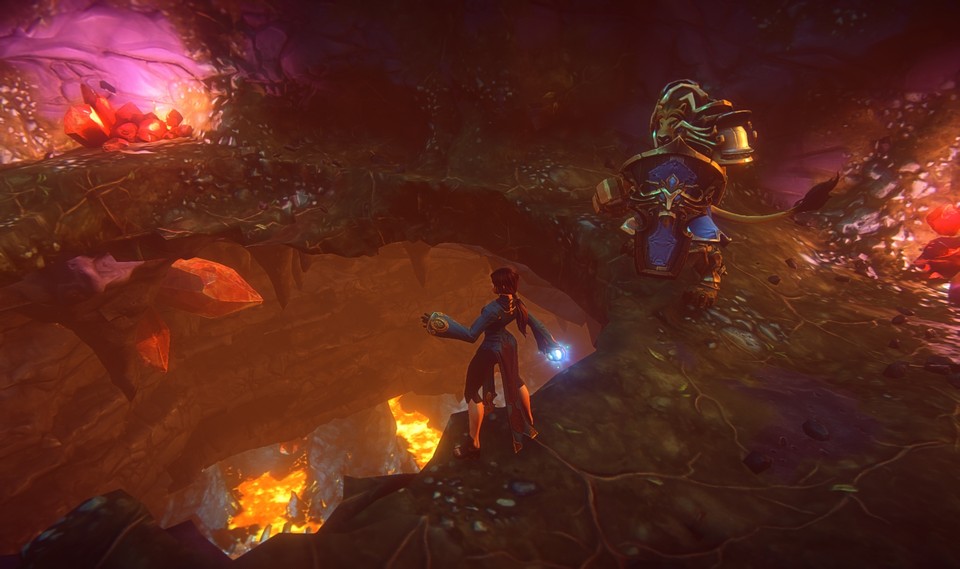 Crafting will be one of the most important aspects of the EverQuest Next world as it has been in the previous two installments. Many of the familiar locations from the past games will also be present but much better graphics which is something I'm really looking forward to. I can't wait to relive some of the moments I had before. SOE is also encouraging players to help them build up the world of EverQuest Next by releasing their internal tool set to the public. Fans can then build their own ideas into the game and developers will then take the top rated structures and see if they are good enough to be put into the game. This is another great example of SOE following the "our game" platform.


EverQuest Next has been steeped in mystery for the past four years and finally SOE has cut the red tape. I was personally dissapointed that I didn't see more actual gameplay footage or any information on what the UI is going to be like, but SOE have obviously got some next level ideas they're working on and if they progress then they may be onto a winning formula. World of Warcraft is losing subs by the bucket load and there is no clear prince to take over the throne. I really hope Everquest Next delivers as this could take its place as the dominant MMO of the next generation. As soon as we have any more new be sure that, Entertainment Fuse will be on the case.

SOE are taking BETA applications on the Official EQ Site and you can rewatch the entire keynote below.