Everything You Need To Know About The History of Saints Row

In the predawn darkness between the release of GTA: San Andreas and GTA: IV, fans of open-world mayhem simulators found themselves in a bind.  A new generation of consoles was upon us, and yet the genre which contributed vastly to the success of Sony’s Playstation 2 and the coffers of Rockstar North had nothing to offer those who had upgraded.  There was simply a void.  For those gamers craving high-speed police pursuits through fictional cities, mowing down groups of pedestrians, and taking to the skies in stolen military hardware, options were limited.  Most had no other alternative than to turn back to San Andreas and patiently await Rockstar’s next entry in the series.  That’s when Volition, known primarily for their work on the Red Faction series, stepped into the fray with their answer to the deficiency: Saints Row.

Such was the desire to see this genre brought to life on newer consoles, that the release of the Saints Row demo on the Xbox Live Marketplace shattered download records.  In its first week, it approached 400,000 in number of times downloaded.  Obviously Volition had made the right choice in terms of when to release the game and what audience to court, but how did the actual game fare itself? 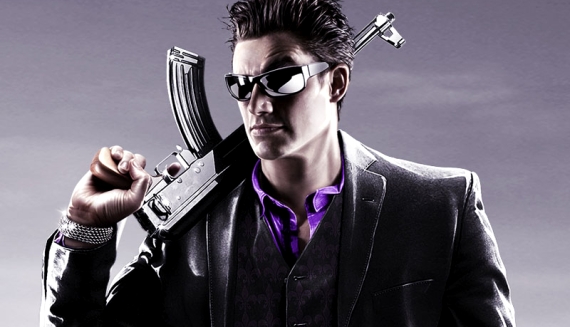 At the end of August 2006, Saints Row was released officially on the Xbox 360.  It hastily achieved commercial success, turning out over 1 million copies by the end of November of that same year.  This might’ve been dismissed as fans responding to the dearth of GTA-like games available on newer consoles.  There were plenty of last-gen GTA clones on the market, but for those looking to leave the past behind and embrace the new generation, Saints Row was the only choice.  "Better than nothing" is a long way from justified success. 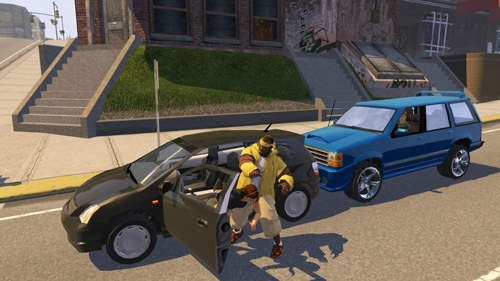 To marginalize Saints Row in this way would be unwarranted, however.  It is greater than the sum of its parts.  As we approach the release of the third game in the series, which is again shaping up to be a commercial and critical victory for Volition, the evidence seems clear that Saints Row has risen above its humble origins as a me-too GTA imitation.  Make no bones about it, playing through Saints Row makes it painfully obvious that its creators were not “inspired” or “influenced” by GTA but rather swiped the blueprints altogether and built their own version of the same structure.

You can call Saints Row a knockoff, you can rail against the apparent lack of creativity and cold business rationale that led Volition to essentially rebuild GTA in their own image.  Sure, you can say all those things and be right.  Many did and still do.  But you’d be leaving a lot of important points unstated.

First and foremost, Saints Row is not a mere copy of GTA, but also brings significant improvements to the table.  Instead of being saddled with a premade main character, Saints Row invites you to create your own.  Following that freedom of choice is a multitude of customization options that allow you to refine your vision of what the protagonist should be even further.  In that respect, it takes what San Andreas offered to a higher level.

Story missions are a little harder to appreciate.  They have their moments, and adopt all of the same cinematic storytelling techniques that GTA offered, but aren’t as adept at tickling the funnybone unless middle-school grade humor is your cup of tea.  The level of profanity, oddly enough, does begin to seem excessive.  You might be shocked at how many f-bombs are dropped in close proximity, even if you’ve just finished watching Goodfellas and Casino back to back.  The story serves its purpose, and hits the right mixture of eccentricity and idiocy on more than one occasion, but it seems to this day that Rockstar has a knack for this that Volition can’t quite match.

One gameplay element that has always generated complaints in the GTA series has been the controls, and Volition followed their pattern of recreating but also improving with the controls in Saints Row.  Instead of having the action interrupted by spastic lock-on controls, the gunplay and movement control in general feels a lot less restricted and smoother. 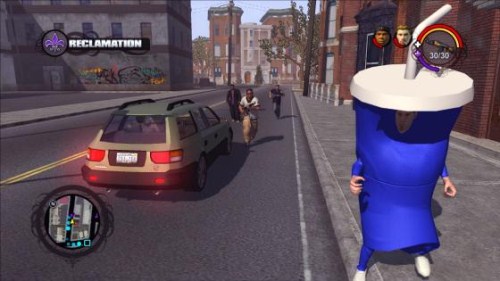 Saints Row was built on the Havok engine, shared by its cousin Red Faction: Guerilla, and as you play through the game you’ll notice almost immediately that it doesn’t feel like GTA in terms of raw game mechanics.  Many of the activities you can take on in Saints Row are designed to show off the engine’s abilities.  For instance, as you guide your character into speeding traffic deliberately in hopes of sustaining horrific injuries and huge insurance payouts, what seems like a gentle tap from an oncoming vehicle literally launches you hundreds of feet into the air.  This is where Saints Row really shines and makes a genuine effort to emerge from beneath GTA’s towering shadow.  Right off the bat, only having just learned how to play the game, you’ll find yourself bombarded with things to do.  In addition, you’ll find no arbitrary barriers to block access to sections of Stilwater, Michigan, the game’s fictional setting.  You have access to the entire map, and all the tools you need to keep yourself occupied for hours on end.

The aforementioned Insurance Fraud activity is insanely fun, but it’s not alone.  You can also spend your time escorting prostitutes while they ply their trade and you dodge trouble, or track down targets to assassinate, or abuse the populace of Stilwater under the color of law while a cameraman captures the moment for reality TV.  Each time you complete one of these activities you earn cash, respect, and the opportunity to try again with an increased level of challenge.  Respect is vital because you need it to play the story missions, where you’ll find yourself competing against rival gangs as a member of the 3rd Street Saints.  In addition to the story that leads you and your cohorts inexorably toward dominating Stilwater, you can occasionally find gang Strongholds to assault and takeover.

Volition also filled the void of cooperative and competitive play with Saints Row.  Through system link or Xbox Live, players could participate in a respectable variety of online missions.  Like many other aspects of Saints Row, these improvements and additions made it abundantly clear that this was more than a simple GTA clone.  Much of what Rockstar did, Volition did better.  The end result not only garnered critical acclaim, but more importantly, turned out to be good, old-fashioned fun. 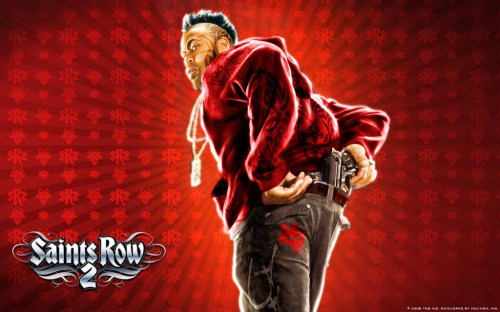 The sequel to Saints Row was already in development by the time the original was released.  As development moved along and Saints Row turned into the breakout success that Volition had been hoping for, the developers saw an opportunity to improve on their own vision of open-world mayhem instead of trying to fill GTA’s footprint.  Saints Row was a contender in its own right now, no longer burdened by the legacy of its predecessors.

With Saints Row 2, Volition built on the niche they’d carved out in the open-world genre by adding more.  More stuff to do, more polish, more insanity.  While Rockstar traipsed off into a darker, more realistic direction with the GTA series, Volition embraced the violent absurdity of Saints Row and sought to forge a better experience for the growing fanbase.  Players were given more freedom with character creation, even though the main character from the original Saints Row returned in this sequel after having survived the first game’s explosive conclusion.

Within moments of having escaped the prison island where your character awakes from a five-year coma, you can proceed directly to spraying raw sewage over homes and construction sites to sabotage property values for fun and profit.  Again, as with the original, you won’t find walls to impede your progress, everything the game has to offer is presented to you upfront.  I’ve lost track of how many times I’ve loaded up Saints Row 2 with the intention of completing story missions, only to find I’ve wasted hours bouncing from one activity to another.  The side missions certainly felt a tad more addictive than they did in the first game, if only because Saints Row 2 goes out of its way to take nothing seriously.

Added improvements included a checkpoint system to make failures a little less frustrating (many such failures are beyond your control), a cruise control mechanic, and refinements to online play.  The city of Stilwater, rearranged after an earthquake, shows off a level of polish and detail that puts the city’s first iteration to shame.  The story presentation also shows thoughtful improvement, with the addition of a little more wit and a little less childishness, and consistently decent voice acting. 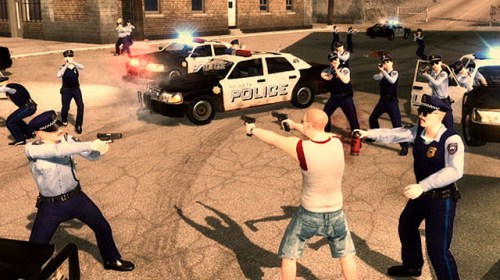 With Saints Row 2, Volition made it clear that they were capable of more than trying to steal GTA’s lunch, and that they knew what they were doing.  Both Saints Row games had their share of technical issues, and all was certainly not perfect in the state of Michigan.  Many of these flaws can be set aside, however, since it’s safe to say that most gamers ignored them in the midst of Stilwater’s all-consuming chaos and lunacy. Forgiving Volition for working off of photocopies of GTA’s playbook is easy after playing both games, since GTA only served as a foundation upon which Saints Row’s improvements and innovations were built.

By all accounts, Volition has somehow taken craziness to the next level with the third game in the series.  Having been evicted from Stilwater, the Saints now find themselves in Steelport.  Whatever adventures await the gang in Steelport will likely make the exploits of Stilwater seem pedestrian and tedious.  If the physics-defying, adrenaline-fuelled action movie vibe of the first mission preview is any indication of what lies in store, Volition has not spared any of the ridiculousness that has defined the series. 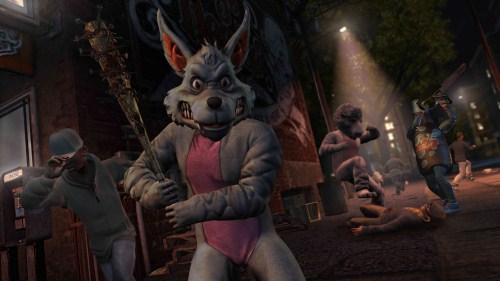 Before 2006, there was GTA and there was everything else.  Rockstar had the upper hand and it seemed as if they always would.  Though other teams made respectable efforts at offering similar experiences, nothing really compared until Volition unleashed Saints Row.  Now both series have devoted fanbases that argue incessantly on the merits of one over the other.  Back when Saints Row was just another GTA clone, that didn’t seem a likely outcome.  Though Volition initially struck gold largely by preempting GTA IV, there was never a moment where the series was put back in its place under GTA’s shadow.  People continued to play and enjoy both series.  Some grew to prefer Saints Row over GTA, and never looked back.  Where it seemed that Volition had started on the wrong foot, it looks like they had the right idea all along.