After a great set-up in Evil Ernie #1, can Evil Ernie #2 provide the carnage I’ve been longing for? There is blood and carnage, and some touching moments… which aren’t always appreciated. But Ernie does have awesome abilities, horror references, and a talking smiley face button on his side!

Ernie is back, and he’s not too happy with his dear old abusive dad. So, he’d decided to make him his 666th kill after coming back from his execution – with a talking smiley face button to provide comic relief…

The origin story in this issue continues where the last left off, and after such a great build-up that covered many years, the pacing comes to almost a standstill. Ernie needs to kill his father, but keeps finding himself distracted by trivial matters. But that doesn’t make it any less entertaining.

After an unnecessary opening.

The opening of Evil Ernie is blatantly used to get readers to cheer for Ernie… a bit too blatant because of Ernie’s stuttering and pathetic plea. But it ends on a dark note that this gruesome book doesn’t barely show, making it as dark as our minds can imagine it. I could hear young Ernie’s screams as we shift back to the present, where the bulk of the story takes place.

This opening partially fulfills my request last issue to see Ernie before his transformation and create more sympathy for him, but it wasn’t needed so soon. We see his mother die right away in the first issue, so our sympathy for Ernie is set… at least before a few more issues and a lot more bodies pile up. Guess this comic really makes me realize the “be careful what you wish for” cliché. But the flashback is only a panel over a page, so we’re not kept away from the present-day carnage for too long.

More flashbacks might not even be necessary, since later on in this issue we are given even more reason to sympathize with Ernie – and a reusable reason that isn’t so blatant. It involves one of Ernie’s many awesome powers. I love not only his physical prowess, but his ability to see people’s sins. Ernie then reacts accordingly – usually by murdering them in a gruesome way, thanks to his physical prowess. My favorite death, with Ernie playful commented on, involves a pedophile. I’d love to see this power come more into play in the future… though with this series I need to be careful what I wish for… But there is a dilemma with his powers that I like, since not only does it add suspense, but leads to a great cliffhanger.

Ernie himself acts like a big kid. He claims he’s not “evil…” yet he contradicts himself with his own dialogue, then playful goes around murdering people. It’s like he’s still that thirteen-year-old that killed 665 people. You’d think you would grow up in prison. But this confused teenager does instill sympathy, even with the misplaced attempt, and plays well against his companion Smiley. 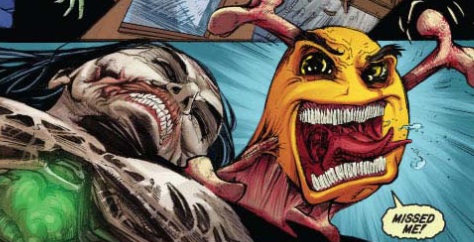 Smiley, Ernie’s talking smiley face button, is also in this issue. I don’t say “introduced” because he is just there with no real introduction or explanation to his existence. He was in the original Evil Ernie comics, so maybe writer Jesse Blaze Snider was only thinking about old fans. Hopefully, he will get the introduction he deserves in future issues. But he plays off well against Ernie with his comedic humor. But he is not just comic relief. He helps explain things to Ernie and us otherwise clueless readers. I also liked how he wasn’t as vulgar as I was imagining him to be. Again, I’ve never read the original Evil Ernie comics, so I was expecting the writers to make a smiley faced button that talks a very crude talk, because apparently cute things that cuss are supposed to be funny. And they can be, with limitations. Thankfully, Smiley is never really crude. He’s never offensive, unless you’re sensitive to pointless but harmless cussing – which of course means this is still a mature read, if not for the cussing than because of the gore, but cuss wise you could do a lot worse (the first page of Happy #1 for instance which had about a dozen curse words).

I think this might be the first time I’ve criticized a letterer, but there are multiple faults in Troy Peteri’s fonts. For one, Smiley’s dialogue is extremely small at times. This could be to stress his small size, but makes it hard to read what he is saying without a magnifying glass. Ernie’s words are also a problem. They are printed in a font that sometimes blends together making some words hard to decipher. It deserves a mention, but does not always ruin the dialogue since, for whatever reason, Ernie’s weird font choice is dropped and Smiley’s dialogue shifts between being big and small – having it make even less sense to make the dialogue small. 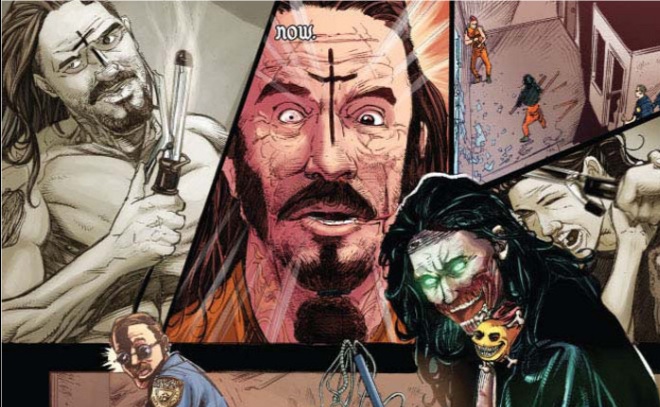 The pages drawn by Jason Craig are very chaotic. They feel cramped and it is difficult to tell - let alone enjoy - what is going on in the page. Especially the second page that jostles us into present day. Panels are cramped next to each other, with others sometimes invading them. The backgrounds are also usually bland solid color backdrops with "dreaded" speedlines.

Evil Ernie still doesn’t look like himself, a skeletal biker, but is instead a fleshy meat sac. In some panels he looks like a clown. But his design does a bit better when he is doing an Exorcist reference. He looks human, but has the flesh around his mouth exposed. I also like how his design has no midsection, save for some green shine! I wonder, if he ate food, where it would go…

These issues had a few problems which need to be worked out. I’m not a huge fan of all the artwork – it has its moments, but Ernie’s design needs to be more consistent. The lettering needs to stop listening to “bigger isn’t always better” and make Smiley’s text boxes bigger so I don’t have to squint. But overall, I had a lot of fun with this issue. It offers more than just gore, but some good dialogue between Ernie and Smiley.  We continue to root for Ernie, and the story ends at a point that makes me anxious to pick up the next issue… as long as I can see all the words!

As for which of the four money-sucking covers to choose from... I'd suggest the beautifully covered image of Ernie, Smiley and his never appearing Scythe. 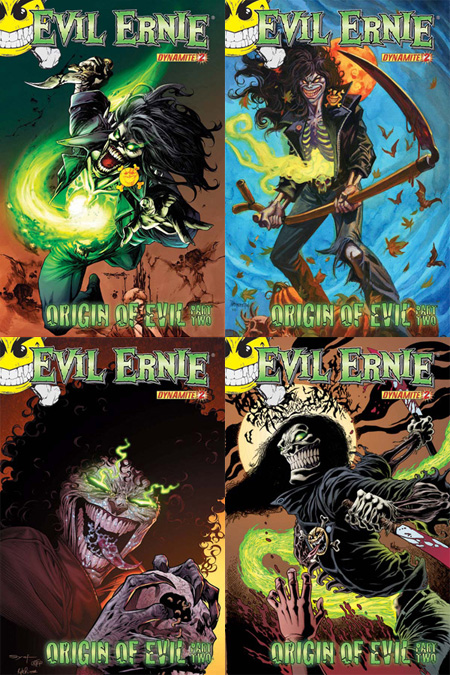