After the zero issue I was pretty interested in where this series was going and looking forward to this issue to answering that question. Unfortunately it kind of rehashes the same formula as the last issue, but does manage to be entertaining with the action even if the story kind of hangs out. Even though this is Iris’ book the story is still focused on Diane Coverdale and her executive assistant Acteia. The first few pages give a deeper look at Diane and how she came to be in charge of her late husband’s fortune 500 business.

The entire issue reads like a trap waiting to spring upon you. It’s intense at times as you never know who is going to suddenly attack Diane and frankly with the way Acteia acts, you’ll suspect everyone just as she does. As Diane enjoys a night out with an actor friend, she is yet again attacked and Acteia leaps into action. She kills one of the men instantly and then chases down the second until the police show up. The presumed danger continues as Diane is swimming in her pool as a helicopter draws near the property. Acteia discovers that it’s just the paparazzi as she points a loaded gun at them scaring them off for good. 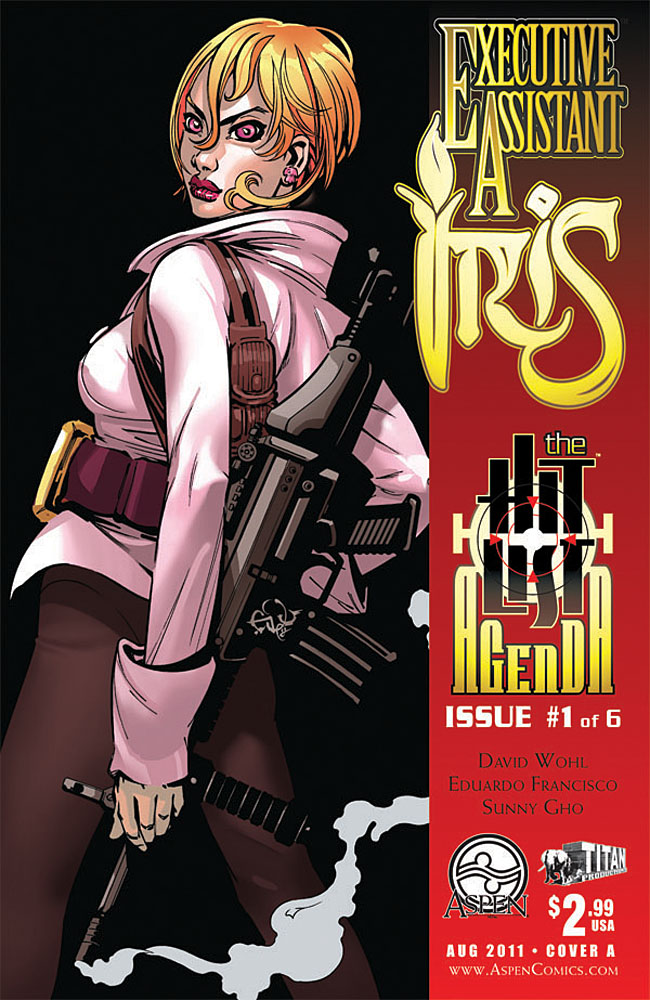 I wish this issue pushed the story forward more than it did. I feel like writer David Wohl used the same writing formula for the issue as he did in the zero issue. Granted some people may not have read the zero issue and a reintroduction is needed, but both ended in similar fashion leaving the reader to wonder what the heck is going on. Usually that’s a good thing as it brings you back for the next issue, but having read two issues that didn’t answer any questions I’m hesitant to be interested in the next issue.

The art is very inconsistent at times, especially when there is action. In one scene Acteia jumps onto a table and her already short skirt manages to become even shorter which makes her look very awkward. Really you should be seeing her underwear which isn’t a big deal in comics, but artist Eduardo Francisco tries to keep the dress covering her lady area but it just doesn’t work with the angle and posse. Eduardo also struggles with side profiles as the characters often time’s age and look very awkward.

In general the book is entertaining and the overall crossover storyline is intriguing enough to keep me reading the series and the other tie-ins that look as interesting as this series. Since this book is the flagship I hope that the story will pick up the pace and reveal more to the reader. The art needs some major improvement or it could start to drag down the interesting story. In general it’s still worth picking up and is a great crossover that isn’t from the Big Two.