Who do you go to when your current security isn’t up to par? Say for instance they’re all killed by a sniper in public and you are shot in the shoulder. That’s the initial set up to the second Volume of Executive Assistant Iris which begins Aspen’s cross over event The Hit List Agenda. The volume features Iris and several new characters in her universe.

This story begins with introducing Diane Coverdale and her life. Diane is described as one of the most powerful women in Los Angeles, California. She takes over her late husband's company. A business once led by his family, the company's Board of Directors assumed she’d simply take the money and leave. They were very wrong. 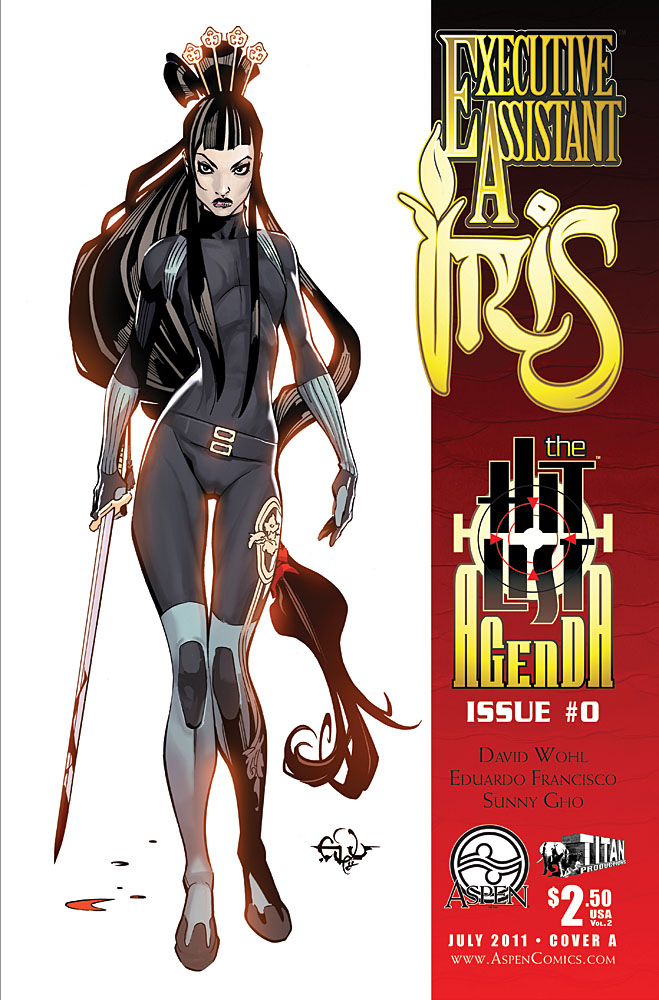 In the story, drama quickly insues when she attends a public event. A sniper appears and without any warning, shoots Coverdale in her shoulder. He proceeds with killing every one of her security officers. Iris’ employer masterminds the attack. Their intent was to eliminate Coverdale's protection as well as put her at safety risk. Coverdale tracks down the school that trained the sniper, and and bids on a student until she is hers; just like they wanted.

Executive Assistant Iris is an interesting narrative from Iris, but it’s really here just to tease at what’s to come next. There is no character development, and Coverdale is the only character known to the reader.  David Whol succeeds in making a successful zero issue that attracts readers to continue picking up the main series.

The art was very good. The opening page has a great layout. It features a limosine with it's roof down on a street with the credits . Just something about it is very catchy. The rest of the book is well set up as well, especially when it bounces back and forth from Coverdale and the Assassin. Eduardo Francisco struggles on the female form at times, particularly describing women with similar styles and hair lengths. For example, when Iris was fighting one of the students, readers could be confused, as the victim and another character had very similar features.

The color expert, Sunny Gho, does an average job. He fills in backgrounds with common color hues. It adds nothing to the book. For example, a black background would have been more interesting to look at rather than his choice of orange-brown smudges. The background coloring is particularly bad when the assassin and Coverdale had common colors. Even though the assassin was in a different room with different lighting, the color was too similar. The room returns to its original coloring, it’s as if he was trying to show that the assassin and Coverdale were now on the same timeline or trying to link the two scenes, but he failed to do so.

Again this is just a zero issue and the real meat of the story is waiting to be told. I am interested to see Aspen tackle so many of these tie-ins and how the story will play out. Right now I’m interested and that’s exactly how it should be after an introductory issue. The best part is that with this chunk of the story out of the way, we no longer have to worry about some of the boring facts being drawn out in the first issue.

Be sure to check out the preview for this issue as well.