The action is this book is so crazy it’ll have you laughing out loud as people’s head explode and Leon the Professional type scenes play out before your eyes. This book really kicks the Hit List Agenda into high gear as a new executive assistant is introduced… Orchid!

The issue opens with an arrogant son of a South American crime lord as he approaches another crime lord to proposition a deal with him. The crime lord has no patience for the spoiled brat and sicks his men on him. Umberto the deficient son unleashes his father’s assistant Orchid upon the men and she goes to town killing practically every one. She leaves the crime lord alive so that Umberto can strike a deal with him finally. 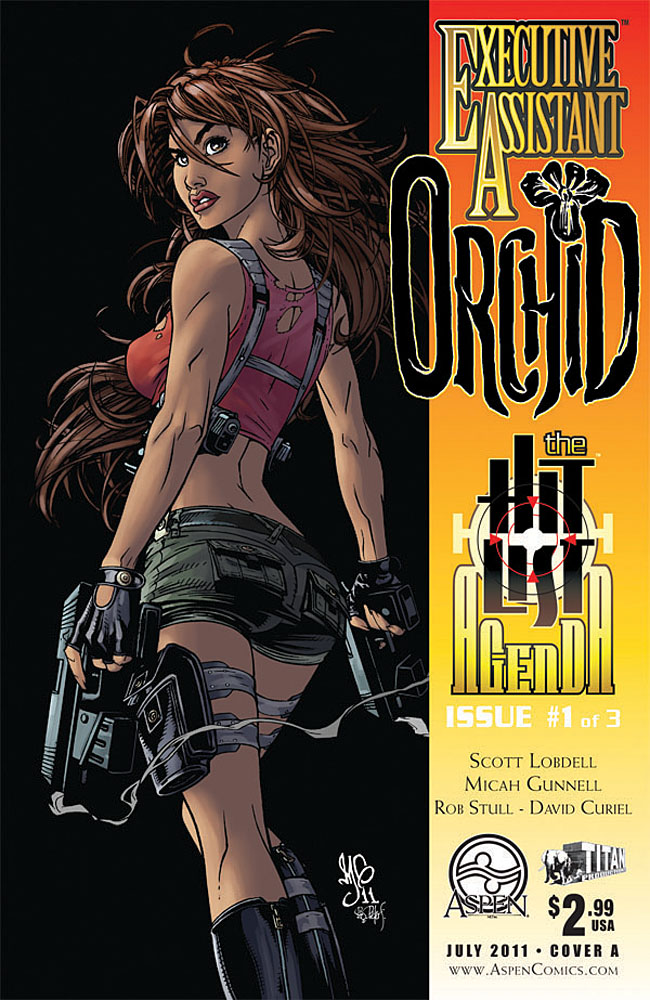 Next we see Umberto wrapping up a sexual encounter with Orchid, who is forced to do whatever her employer wants. Umberto is still the spoiled brat as he now thinks he’s god’s gift to woman after requiring her to have sex with him. Way to go Umberto! Orchid is then called upon by his father and after being scolded sent on another mission to make things right in his eyes. The best part is that she’s only allowed to do what she’s told then hit for doing what she’s told. It’s a bit ridiculous, but it establishes the life she leads which I’m sure is important later in the story.

We then met one of the richest and most powerful men in the world and see the gorgeous figure of a woman’s legs. He says she has a job for her and we can safely assume that the woman is his executive assistant. Orchid on the other hand is sent to gather a man in charge of large Texas Company. Orchid disposes of his body guards with ease and puts a knife to the man’s throat to show that she really means business.

The issue has ridiculous characters that are so over the top sexist you can’t help but instantly hate them. And really that’s why they’re there. If not, you wouldn’t be able to sympathize with Orchid as she kills entire villages of people or guts rooms full of body guards. There needs to be a bigger bad guy and writer Scott Lobdell succeeds in doing that. Also he packs the issue with so much over the top assassin action that it’s hard not to love the book.

This book gets pretty graphic which was surprising since Aspen has never really gone this route before. Artist Micah Gunnell does a great job of not only keeping Orchid looking beautiful, but delivering on some truly awesome kill scenes. In the beginning of the issue there is an awesome panel in which a man is shot through the eye and the side of the mouth and really I had to double check that I wasn’t reading an Avatar Press book written by Warren Ellis, it was that bad ass. Gunnell does a great job of keeping that sexy Aspen style to the book and making it work with the action and the gorish kills.

Iris may not be delivering much in the way of story or action just yet, but Orchid is definitely kicking things off on the right foot. Sure the story is a bit secondary to the action, but it’s still very solid and adds to the overall story a lot. The action is awesome and some of the best action sequences in comic today. If you’re interested in The Hit List Agenda then do not miss out on this issue.