Exile: Blurring The Line Between Comic Book and Game

The comic book industry has recently been scrambling to find a way to make their product more suitable for the 21st century, and has spent the past couple of years experimenting with “Motion Comics” that readers can play on a computer, iPad, or DVD player.  They use limited animation, combined with voiceovers to present the comic like an animated film.  There have also been a few attempts at interactive comic books; I’ve never been a fan of this sort of project, preferring to just read the comics in their intended format.  I recently tried Exile a game/comic made by an independent game developer that is bridging the gap between interactive comic, and video game.

Exile uses an interface which looks like a comic book, it has panels, margins, even what looks like a spiral binding on one side to give the impression that you are reading all of this in a sketchbook.  It tells its narrative much like a motion comic; panels of a comic appear, a bit of animation will play, along with simple sound effects (No voice work).

However, there is a bit more interactivity required from the player/ reader in Exile.  After a few panels, the story will stop at some dramatic point, and an icon appears in the margin of the book.  The icon depicts something within the panel you’re reading, and you’ll have to find and click on the right object to start the story again.  For example, a goon will be show in panel pulling out a gun.  When the player clicks on the gun, an animation of the it firing will play, and the story continues.

This might seem like it brings the story-telling to a halt, and, honestly it does at times.  However, it’s usually rather entertaining, and a clever reader will be able to quickly find and click on what they’re supposed to find, so that the story continues without awkward pauses. Once you’ve finished playing your way through an issue, you can unlock features and minigames if you go back to click on hidden things in the comic.  Granted, this isn’t a huge amount of interactivity, but it’s a solid step forwards in terms of this sort of story-telling.

As for the story itself, Exile is set in the future, where the government has developed technology to create portals to other planets.  Since then, the portals have been used to get rid of Earth’s refuse- including criminals.  Most of Exile is set on another world that is quite a lot like earth.  It is populated by criminals, but also by a race of hideous fish men.  The fishmen might be the natives of this world, or perhaps mutations resulting from toxic waste sent through the portals.  This and numerous other story elements haven’t been clarified yet.

What has been made clear is that, somehow, a strange young girl has gotten through the portal and is wandering through the city of prisoners.  There are no women, or children here, so her appearance draws the attention of our protagonist, Ford.  Ford is one of the few relatively good men here, and the toughest guy in town.  He reluctantly works for the mysterious cult of fishmen who are waging a gang war in the city.  However he decides to become the girl’s protector before the end of the first issue. 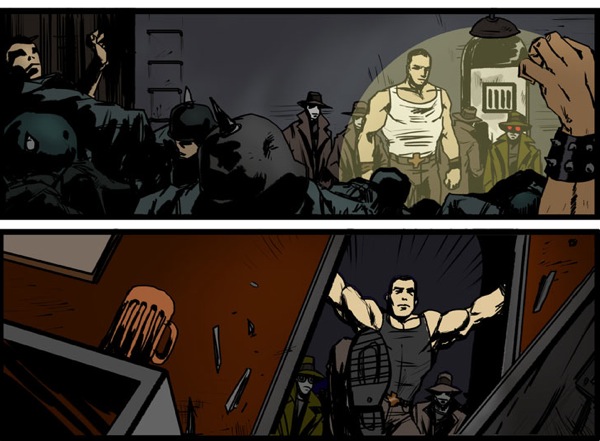 That’s right, Exile is made in “Issues” which are each about the same number of pages as printed comic book, and take about 15 minutes to play through.  It is only on issue 2 right now, and there’s a lot of information not yet revealed.  Particularly puzzling to me is how a planet full of criminals can have an industrialized city, with electricity and cars.  It isn’t explained just how the criminals are getting their food, fuel, and the ammunition for their guns.

I’m certainly willing to stick with Exile for a few more issues.  Granted it isn’t an example of brilliant gaming, and it wouldn’t catch my eye if it were in paper, on the shelf at my local comic shop.  However the interactive format Exile uses is enough to make me overlook any faults it has, and offer my support to its developers.  Exile is going for $4.00 at some digital distributors likeImpulseDriven.com, but Exile’s own website www.OurNewGame.com is holding a “Pay What You Want” sale at the moment. 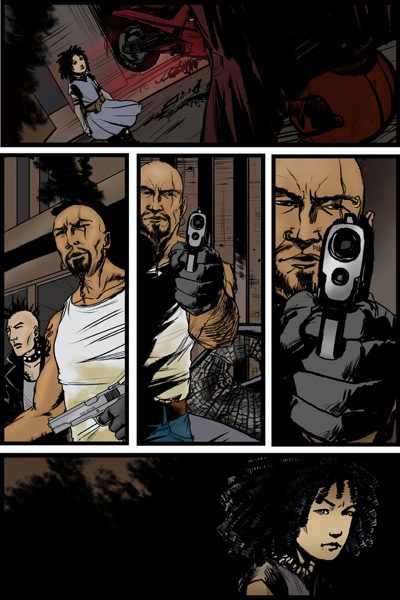