Eye in the Sky review

"Are there no victims when fighting a war from a distance? "
By: Russ Matthews | Movie Reviews | February 7, 2016
"The first thing to be abandoned in warfare is the truth." Is that still a true statement in modern warfare? Drone warfare may be handled from a distance, but it still involves very human situations and has the same implications of all war. 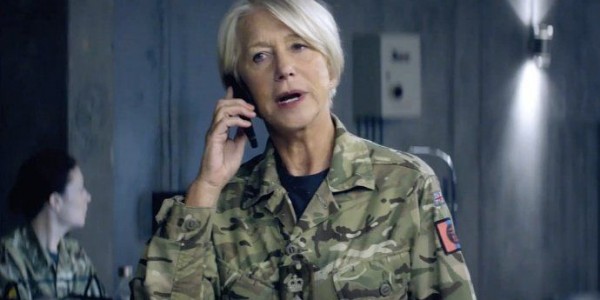 Colonel Katherine Powell (Helen Mirren) is having a difficult time sleeping and it has more to do with her job than with her husband's snoring issues. She oversees the UK-based military drone operation that targets international terrorist cells. This morning brings together efforts that have transpired over six years of work and she has the opportunity to apprehend some of the most wanted international terrorists in one operation. Through the coordinated efforts of the politicians, military leaders, lawyers and drone pilots, the team seeks to capture these terrorists while they operate within the borders of Kenya. Utilising state of the art surveillance equipment and on the ground intelligence officers, they find the group that they have been tracking, but find that the group is planning a much more sinister action. Colonel Powell makes the judgement to turn the effort from a 'capture' to 'kill' operation. While the politicians and lawyers confer to consider the collateral damage and cost/benefit analysis, the military matriarch must convince her team to go ahead with the new orders. After a multitude of deliberation, actions get into motion and then realities of humanity get in the way with a little girl selling bread. This one innocent activity brings to head the moral, political, and human tension of modern warfare. 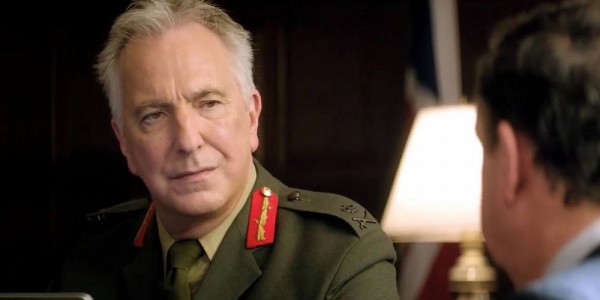 With the advancement of technologies and weapons, warfare in this era provides amazing considerations for high drama. The challenge for film makers with drone warfare and the on-line political management of war zones, is making these battles as compelling as war films of the past. Director Gavin Hood (Ender's Game) shows that war is never victimless and that even with the distant manner of fighting these wars, it is impossible to eliminate the human component of these strategic campaigns. In his last on-screen performance, Alan Rickman (Harry Potter series) joins an excellent supporting cast of characters, but the strength of the story is found in the on-the-ground experience in Kenya. Believing the capabilities of the armed forces to be able to manage the worlds problems from afar is not a surprise, but seeing how it can effect the every day lives of people is what will draw audiences into the drama. The heart of the story can be found in the innocent eyes of the young Kenyan girl. Without her knowledge, she becomes the catalyst for this international incident. The ethical and moral decisions that these soldiers make stress each human thread of those involved in this endeavour. It gives a face to the people who do not choose the life they have been given and are merely trying to get by despite the situations occurring near their homes.

The message of this cinematic military experience becomes a reality check on the human values and moral implications of our movements and their decisions. The drama is well managed, but may seem a bit underwhelming in comparison with other battlefield dramas. It is a thought-provoking experience that will leave many feeling conflicted on the topic of international safety and the war on terror.
Rating
7.0
Pros