The F.E.A.R. series is technically a shooter, but it’s also full of horror too.  The first game in the series had players wetting their pants every time a little girl walked by (Or so other players tell me).  In the latest installment in the series, the development team, Day 1 Studios have added a new cooperative multiplayer mode that has players form a team to run, shrieking, from an un-killable wall of death, while an endless army of armed goons tries to block their escape. 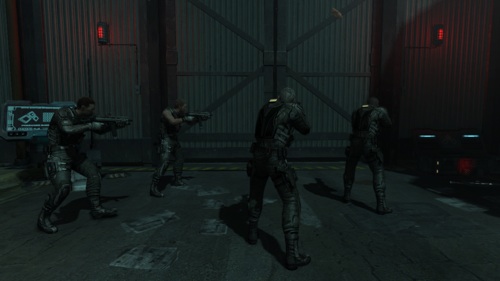 F.E.A.R. 3 is being developed by an entirely different team than the original game, but it will still have the slow-mo power that was a ground-breaking feature when the series debuted, and the new game will add in a cover system too, which is now becoming a pre-requisite for shooters.  It will also have many of the traditional game modes that shooter fans are already familiar with.  There’s a single-player campaign mode, a co-op version of the story, and online multiplayer mayhem.  However the game also has a fairly unique new mode for groups of players to participate in, cooperatively. 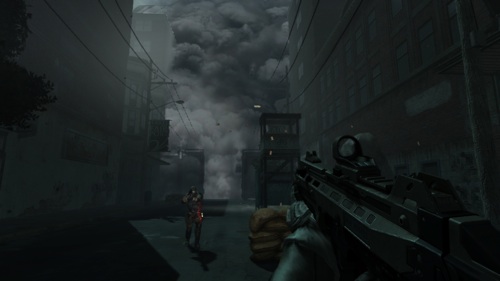 Think of the new mode as much like Left 4 Dead, but with a strong kick in the butt to keep the players moving as fast as possible.  In a hands-on play session at PAX East I and a few other frantic gamers found ourselves starting this new game mode in a safe house where we could select our preferred set-up from a small allotment of equipment.   As soon as we were properly armed, and exited the room, we found a giant wall of shrieking evil chasing us through the streets.  Ahead of us were ambushes consisting of gunmen who weren’t there to kill us, but rather to slow our escape.  Instead of dying from gunshots, we were just incapacitated after taking enough damage, and required a teammate to come to our rescue when one of us took too many bullets.

Unfortunately, if even one member of the team was gobbled up by the wall of terror, the whole team wiped out, so there was no way that we could just ditch anyone who fell behind.  This added a major incentive for playing with genuine cooperation, even more so than in other recent co-op horror shooters.  This isn’t about being the sole survivor of the final wave, or limping to a safe house where your buddies are miraculously revived.  This mode is about making sure no one gets left behind.  Otherwise you all get eaten by horrors man was not meant to know. 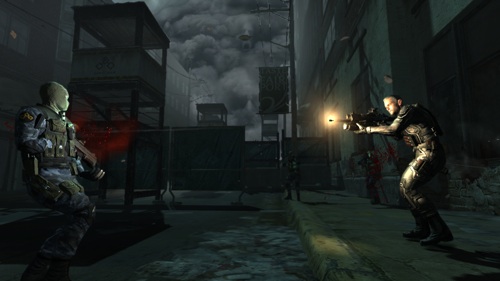 Alas with four players who were complete novices, we suffered a series of short brutal wipeouts.  Yet, in that brief time, my heart was racing, and I was filled with blind stupid panic the likes of which I’d experienced in few games.  This frantic sort of gameplay left little time to experiment with the new cover system, since carefully poking out to take potshots would give the wall of horror plenty of time to reach us.  However there certainly seemed to be good shooter mechanics at work that will be interesting to explore in the less-frenzied campaign mode.  We’ll be back with a full review after F3AR hits store shelves on May 24th.