The Fable franchise is famous for some serious pre-release hype. Before each installment releases, Peter Molyneux tantalizes us with features that never seem to make their way into the finished product. In the first Fable, it was the promise of an acorn that could be planted and would mature into a full tree over in-game years. The exclusion of the acorn was did not particularly hurt the game’s sales, but it became a moniker for the broken promises that have plagued the Fable series. Fable III was announced to be compatible with Kinect (Natal at the time) but development constraints would keep the Kinect features from seeing the finalized product. Despite this, the latest installment in the franchise manages to shake any negative effects and emerge looking like a healthy step forward for the franchise.

Fable III takes places approximately 50 years after the events of the second Fable game. The old Hero King has died and his son, Logan has assumed control over the kingdom. Logan presides over Albion as a tyrant; a land where extremely high taxes and cruel treatment are driving the citizens to an early grave. You assume the role of the younger brother of Logan and are the prince of the kingdom of Albion. The people are crying out for a hero, and after your mentor, Sir Walter, helps you realize your heroic potential you begin to build the foundation for a revolution.

Our hero controls very well. Melee attacks are mapped to the X button, Gun attacks are mapped to the Y button, and magic attacks are mapped to the B button. Holding down any of the buttons charges up the standard attacks and creates a “flourish” attack. These attacks are generally unblockable and can be used to take out enemies with ease. A new feature in Fable III is the ability to combine two magical gauntlets to create new types of attacks; Fireball and Vortex gauntlets create a whirlwind of fire, while Shock and Blades will fire shock swords that lock on to enemies. These combination allow for up to 15 different attacks to devastate all who stand in your way. The controls all work very well, except that occasionally the hero will swing his sword or shoot in the wrong direction than you are directing. This doesn’t happen that often, but it does happen enough to possibly make you lose a close battle or two.

The real centerpiece of the Fable games is the moral choice system. You are presented with moral quandaries throughout the game and can choose to resolve situations in what basically boils down to a good or evil manner. You may be asked to risk your life for someone else’s or let them die, and whatever you choose will affect how the people in the kingdom view you. If you are evil, people will cower in fear and be far less likely to like you and help you. If you are good, then people are more likely to strike up friendships with you and will help you with gifts or quests. This system works very well, but it does have a slight problem that has been present since the first Fable game; the choices that you have are at two extremes. You are basically presented with choices similar to “kill this person” or “spare this person,” and are given very few choices that offer any moral ambiguity at all. The only exception to this rule is at the beginning of the game where you are given a choice to save a group of strangers or save someone you love. It would be nice to have a gray area amid the extreme choices that you have to make; choices that would make it difficult to discern the line between what is right or wrong.

On your road to revolution you have to gain the support of all the major cultures of Albion. The mechanic to this is quite simple, as you complete tasks that they need in order to prove yourself to be worthy to overthrow the king and you gain the support of the rebel leaders. As you complete quests you will gain “guild seals” which are the equivalent of experience points in Albion. You use these seals to open treasure chests ethereal path, for instance, you may have to pay 60 guild seals to open a chest to upgrade your melee damage. The “Road to Rule” as the path is called, mirrors your quest to claim the castle from your brother Logan. As you gain supporters, you will unlock more and more sections of the road until eventually you reach the castle on both the “Road to Rule” and in the real world Albion. This streamlined leveling system will appease those new to the series, but may alienate older fans looking for a way to fine tune their character’s stats. You can wait to open certain chests or not open them at all, but the majority of chests, especially the combat chests, need to be opened as soon as possible to avoid being outclassed by the tougher enemies. Those looking for an in-depth stat building will not find it, but there are so many other activities to focus on that you may be thankful that you have one less thing to worry about.

The world of Albion consists of about 7 or 8 major towns that you can explore, quest in, and even dabble in the real estate market. The majority of the game will be spent trying to gain support for your revolt, but along the way you will encounter various other quests that really help round out the game. The quests in the game generally fall into three categories: Main quests, relationship quests, and side quests. The main quests are, of course, essentially to the story progression of the game. The relationship quests are needed to take a relationship to the next level. They usually require a gift to be bought, or an item to be delivered; these quests generally do not give much experience and are usually forgettable and unimaginative. The side quests are where the game really shines as they allow the full character of the game to be revealed. The quests allow for narratives outside of the main storyline to be explored and will have you doing everything from killing garden gnomes that have been brought to life to being miniaturized and fighting in a loose interpretation of Dungeons and Dragons. These quests really allow the humor to shine through and most of the quests are incredible to play through and the variety will you keep you entertained for hours and hours.

Fable III is not perfect by any stretch of the imagination, sometimes small graphical glitches occur and occasionally the game will temporarily freeze while saving. The frame rate will chug and for a variety of reasons. The game doesn’t even feature a pause menu, instead replacing it with a “Sanctuary” where you can look at your weapons, money, and buy downloadable content and jump into another player’s universe. This feature works well, but having to constantly go there when all you want to do is switch a gun or change your outfit can get annoying. 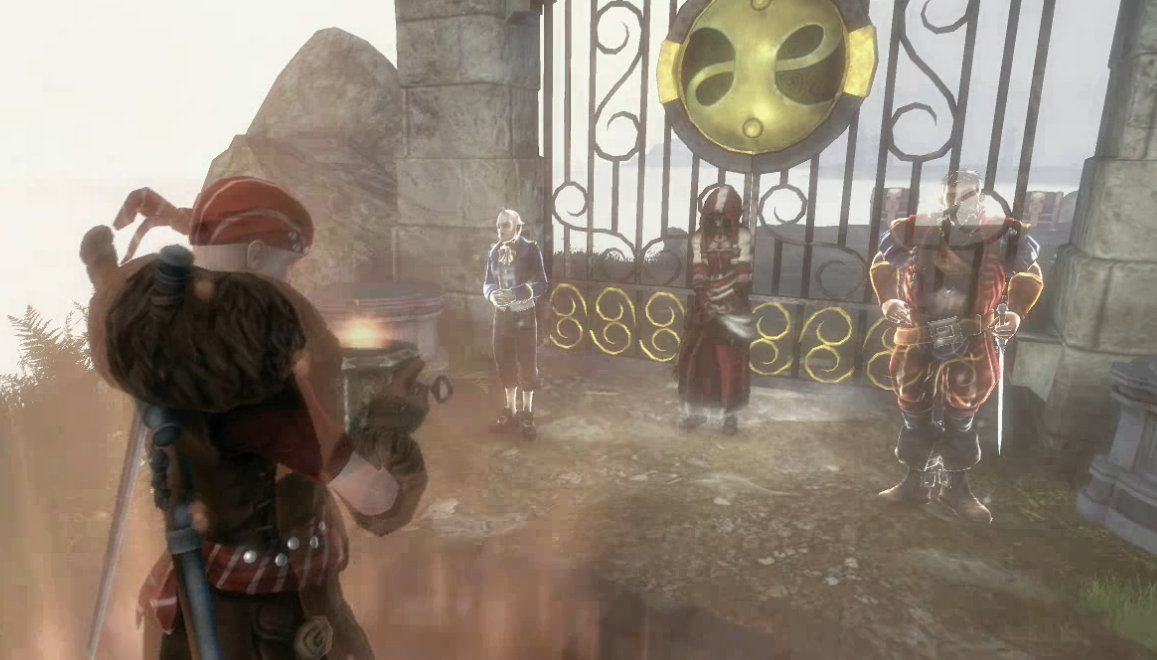 In spite of these flaws, the game is simply fun to play, and all the mechanics that have worked in previous Fable games have been updated and overhauled. It’s easy to get married and make friends. You can still make children and even adopt children this time around, and just like in Fable II you can join your Xbox Live Friends as they make their way through their own personal Albion adventure and can even marry, start a business, and simply kill some mercenaries together. From the main map you can also buy, rent, and sell real estate without having to physical be where the property is. This allows for a larger measure control of your fleet of properties, and eliminates the need to stand in front of the actual house or business to manage prices.

Fable III is the longest of the Fable games, and it manages to do so without ever feeling like the length is added to appease fans who had complained about short campaigns, especially for an RPG. The narrative flows smoothly, the voice acting is exquisite, and the humor pours out of almost every scenario. This may quite possibly be the game to finally satiate the rabid Fable fan base and maybe they can finally forgive Peter Molyneux for those broken promises. The mold isn’t broken with Fable III but it is starting to be reformed entirely and I, for one, am extremely excited to see where the series is headed. Fable III seems a lot closer to Molyneux’s original vision of the first Fable, and it does not disappoint with its charm and pure sword wielding fun.