By: Woolf | Movie Features | February 15, 2012
Everyone wants to be a spy. A life filled with globetrotting adventure, cool toys, and the thrill of living on the edge has had appeal for generations, but spy fiction is often dependent on the era it comes from. Today’s spies have been refined from decades of camp and bombast into a class of agent that emphasizes style, efficiency and realism.

But who is the best modern spy? We’re pitting eight undercovers, secret agents and assassins from the last decade head-to-head to see who the best modern operative is. So screw on your silencers and dirty up your martinis, it’s spy vs. spy, and only one can be the best. 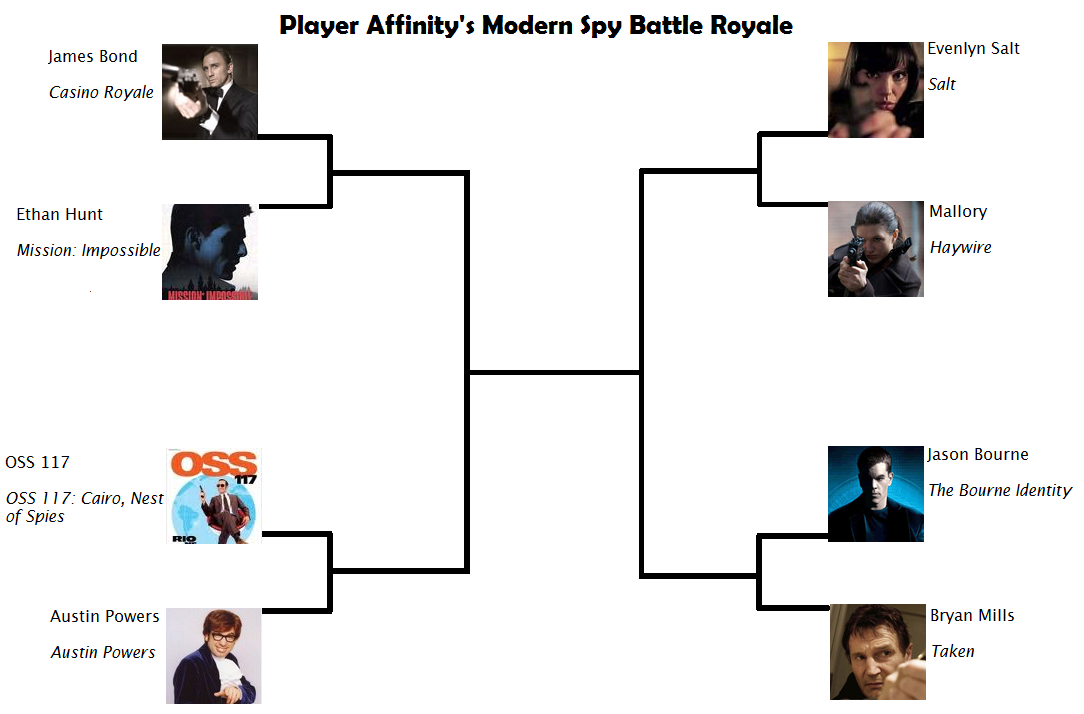 The competition kicks off with a couple of espionage stalwarts. One is among the most recognizable characters in all fiction and the other won’t get out of bed for a mission that’s anything less than suicidal. Slipping your way into an evil lair or impenetrable fortress is a must on any spy’s CV, but these two differ in tactics. Hunt often has a team at his back giving the play-by-play, while Bond prefers the head-on approach that employs charm and bravado to get in close with the bad guys. Bond might show a complete disregard for what they teach you in spy school, but Hunt’s overreliance on his team’s tech (like the ridiculously overused face masks in Mission: Impossible II) means that Bond’s silver tongue is the more reliable asset.

In one corner we have Jason Bourne, forgetful assassin, 5' 11" and 207 pounds of amnesiac beef. Towering over him is Bryan Mills, 6' 4" and a comparatively lanky 210 lbs. Each trained by the CIA for use in firearms but both unafraid to unload with their fists when the opportunity presents itself. Bourne is certainly the more clinical fighter, employing a range of fighting styles to disarm opponents before ruthlessly disabling them with pens, books and even magazines. Mills on the other hand is the scrapper of the two, as evidenced by the climax of Taken, when he jumps through not one, but two sheets of glass to take down his targets, all while pretty seriously injured (by the standards of mere mortals). Mills definitely has the size advantage and shows a remarkable immunity to pain, but Bourne is almost unstoppable in a fight, and his ability to turn just about anything into a lethal weapon gives him the edge.

Pink slips from covert agencies are usually delivered from the barrel of a high-powered sniper rifle, but spies are better at cashing in on payback than unemployment benefits. You’re just asking for trouble by betraying Evelyn Salt, a CIA asset forced to take matters into her own hands when accused of being a KGB sleeper agent. Salt has to prove her innocence as persona non grata for two of the world’s dominant superpowers, a feat that relies on some truly labyrinthine plotting and a casual disregard for physics. Dealing in less apocalyptic terms is Mallory from Haywire, a black ops wet-work specialist who gets around the glass ceiling by shooting it out from under the higher-ups who framed her. Both show considerable skill under the pressure of being disavowed, but Mallory edges out Salt for the sake of realism. She doesn’t risk starting World War III with her plans, and Gina Carano is so intimidating that she actually has to tone down her physicality.

Any spy worth his salt is a master of cloak and dagger, but it never hurts to know your way around the sheets either. Spy fiction is dominated almost exclusively by the ridiculously attractive, so it’s no wonder agencies get into bed with one another in every sense of the phrase. Two masters of the art of seduction are swinging secret agent Austin Powers, and the roguishly handsome OSS 117. Each is a quite a hit with the ladies despite a critical flaw: Austin isn’t traditionally good looking, and OSS 117 is flagrantly un-PC, even by early '50s standards. It’s a clash of decade sensibilities, but this one’s pretty simple. Jon Hamm is one of the sexiest men out there when he’s playing Don Draper on Mad Men, a show that straddles the time gap between OSS and Austin, and Don clearly took style lessons from the former, not the latter.

Stay tuned for the next round of Spy vs. Spy!