The Fade Out #3 Review

"The New Girl"
By: Jim Bush | Comic Reviews | November 16, 2014
In The Fade Out #3, writer Ed Brubaker and illustrator Sean Phillips shift gears in an unexpected way. Most of the first two issues of the series so far have been showing the insider world of a Hollywood movie production during the 1940’s while also setting up a mystery involving the murder of rising actress Val Sommers. In issue #3, the creators give us an entirely new point of view – Maya Silver, the actress who is replacing Val. 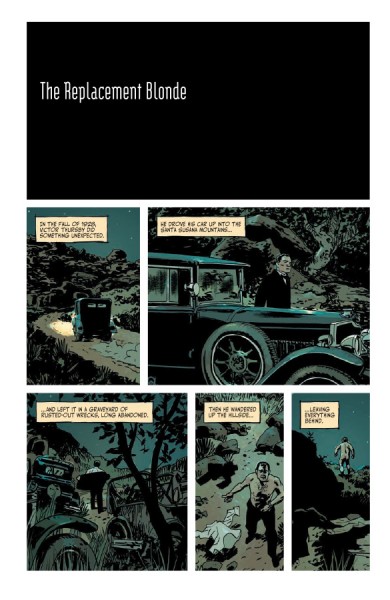 The Fade Out #3 doesn’t entirely take place from Maya’s story. The issue starts with a flashback to some backstory on Victor Thursby, who in the late 1920’s joined a California cult that engaged orgies of sex, drugs, and drinking. Although Thursby later returned to normal society and eventually founded Victory Street Picture, the studio that is making the movie that The Fade Out is chronicling, he still longs for the freedom and bacchanalian pleasure of those days. The irony of this flip is that as the head of a movie studio he is now one of the most powerful people we’ve encountered in the story.   Thursby’s story dovetails in The Fade Out #3 with that of Maya, who beat out a large number of aspiring starlets to replace Val Sommers. It’s established that she’s a shoo-in through some sort of machinations by her agent, Tom Greavey, though it’s not entirely clear what those are. Maya does get the part, but her life isn’t exactly easy. Thursby, who clearly had some sort of bond (it’s not clear if it was sexual or not) with Val, goes to Maya’s dressing room. Maya is ready to have sex with the old man, but he’s repelled by her choice to remove all body hair and leaves her dressing room. It’s later revealed that Greavey knew this would happen and had advised Maya to go “dolphin smooth,” to use the catchphrase of The Walking Dead’s Abraham, to deflect Thursby’s advances. 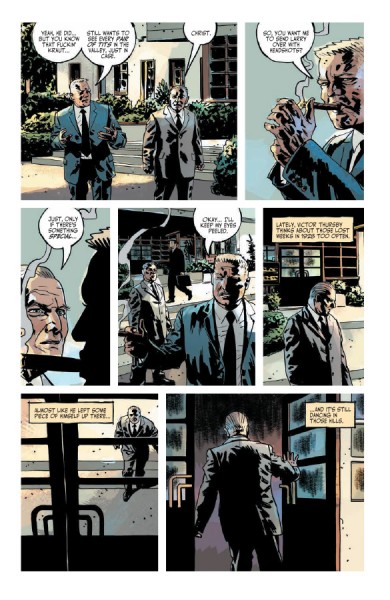 Things at home aren’t particularly easy for Maya, either. Armando Lopez, Maya’s trumpet player husband is angry at her and slaps her around. They argue and it’s revealed that Armando had taken money from Greavey to disappear, so that Maya doesn’t have a husband. Maya was hurt by Armando taking the money, but it seems that she would rather be away from Armando. Just as he is about to leave, Phil Brodsky, the studio’s head of security (and basically a “fixer”) arrives, through a tip from Greavey, to beat up Armando. It’s clear that Armando won’t be bothering Maya again.   There are many uncomfortable instances of people being used or using themselves in The Fade Out #3. There is a great deal of sexual subject matter (though there isn’t much sex) in the issue, and it’s clear that Maya has had to sleep with some people in her struggle to “make it.” Brubaker and Phillips walk a fine line here. On one hand, the story of the old Hollywood “casting couch” is a familiar one and one that runs the danger of implying that all actresses had to act this way for a break. On the other hand, they’re showing, in the messy, everyday detail, how hard it was for actresses to get into show business at the time. 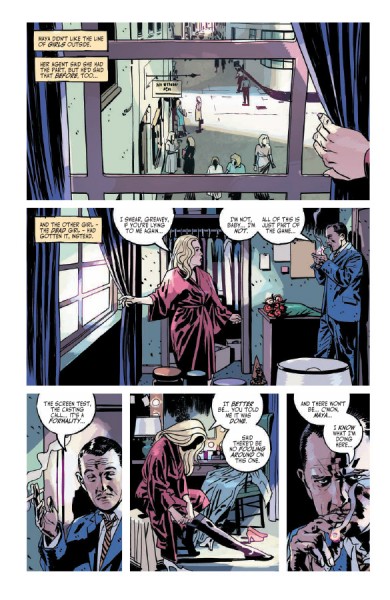 The use of sex in The Fade Out #3 might not actually feel so close to being exploitive if it wasn’t for the preponderance of nude breasts in the issue. There are a lot of them. Brubaker and Phillips are clearly getting to do whatever they want in this series, so the topless panels are not there to sell issues, but it feels at times like all of the nakedness is unnecessary and is there to be “mature,” in the way that HBO series try to throw in some nudity into the first episode of a new series, just because they can and to show you that they’re not cable.   Phillips’ art is good in this issue in some interesting ways. Some artists have difficulty drawing character faces in consistent ways, so that some characters start looking the same. Even though Maya is replacing Val, Phillips makes her look consistently distinctive from Val. He’s also able to demonstrate some of Maya’s tough, brazen personality in her looks, too. There could perhaps be fewer boobs, though. 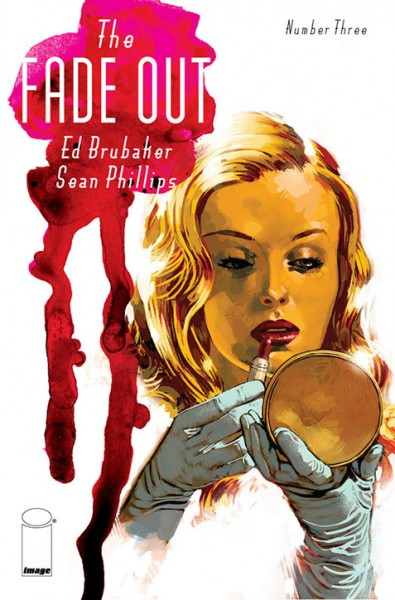 The Fade Out #3 is a strong issue, one that initially feels quite different from the first two chapters of the series. The more I thought about and reread the issue, though, I saw the complex storylines and characterization being done here. It also immediately expands the world of The Fade Out beyond heartthrob actor Earl Rath and writer Charlie Parish, which is nice. I imagine the murder of Val will still play an important part of the upcoming issues, but this is an effective diversion into some other players in the series.
Rating
8.2
Pros